Wanted to get some camera comparison samples of all the current flagship smartphones? Seems like your prayers have been heard. Here are the camera comparison images of Samsung Galaxy S5, HTC One M8, LG G2, iPhone 5s, Sony Xperia Z1, and the Nexus 5. 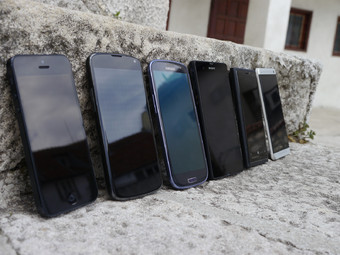 According to this camera comparison test, Samsung Galaxy S5 has by far the best color representation, capturing most of the screens with great accuracy especially in proper light. The images taken from iPhone 5s look pleasant as always, while the HTC One M8 delivers rather mixed results. However, we suppose that HTC One M8 will probably win over the smartphone photography club as it has already created some fandom with the predecessor HTC One M7.

This camera comparison test is conducted by Phone Arena and shows picture results of these flagships in various conditions. This test claims that LG G2 can get you the best color fidelity among all the other smartphones, while other times it demands a few takes to churn out the best results. Sony Xperia Z1 and Google Nexus 5 are also included in this camera comparison test. We understand that you are expecting to see Xperia Z2 in this list rather than Z1 but expect to get in the list sooner too.

Here are the camera comparison charts and image galleries for you to decide which one would you go for if you are looking for the best smartphone camera in the currently available club: