First rumored to be named Android 5.0 Lollipop, turns out Google is going for some pie. Quite a few leaks have hinted that the next OS is going to be named Android 5.0 Lemon Meringue Pie. While we personally favor the shorter titles like KitKat and Lollipop, we can't be ungrateful to some meringue pie too. It has been a few months when Google announced the new design ideology and mobile OS in the shape of Android L under the tag Project L. Google shared some beta versions for testers to try out the mobile OS, however, we are spotting the latest version of Google's mobile OS on a Nexus device.

This latest leak mentions a codename for the Android L - LRW50D - which has been spotted on a NEW Nexus 7. Google internally uses short codes for the OS which denotes to both the name and the chronological order of the development of OS, as fellows at phonearena have mentioned: In this case, L stands for Android 5.0 Lemon Meringue Pie:

"Lemon Meringue Pie Android build, codenamed LRW50D, has been noticed in the Chromium issue tracker. Ever since Android Cupcake, Android builds have carried such short internal titles, which follow their development chronologically. "L" here stands for the Lemon Meringue Pie in question, "R" is for the code branch that the build originates from, "W" indicates the third quarter of the year, and, finally, the number 50 are the days going into the quarter, which would peg the LRW50 release happening on August 19th, while "D" is the fourth edition for that same day." 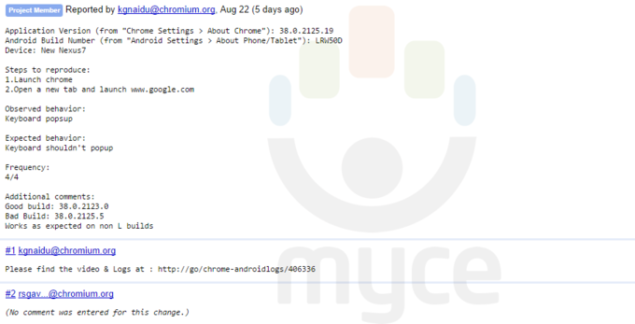 The New Nexus 7 that the screenshot mentions is possibly the ASUS Nexus tablet, although earlier we saw some rumors indicating that the new Android 5.0 Lemon Meringue Pie will be debuted on HTC Nexus 9.