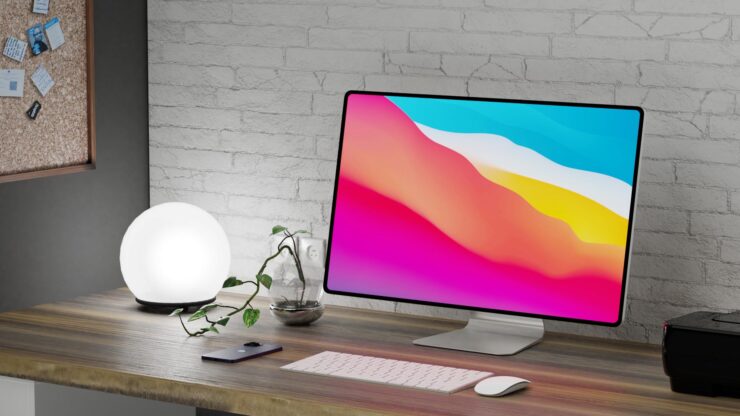 Apple’s November 10 ‘One More Thing’ event is just two days away, and if you were hoping to see some redesigned iMac models, unfortunately, that isn’t going to be the case, according to a previous report. Apparently, the first two machines expected to feature the custom Apple Silicon are the 13-inch MacBook Air and the 13-inch MacBook Pro. It’s rumored that the first redesigned iMac would arrive during the first quarter of 2021, and if you experience a first glimpse as to what it might look like, both the 24-inch and 32-inch versions of Apple’s ‘All in One’ are illustrated in this beautiful concept.

It looks like Svetapple must have taken its sweet time with these 24-inch and 32-inch iMac concepts because they look nowhere near what the current model looks like. If you head to Apple’s website right now, both designs are worlds apart, with the latest concept displaying razor-thin but uniform bezels. It kind of looks like the concept has been inspired by the 2020 iPad Pro models since both the 24-inch and 32-inch iMac concepts also sport rounded corners.

The base doesn’t appear to be altered as it continues to feature an aluminum stand, which is excellent since it will deliver additional durability while touting that premium look. Also, the thickness of both the 24-inch and 32-inch iMac concepts has shrunk compared to the current-generation machine. That’s likely because Apple’s rumored A14T chipset, which is said to be made using TSMC’s 5nm node, will be efficient enough to dissipate heat without requiring such a comprehensive cooling solution.

Considering what leaked A14X Bionic benchmarks have shown us, it looks like we should expect some serious firepower from these Apple Silicon iMacs. Still, it looks like you’ll have to wait a while for these to be officially unveiled. Then again, if you don’t want to purchase the new and redesigned iMac and if you’re patiently waiting for Apple’s most powerful machine, there’s a chance you might get what you need, but in the future.

We say this because Apple is rumored to release a Mac Pro sporting custom hardware, and best of all, its size will be much smaller than the current Mac Pro. We’re sure we’ll come across a Mac Pro concept in the future, but for now, let us know down in the comments what you thought about this one.