One device that's expected to set the tone for Chinese manufacturers is the Xiaomi Mi Mix 3. The smartphone features semi-regularly on the rumor mill. While we haven't seen many leaks about its specifications, the details that do surface are eager to provide us with details of a feature that's become very popular with Chinese manufacturers.

Companies such as Oppo are experimenting with a new feature that hides a smartphone's front camera. This approach manages to target two birds with one stone. At one end, it allows them to launch smartphones with minimum bezels, and additionally, it also removes the necessity of a display notch; a feature that has witnessed strong backlash among Android users. Now, we just might get Xiaomi's take on the entire matter. Take a look below for more details.

If there's one thing that's certain, it's that Xiaomi and its CEO Lei Jun are heavily impressed by Apple. This isn't a bad thing despite the Western emphasis on originality, as Apple's approach towards consumer electronics, in general, is different from other companies' take. Xiaomi too loves to emphasize the importance of design in a smartphone and resultingly has influenced the global smartphone market.

The original Mi Mix started off the bezel-free approach, design language now also present on Apple's premium iPhone X; a fact that should definitely make Lei Jun smile as he goes to bed every night. But this isn't where it ends for the Mi Mix lineup. We've seen a lot of 'leaks' - both fake and real for the Xiaomi Mi Mix 3 so far, that are eager to emphasize on one particular feature for the smartphone.

The big question on everyone's mind is, that if the Mi Mix 3 really does exist, then will Xiaomi equip the smartphone with a front pop-up camera? The company's had the patent for quite a while and by the looks of things, it's pulled off an Apple. Xiaomi chose to let other manufacturers launch their gadgets with this feature first to have some research points in respect to the Mix 3. Now, if today's teaser is authentic then the possibility of the Mi Mix 3 with a front camera setup just went up. 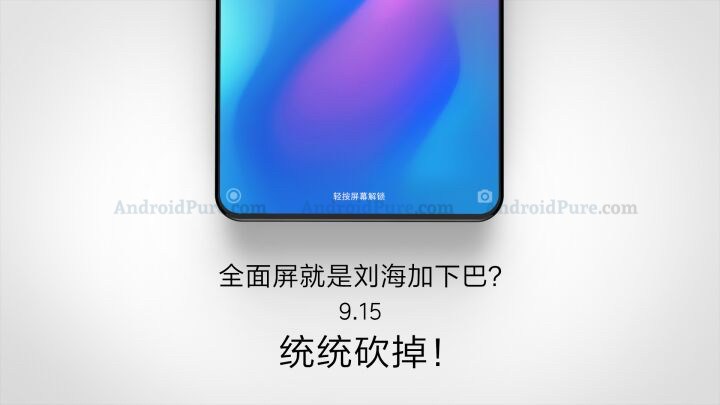 The teaser that you can see above makes two interesting suggestions for the Xiaomi Mi Mix 3. The first is about its launch date, which is listed as September 15th. Interestingly, some level-headed speculation suggests that Apple might launch the 2018 iPhone 9, iPhone X(s), and iPhone X(s) Plus on September 12th, so make of it what you must. What we're interested in is the second detail this image provides us.

The Mi Mix lineup is known for its unique front camera placement, as Xiaomi creates the illusion of a larger display by relegating the sensor to the bottom of the screen. The image above, on the other hand, deliberately chooses to show us the same part of a mythical device without any sensors or bezels. In fact, if the smartphone is the Mi Mix 3 rendered accurately, then Xiaomi just might pull off another Apple by making the device's chin as thin as humanly possible.

If it does, then expect the company to play a greater role in the smartphone discourse. Samsung's getting weak and the sharks are circling. Xiaomi is the manufacturer with the greatest potential to take advantage of the high-end market, despite Huawei surpassing Apple in overall smartphone sales. Dynamics are shifting folks, so stay tuned and let us know what you think in the comments section below.