Thermaltake has released a new addition to its TOUGHFAN series, alongside the recently released TOUGHFAN 14 is the TOUGHFAN 12 Turbo High Static Pressure Radiator Fan. This new fan now features a maximum speed of 2,500 RPM and uses Thermaltake's 2nd generation hydraulic bearing and metal reinforced hub. This new fan is available in a single fan pack with a listed price of $24.99.

The TOUGHFAN 12 Turbo High Static Fan is a PWM controlled high static pressure fan with a maximum speed of 2,500 RPM

The TOUGHFAN 12 Turbo High Static Pressure Radiator Fan features a standard design, having no RGB lighting throughout the fan but has grey fan blades. These fan blades are created using the liquid crystal polymer made fan blades, which substantially reduces the vibrations when the fan operated at the maximum speed. This fan also uses in-mold injection anti-vibration rubber pads, which further reduces the vibrations of the fan. This fan is designed with 80% coverage for all corners, which maintains lowered noise levels at max speeds. 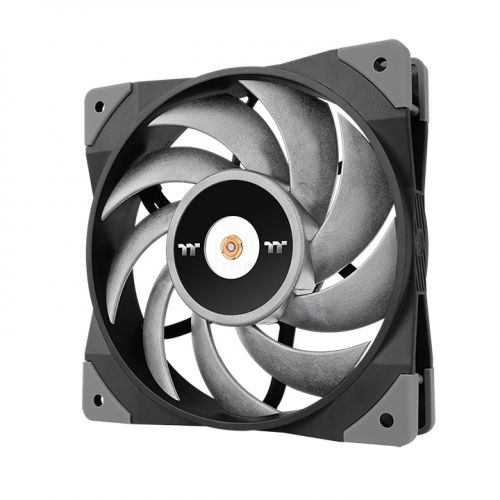 This fan uses Thermaltake's 2nd generation Hydraulic Bearing, which uses a brand new shaft design that features etches to persevere the lubricant. This preservation of lubricants allows for quieter operation and extending the lifespan of the fan. This fan follows the standard 120 mm size for PC case fans, which is perfect.

The TOUGHFAN 12 Turbo High Static Pressure Radiator Fan is designed to offer high air pressure and high airflow. This fan can create up to 72.60 CFM and features a speed range of 500 RPM to 2,500 RPM. Even at the maximum speed, this fan will generate just 28.1 dBA, which keeps the PC exceptionally quiet when compared.

The TOUGHFAN 12 Turbo High Static Pressure Radiator fan is currently available on Thermaltake's website. This fan only is listed as available in a single fan pack with an associated price of $24.99, this is in contrast to the original TOUGHFAN 12 fan, and TOUGHFAN 14 fan comes in up to two fan packs.