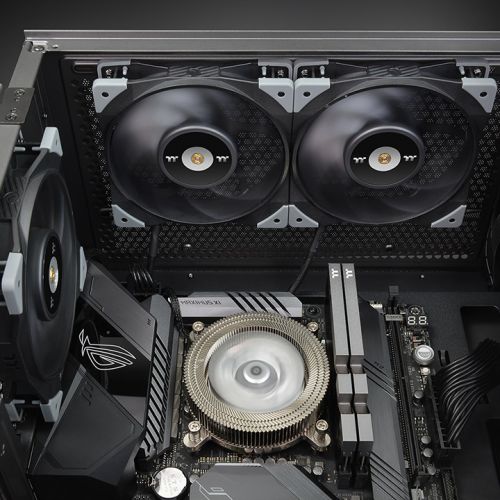 Thermaltake has announced that the TOUGHFAN 14 fan is available in either a single pack or a two-fan pack. This fan was originally built to be used with Thermaltake's AIO CPU coolers as they do not have a high speed of up to 2,000 RPM and offer a high static pressure. These fans are currently available through Thermaltake's website, with the two-pack having a price tag of $44.99 and the single pack featuring a price of $24.99.

Thermaltake announced that the TOUGHFAN 14 is now available on their website in either a single pack or a double pack.

The TOUGHFAN 14 is PWM controlled, allowing the motherboard to report the fan's speed and allow the user to adjust the fan curve if needed. The design of the TOUGHFAN 14 is a simple gray and black color scheme, with the anti-vibration pads being a light grey color and the fan blades being a black color scheme. These anti-vibration mounting pads allow for the higher speed not to correlate to this fan's more noise. This fan's design features the Thermaltake logo on the fan's hub; this fan offers no RGB lighting and instead focuses on offering the highest airflow possible.

The TOUGHFAN 14 uses a Metal-reinforced motor hub providing enhanced stability and further increasing the durability that this fan can offer. This fan utilizes a second-generation hydraulic bearing that uses a new design inside, etc., allowing for a much quieter operation. This is another feature that allows this fan to offer a longer lifespan.

This fan offers a maximum fan speed of 2,000 RPM, which allows for a high amount of airflow. This fan utilizes a unique fan blade that features tensile strands and low thermal expansion coefficient materials. The fan blades utilized in this fan are built using a special liquid crystal polymer (LCP), which minimizes the higher fan speed vibrations. This fan can offer a maximum static pressure of 41 mm H20 with a maximum airflow of 58.35 CFM.