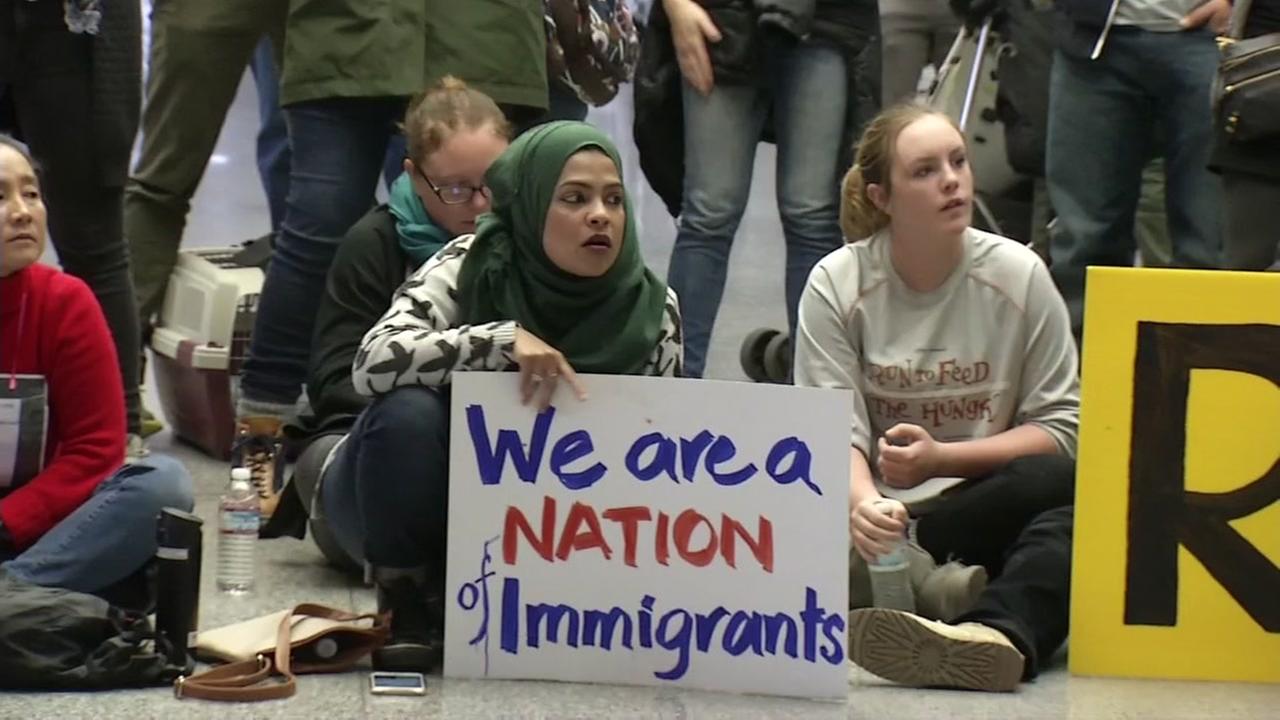 Ashton Kutcher isn't the only one protesting against Friday's executive order - widely known as the Muslim ban. Several celebrities, tech companies, and executives in Silicon Valley have come out in opposition of what's being called an immigration ban. Multiple tech luminaries are resisting the ban, and offering to donate to the American Civil Liberties Union (ACLU) following the enactment of the immigration order.

The executive order was signed on Friday by President Donald Trump, banning entry for 90 days to refugees and visa holders from seven countries - Iran, Iraq, Libya, Somalia, Sudan, Syria, and Yemen. Since the order was signed, thousands of visitors, students, and green card holders have been stopped from traveling to the country, sparking nationwide protests and sit-ins at major airports. The ban on green card holders has now been relaxed.

Along with these protests, major tech firms - who probably have more depending on the immigrants around the globe than any other industry - have spoken out against the ban, its negative impacts on businesses and the economy, and have also offered to donate to the ACLU after the organization sued over President Trump’s executive order on immigration. The donations are six times what the ACLU normally receives in one year in online donations.

Here’s how tech companies are reacting to the immigration ban.

One of the strongest reactions came from Google. In an internal memo, CEO Sundar Pichai said it is "painful to see the personal cost of this executive order on our colleagues". Google co-founder Sergey Brin was also spotted at the march at San Francisco International Airport.

Earlier, Google had ordered its affected staff back to the United States. Pichai said that the company is "concerned about the impact of this order and any proposals that could impose restrictions on Googlers and their families, or that create barriers to bringing great talent to the U.S."

"It’s painful to see the personal cost of this executive order on our colleagues. We’ve always made our view on immigration issues known publicly and will continue to do so."

The company has also created a $2 million crisis fund that can be matched by up to $2 million in donations from employees. The fund will go to four campaigning organizations – the American Civil Liberties Union, Immigrant Legal Resource Center, International Rescue Committee and UNHCR. This is the company's largest humanitarian campaign ever.

Uber has created a $3m defense fund to cover legal and immigration issues for its staff impacted by Friday's executive order. The fund will help cover legal, immigration and translation costs for drivers affected by the travel ban. Founder Travis Kalanick (a member of Trump's Policy Forum) said the "ban will impact many innocent people - an issue that I will raise this coming Friday when I go to Washington for President Trump’s first business advisory group meeting".

The company had faced strong backlash when it promoted disabling surge pricing near John F. Kennedy International Airport during a taxi strike over the weekend. Kalanick apologized for the "confusion" and also announced donating $3 million to set up a legal defense fund for affected drivers. But, many see this donation as a late response to the executive order, prompting a #deleteuber Twitter campaign.

There are no reports yet if Apple is funding to campaign against the executive order. However, the company CEO Tim Cook sent an email to his staff, saying that it is "not a policy we support".

In my conversations with officials here in Washington this week, I’ve made it clear that Apple believes deeply in the importance of immigration - both to our company and to our nation’s future. Apple would not exist without immigration, let alone thrive and innovate the way we do.

Lyft is one of the few tech companies who were the first to criticize the immigration ban. Along with pledging to donate $1 million over the next four years to the ACLU, the company gave the following statement:

Throughout our history, Lyft has worked hard to create an inclusive, diverse and conscientious community where all of our drivers and passengers feel welcome and respected. Banning people of a particular religion from entering the U.S. is antithetical to both Lyft's and our nation's core values.

We ask that you continue to be there for each other - and together, continue proving the power of community.

Netflix CEO Reed Hastings strongly slammed the order, saying that President "Trump’s actions are so un-American it pains us all."

Trump's actions are hurting Netflix employees around the world, and are so un-American it pains us all. Worse, these actions will make America less safe (through hatred and loss of allies) rather than more safe.

A very sad week, and more to come with the lives of over 600,000 Dreamers here in a America under imminent threat. It is time to link arms together to protect American values of freedom and opportunity.

Slack CEO Stewart Butterfield posted several tweets criticizing the ban. "My grandfather came from Poland between the wars, at 17, sponsored by an elder sister. Two more siblings made it. Everyone else died."

"And he's just getting started." • It's still so hard to believe that this is real life. Nearly every action seems gratuitously … evil. https://t.co/ZcpdeUnlYf

Elon Musk - who recently joined President Trump's policy group and Manufacturing Jobs Initiative - said last week that people should stop attacking Trump because it achieves nothing. But, he responded to the immigration ban, saying the "blanket entry ban on citizens from certain primarily Muslim countries is not the best way to address the country’s challenges".

"Many people negatively affected by this policy are strong supporters of the US,” Musk tweeted. "They've done right, not wrong & don't deserve to be rejected." He also asked his followers to send amendments to him. "Will seek advisory council consensus & present to President."

Airbnb - free housing to "anyone not allowed in the USA"

Unlike other tech companies, the executive order goes directly against the core mission of Airbnb - anyone can belong anywhere. CEO Brian Chesky condemned the immigration ban and went one step further by offering free housing to "anyone not allowed in the USA".

Airbnb is using its existing disaster response program. This program asks Airbnb hosts to offer housing to people displaced by natural disasters or to aid relief workers. The company has also matched up to $1 million in donations to the UN Refugee Agency.

Our focus is on providing housing to people who have been negatively impacted by President Trump’s executive order, particularly people who were traveling to the U.S. and are now stranded.

We are responding to requests from individuals who have reached out to us directly and we are also working with relief organizations to further identify people in need of temporary housing due to the travel ban.

Unlike other major tech companies and executives, Microsoft didn't strongly oppose what's being called as "Trump’s most controversial act yet," saying that the company shares the concerns of those affected. Satya Nadella said that the company "will continue to advocate on this important topic".

"We share the concerns about the impact of the executive order on our employees from the listed countries, all of whom have been in the United States lawfully, and we’re actively working with them to provide legal advice and assistance."

A major government contractor, Microsoft's tone became a little more critical later on. The company spokesperson said the move is "misguided and a fundamental step backwards".

There are more effective ways to protect public safety without creating so much collateral damage to the country’s reputation and values.

The company is providing support to affected employees. In a blog post, it said that all of its employees are in the country "legally," noting that Intel was co-founded by an immigrant.

When we close our hearts & stop loving other people as ourselves (MK 12:31) we forget who we truly are---a light unto the nations. #noban

My great grandparents came from Germany, Austria and Poland. Priscilla's parents were refugees from China and Vietnam. The United States is a nation of immigrants, and we should be proud of that.

Like many of you, I'm concerned about the impact of the recent executive orders signed by President Trump.

That said, I was glad to hear President Trump say he's going to "work something out" for Dreamers -- immigrants who were brought to this country at a young age by their parents. Right now, 750,000 Dreamers benefit from the Deferred Action for Childhood Arrivals (DACA) program that allows them to live and work legally in the US. I hope the President and his team keep these protections in place, and over the next few weeks I'll be working with our team at FWD.us to find ways we can help.

The Executive Order's humanitarian and economic impact is real and upsetting. We benefit from what refugees and immigrants bring to the U.S. https://t.co/HdwVGzIECt

Tony Fadell, the founder of Nest, has pledged to donate to the ACLU:

Triple your donation. Send your receipts to me too. I'll match to $25k. Thanks @sacca for taking the lead! https://t.co/B6TMltL2OB

Chris Sacca is an early Twitter investor who initiated the trend of offering to match donations to those who will respond with receipts.

Along with official responses from companies and CEOs, several other tech executives, including Silicon Valley investors, have pledged to donate to match ACLU donations amid immigration ban protests.