Samsung's Android 10 rollout has been better than anything than the company has done until now. This was the first year when three flagships got a stable Android upgrade in the same year it was released. Even Samsung's own Android 10 roadmap predicted that the stable update would start rolling out in January for the Galaxy S10 and Note 10 series. To make things better, even last year's Galaxy Note 9 got its update nearly two months before its schedule. The only flagship that is yet to receive Android 10 is the Galaxy S9, and that'll get the upgrade in February, according to Samsung's new Android roadmap. 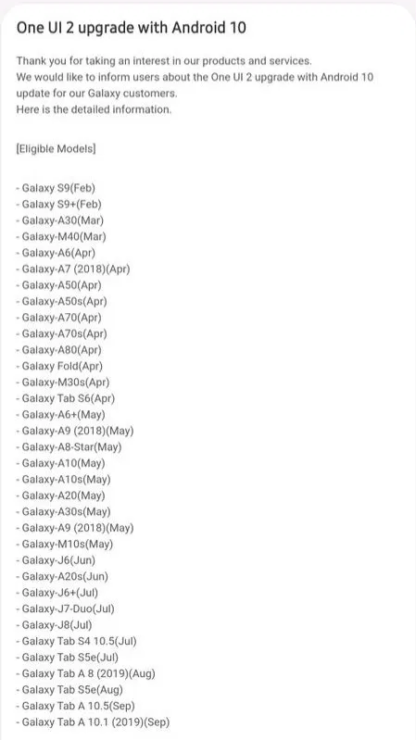 Samsung appears to have moved a few things around in its updated roadmap (via Sammobile). The older one, for some reason, stated that the Galaxy S10 and Note 10 series would get Android 10 alongside the Galaxy S9 and Note 9 series. This has never been the case as the company always pushes software upgrades to newer devices first.

Even some Galaxy A and M series devices have been moved around a little. For example, the Galaxy M30s will now get Android 10 in April instead of February. The Galaxy A30, on the other, will get its update a month earlier in March instead of April. Everything else on the list appears to be the same. It would be great if the Galaxy S8 was on the list too, but the chances of it receiving One UI 2.0 are grim, despite promises made by Samsung support representative that says otherwise.

Ideally, the Galaxy S9 should have received its Android 10 update by now, considering that the device has had an open beta program ongoing for well over two months. Furthermore, users who have participated in the beta haven't received an update for a long time, which makes us wonder about what is going on behind the scenes. A delayed update isn't necessarily a bad thing, though. We've seen that rushed updates can wreak havoc with the OnePlus 6 series' infamous Android 10 build.