Last week we saw some photos claiming to be the power and volume flex cables of the upcoming iPhone 6. A new image adds a bit more to the image with SIM card trays giving the hints to possible color options that Apple is planning for the 8th gen iPhone. The flex cable parts shown in today's image although match the ideology of a having both mute and volume keys on a similar flex cable with larger separation, are a bit different in layout.

This new report today comes from Letem Syetem Applem that indicates that Apple may be planning to launch iPhone 6 in three colors: Space Gray, Gold, and Silver. While the parts are not identical to earlier report showing flex cables of iPhone 6 components, it does purport a similar overall concept. Like the previous set of images, today's also shows the volume flex cable containing both the mute and volume buttons with a possible larger space between the two components. The power flex cable shows the same arrangement but suggests a larger sized power button.

It is definitely hard to confirm the authenticity of the iPhone 6 components' images even though they have all the Apple logos and digits. From both these components' images and different leaked shots of iPhone 6, it appears that iPhone 6 will have a redesigned button layout with oval shaped volume keys and a side positioned power button. As mentioned previously, this side positions power key is designed to help in using the iPhone one-handedly considering the larger size of the smartphone. 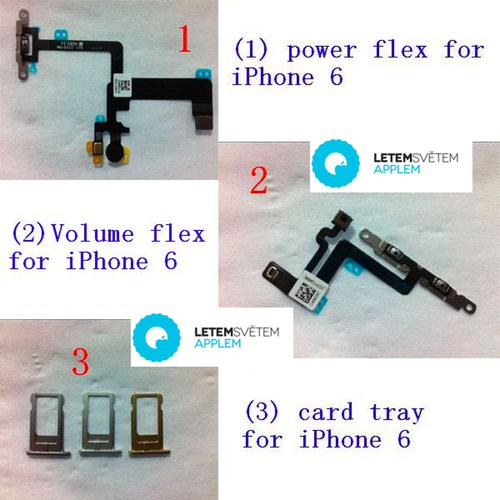 This new image also confirm that Apple will be keeping the same color options with next gen iPhone too as it would be available in space gray, gold and silver just like iPhone 5s.