Apple has released the iOS 8 for public as it had promised on the Keynote morning. And yes, it's a huge 1.1 GB update! While iOS 8 isn't trying to represent a huge leap in the design department as its predecessor iOS 7 did, it surely is bringing a truckload of features and modifications building on to the base of iOS 7 and improving the user experience. With an aim to have a coherent and unified ecosystem throughout Apple products, iOS 8 integrates more beautifully and tightly with Mac and iCloud. iOS 8 brings in some huge upgrades in the shape of interactive notifications, widgets, third-party keyboards, modified multitasking interface, improved Mail, Messages, and Camera apps among other various changes and features. 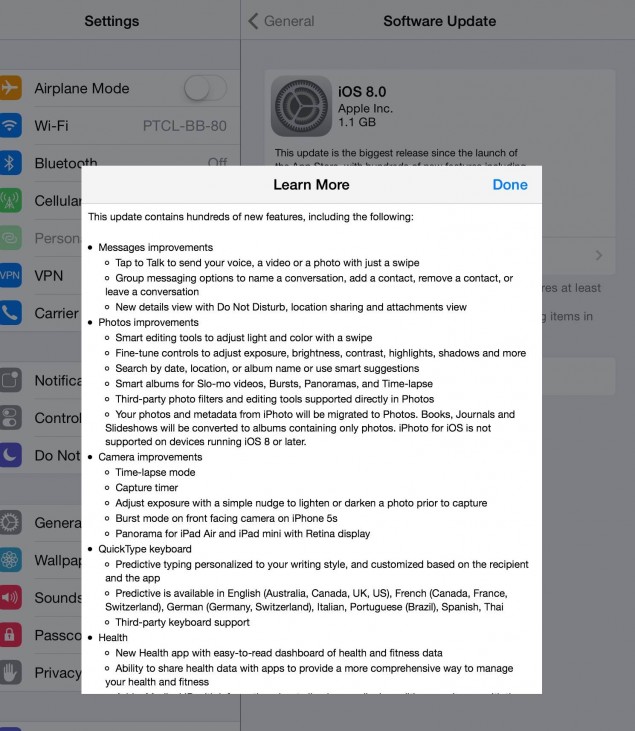 - Download latest iOS 8 wallpapers, if you aren't ready for an instant upgrade.

Apple announced its latest mobile OS iteration at WWDC which was followed by a number of beta versions intended for developers and testers. The list of beta builds was packed with a beautiful and final version in the shape of an iOS 8 Golden Master released on September 9. Here are the iOS 8 compatible devices to make sure your device can be upgraded to the latest OS:

Latest iOS 8 not only brings a number of improvements in the apps and an increased unification of both the OS X and iOS but also offers new features. With iOS 8, Cupertino has built frameworks to support home automation, health and fitness, in-car entertainment and navigation, and interoperability features making the OS able to integrate with Internet of Things including the vehicles and wearables.

For many users, it would be the improved apps including Camera, Messages, and Mail that would take the most attention. However, we cannot disregard a ton of under-the-hood improvements impacting performance, and features that could help us in better integration with other gadgets.

Saurik Releases AFC2 For iOS 8 And iOS 8.1 For Full File Access Through USB

iOS 8.1 Tutorial And Download Links For iPhone iPad And iPod