Apple has just released iOS 8.1.1 for download on all devices compatible with the original iOS 8 released earlier this year. Compared to iOS 8, iOS 8.1.1 received minor attention and was not the focus of any major news. Apple only released one beta version for testing to developers with bug fixes two weeks back, which left much to speculation about the software update's expected release date. 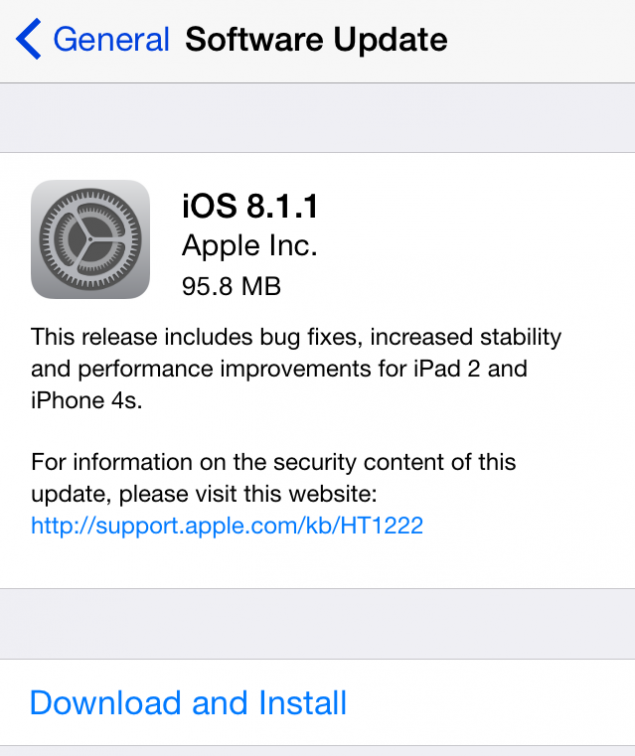 iOS 8.1.1 Released Over The Air - Download And Install Today.

Given the limited focus paid towards iOS 8.1.1, its no surprise that the update doesn't address many features or bugs according to headlines. iOS 8.1.1 beta seeded to developers included several changes related to healthkit, which suggest that iOS 8.1.1 released today will also focus around Apple's health app. HealtKit also cause problems with the release of the original iOS 8 earlier this year, with Cupertino being forced to roll out further updates to make the app function smoothly.

Display of blood glucose data had been disabled in HealthKit due to compatibility reasons. Apple allegedly wants to add compatibility with displaying information in metrics or mmol/L. iOS 8 also continued to suffer more problems in the form of wireless connectivity and Touch ID being disabled in iPhones with Apple having to patch the issue with a quick update in the form of iOS 8.0.2.

iOS 8.1.1 is designed primarily towards performance improvements in legacy devices including the iPad 2 and the iPhone 4S. The iPhone 4S was particularly notorious for slow performance when users installed iOS 8 on it, with several complaints surfacing. Apple was however expected to fix the issue with further updates and this seems to be the case with iOS 8.1.1. so for all the iPad 2 and iPhone 4S users out their, upgrade to iOS 8.1.1 and let us know if you see any improvements. We'll keep you updated about any fixes and solutions.