Where are the AR/VR Unicorns?

That’s a question that Wccftech asked in August: if you take a look at the number of unicorns – a start-up with a valuation of over $1 billion – there is a suspicious absence of AR/VR companies. According to CB Insights Global Unicorn Club, only two of the nearly 345 companies it tracks fit the bill as unicorns. At the time we concluded that there was too much of a capability gap between expectations and reality for VR for it to take off as the press/analyst hype machine anticipated; AR is a slow growth technology that needed too much capital for it to properly take off (with a few exceptions) before the market found it too boring to bother with.

But the Glimpse Group’s CEO Lyron Bentovim would beg to differ. Glimpse Group is a unique startup incubator in New York City that purchases early-stage AR/VR startups, capitalizes them, helps with administration, and gives them space to work to mature their product before approaching outside investors. Investors can also invest in the Glimpse Group itself to get exposure to its portfolio of startups. While the startups under its roof are all in the AR/VR segment, they are targeting a plethora of sectors for their respective use cases.

Bentovim is a big believer in the AR/VR market, but also has his share of criticisms for some companies that are part of the problem in widening this expectations-capability gap.

In your experience how has the market perception of AR and VR changed during the last four to six years?

First of all, if you look at the kind of the tech cycle we're all in, it’s still in its infancy. Tech cycles can be up to 30 or 35 years, and the first years are the years where people just begin to understand what is happening. So, when I’m comparing AR and VR they are in the same cycle and I’ll talk about each one of them.

In terms of VR and when we started out in 2016, the real headsets began, and when we were meeting with companies, it was always ‘Well I've never seen this before’. People are blown away by this, but they have no real plans for using it. And it was very hard to use because of the fact that it has to be connected to a stationary PC with a high-powered GPU. So, it's very hard to sell it to the market.

When the Oculus GO came out it was a good teaser, then the Oculus Quest was really a game-changer. It’s significantly easier to get this into organizations, and also organizations are now understanding the benefits of VR across a variety of use cases.

[In Enterprise] There is definitely a lot of willingness and openness today which means it’s a lot easier to get VR into an organization than it was 2-3 years ago, where they have no idea what you're talking about and they have to come see just to kind of really understand what you're meaning.

With that in mind, does this mean that the future of VR is more enterprise-based instead of consumer/gaming?

Yes, and Glimpse is an enterprise-only organization.  But this means it could be hospitals, could be universities, could the governments, could be banks or manufacturing companies. All have a use for VR.

Gaming is a very limited world, and they are doing their thing. We're looking at introducing this to change the world on the business side.

We’re growing at 300% this year. Businesses are opening doors and building bridges, but it’s still just kind of the beginning of sticking your foot in the door.

The big question would be: how do you spot the next AR/VR unicorn? If you look at the list of unicorns currently on the market so many are focused on sectors like retail or FinTech – these days AR/VR is a huge missing part of the unicorn ecosystem.

To have a unicorn you need to have an established market. I think we're three-to-seven years away [from seeing more]. Of course, that depends on how you look at it and how things turn out. Glimpse Group is gaming to be one of those unicorns.

But that’s not going to happen right now. To get there you have to have be an established brand working with a lot of consumers or businesses. Right now, that doesn’t exist because the market is not there yet. It will get there – and there will be multiple unicorns. But if you look at it the Internet in the early days there weren't unicorns until kind of you got mass adoption. So, look at the Internet in the early 90s there weren't any unicorns. The unicorns came in the late 90s, first with Amazon and Yahoo and then, eventually, over time Google and Facebook added to that as the field diversified itself.

It’s too early to have unicorns in this space because the market can’t justify it. The only one that exists right now is Magic Leap – and it’s a fake unicorn for a variety of reasons.

I was initially very supportive of their product. It’s not much better than the HoloLens, and I think the HoloLens 2 is even better. I’m disappointed in what Magic Leap did, and I’m shocked that they raised that kind of money. But hardware is a hard game to play. 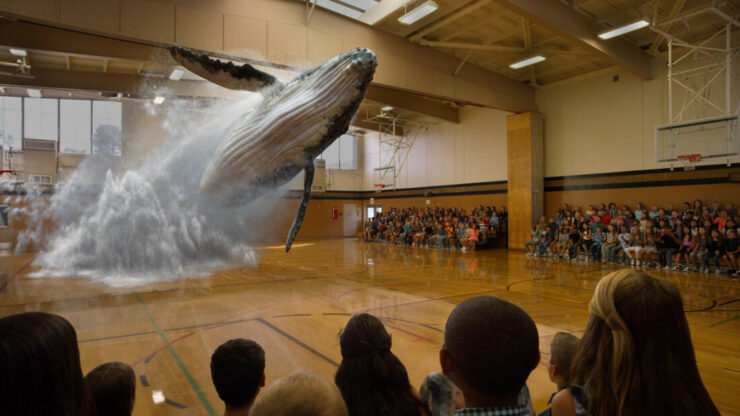 Their positioning in the market place is definitely not representative of their size. We had one headset and it's basically accumulating dust. Nobody cares about it. None of our customers really wants to do development for it; none of our developers are even in to taking it home for the weekend or messing around with it. And we've got 50 people that are really into AR and VR and they are constantly playing around with all the toys we have here.

Magic Leap has raised billions, yet their end result is a product that’s worse than the HoloLens. Considering this – and the impact on the capital markets -- do you think there's still a market for new hardware but at a much lower cost, with a much lower fundraise?

Yes -- and you need to have a better experience. The challenge with [Magic Leap] is obviously the price tag [they start at $2,295 and go up to $3,290 for a dev kit] and it’s unrealistic to get any market share with that. The other is the experience.

The field of view is the next big challenge. It actually hurts immersion. They can make all the fake videos they want, but the augmentation isn’t there. It doesn’t give you an immersive experience and it actually messes with your head – I can have something in front of me, but if I look to the side it’s no longer there, even though I know it’s there if I look ahead at it.

If you contrast the experience of actually using a Magic Leap to the expectations one might have after watching one of their fake videos, there’s a huge capability gap. I’d have to think that this hurts the industry.

Yes, and there’s a lot of other things that hurt the industry. Like, for instance, the TV ads for Gear VR by Samsung. Many people bought their product because it was free or very cheap and then used it, and were very disappointed that it didn't look anything like that TV commercial. For them, the TV commercial is what they think VR is.

So that was the first killer. And then on the augmented reality side, Magic Leap and HoloLens are doing the same. Once people put them on they are pretty disappointed. I had high expectations -- especially when they are hyping before you even saw MagicLeap’s product. And we were one of the first to get one. And when we got it, we put it on. Everyone was lining up here at our office’s conference room – everyone wanted to see and use it – but after that everyone just moved on with their life. Everyone was like, ‘Ok, got it, not too exciting’.

Personally, I prefer to have AR through my phone rather than Magic Leap at this point.

Isn’t this all going to make it harder for the next fundraise? Think about how much the capital markets have put in. I’m not going to say Magic Leap flopped, but they aren’t going to live up to expectations…

I have no problem saying that they flopped.

But the good news is, the big guys don’t need to fundraise are fully committed to building the world.

They are pushing forward. The question is, can someone make the case for an independent hardware company to come in? And hardware is a very hard game to play at this early cycle in the market. You’re most likely to fail. I’d rather have the big guys play. I’d never start a hardware company in the VR space. It’s a big mistake.

Even I even if I believe strongly that this is going to be ubiquitous and everyone will have a VR headset and AR glasses ten years from now, I would not start a VR hardware company even if someone funded me right now.

With hardware, if you miss a cycle you lose tons of money. Facebook is committed, they see it as the future. Mark Zuckerburg is committed to winning that game on the hardware side. For him to throw a billion dollars at a project it’s nothing. He bought WhatsApp for $20 billion, and I’m still not sure why he did that.

Things will continue to evolve. The headsets will continue to improve. Similar to what we saw with phones starting with the Motorola brick phone and ending up with kind of their early iPhones, and then evolving to the current generation of iPhones and Samsung (KRX:005930) phones.

So you can see that curve and more and more features and capabilities come in and you will see that in VR headsets. I believe that we will have AR glasses that actually function three years from now, and they will be getting traction quicker than VR.

And I think 5G is going to be a major driver because the network is part of the driver, 5G is going to be a major part of enabling AR. Let’s say you have AR glasses now and went outside. And let’s say that these glasses’ software augmented the world around you (which my companies have the capability of doing now). If you’re walking around with LTE – forget about something less – your experience will be bad because your glasses won’t be able to download the experience fast enough as your walking.

As for Glimpse, our goal is to go public and some point and have many of our companies exit and become independent players in their own spaces in AR and VR as this industry grows.

This interview has been condensed and edited for clarity.