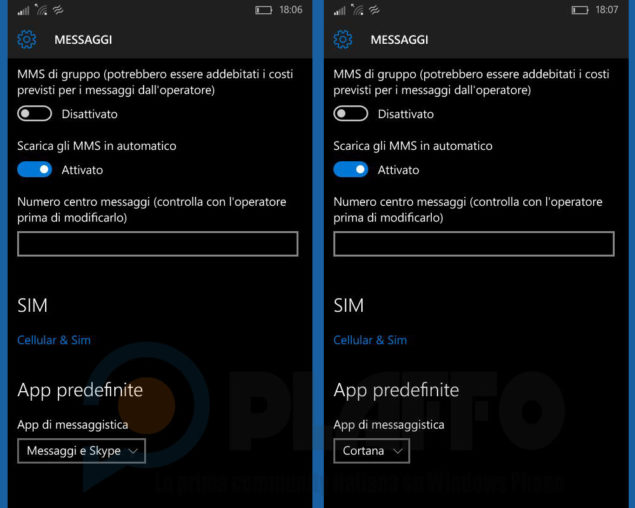 The upcoming Windows 10 Mobile 14288 will introduce the ability to set Cortana as the default SMS client, a leaked screenshot has revealed. Microsoft has been trying to improve Cortana in its efforts of making it more "personal" and useful to both the Windows 10 PC and Windows 10 Mobile users. Giving it more capabilities, the company is now adding a new functionality that would allow users to set Cortana as their default SMS app.

Giving more power to Cortana, Microsoft is trying to help users perform tasks without having to touch their devices. While the latest update appears to give full control to Cortana over messages on Windows 10 Mobile, this is not the first implementation of Cortana in the Messaging app. Cortana already has access to messages on the mobile operating system. Microsoft is now going for a deeper implementation, but it is not clear how this is going to work exactly.

The source has said that while they can see the ability to set Cortana as the default SMS client, the feature doesn't really work. They also said that during testing they were able to receive a text message, but still had to use Messaging + Skype app to read it. The feature is reportedly coming from an internal build and might be available to Windows Insiders in a future preview build.

Microsoft is working to improve its personal digital assistant providing better synchronization between Windows 10 PC and Windows 10 Mobile. Earlier reports had revealed that users will soon be able to view app and call notifications right on their Windows 10 computers. Working similar to how OS X and iOS interact with each other, the functionality is still under development.

- How to Lock Your Windows 10 Mobile Devices Remotely