Its only two days till we get to take an official look at this year's Nexus offerings from Google's end. The software giant has decided to take things to a new level this year, with two Nexus devices expected to be in the mix, one from LG and one from Huawei. We've seen plenty of leaks, rumors and speculation surrounding the pair over the past couple of months, and today you can add a complete specifications outing of the Huawei Nexus 6P - as its being called right now. So take a look below to find out what to expect from Huawei and Google this year. 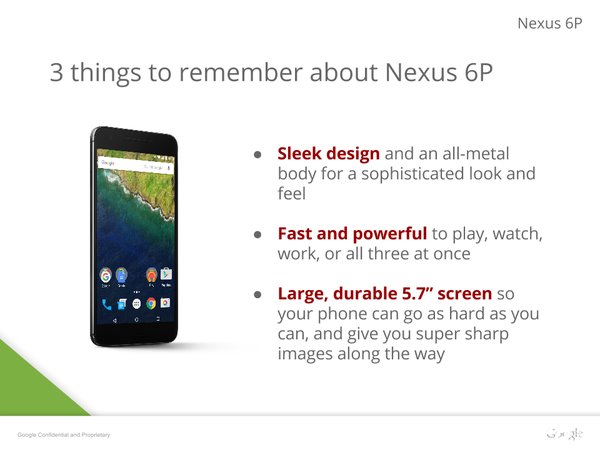 As we've told you countless times before, when it comes to the leaks and rumor mill, devices often get leaked complete before their official launches. We've seen this trend apply for quite a few flagships out there, with Samsung's Galaxy S6 and S6 Edge, Apple iPhone 6s and the iPhone 6, HTC's One M9 and others as well. Today its the Nexus 6P's turn, as some very official looking Google slides have surfaced which include everything that you'd want to know about the device.

Since Nexus devices from Google's end are all about debuting new versions of pure, unadulterated Android, today's slides showcase some features of Android Marshmallow that should be coming with the Nexus 6P. These include support for fingerprint authentication, battery savings and improved app permissions to name a few. 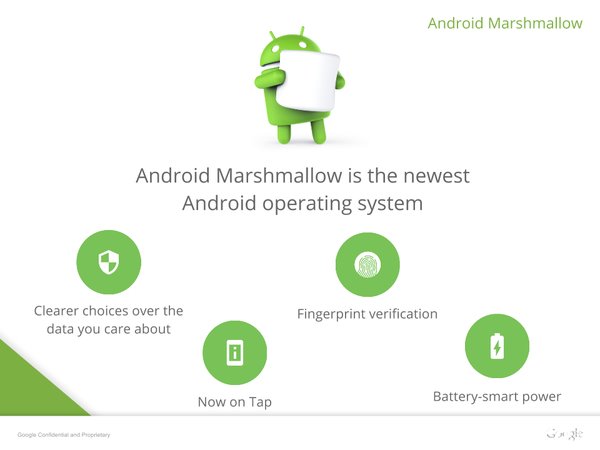 In addition to details about Android Marshmallow, today's slides also include instructions for reviewers and presenters. We're more interested in the slides showing the device's specifications however, since the Huawei Nexus 6P has been in the news for quite a while and will be the first Nexus device to be manufactured by the Chinese smartphone upstart. Huawei's moving up in the world it seems, and the Nexus 6P does come with some good looking specifications indeed.

Looks like all those images and render leaks were on point since the Nexus 6P appears to be identical to what we've been showing you in the past as well. Fingerprint recognition is confirmed on the device, but we're concerned when it comes to the processor side of things. The Nexus 6P will be powered by v2.1 of the ill-fated Qualcomm Snapdragon 810, so here's to hoping the Chinese maker has figured out a way to eliminate throttling from the equation, like Sony managed to do so earlier this year. 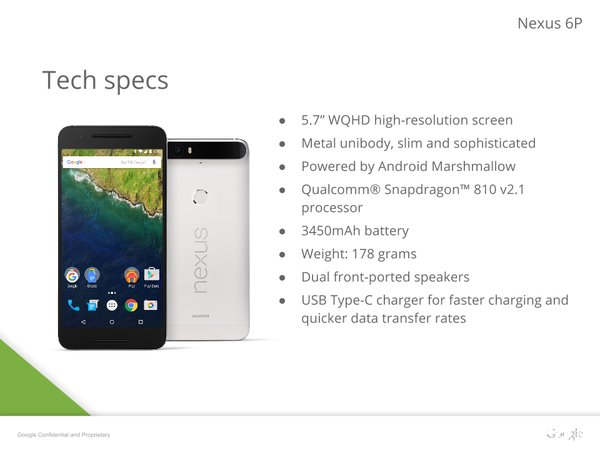 Aside from the Snapdragon 810, the Nexus 6P will be coming with a 5.7 inch, 1440 x 2560 screen. The battery for the device stands at 3450 mAh, which looks to be just enough for a device with such specifications. Since Google's also claiming that Android Marshmallow will favor battery performance quite a lot, with features such as Doze and App Standby, we'd be interested to see how all of this translates into real life performance.

USB Type-C should also be expected to make an appearance on the device, with all those super-fast data transfer speeds promised by it. On the camera side of things, we don't see an official resolution number, but according to today's slides, the Nexus 6P will allow more light through its camera sensor, which combined with Google's new camera app for Android should improve photography on the device. 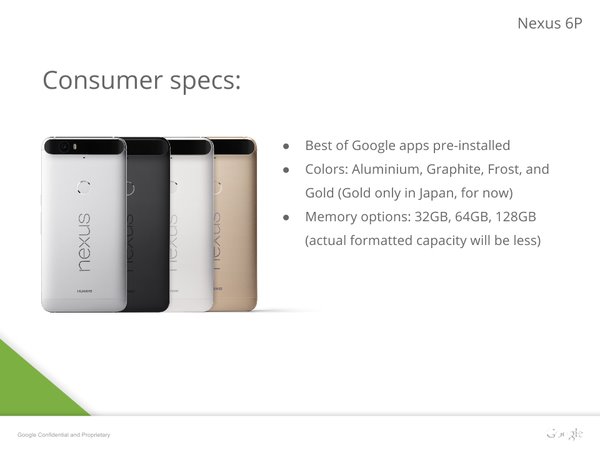 Storage specifications for the device will be 32, 64 and 128 GB, so we're guessing there isn't going to be any expandable storage in the form of MicroSD on the device this time around. Since the Nexus 6P is also labelled as being the first all-metal Nexus device, the stars really aren't in Micro SD's favor as of now. The device will also be available in four color options, Aluminum, Graphite, Frost and Gold - with Gold being a Japanese exclusive as of now.

With today's information, the Google/Huawei Nexus 6P does sound to be a reasonable device for anyone looking for a pure Android experience coupled with some decent specifications as well. Other details, such as RAM, camera resolution and more are still under the wraps so we're going to have to wait for the device's official unveiling for them. So take a look at the remainder of the slides below, let us know what you think in the comments section below and stay tuned for the latest.