Samsung definitely re-designed its Galaxy S flagship line keeping the consumer demands right on the design floor. It is quite evident from the number of pre-orders, early profit returns, and industry analysis that Samsung has finally started to make some huge profits from its mobile department like the days of yore. Which brings us to what makes these two Samsung Galaxy S6 and the S6 edge smartphones different, beautiful and attractive to consumers. 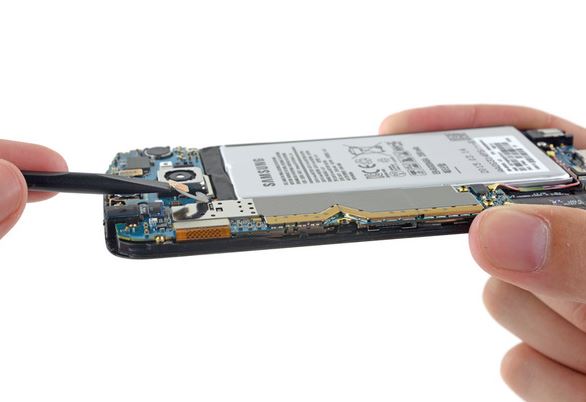 We have already shared with you quite a many details and reviews of the dual-curved smartphone. However, the regular sibling of the Galaxy S6 edge is unfortunately not getting the same love and attention as much as it deserves. Here is a Galaxy S6 teardown done by the expert folks at iFixit sharing some informative commentary and, as always, awesome pictures of the device's innards.

Here are the Samsung Galaxy S6 teardown highlights as shared by iFixit:

So, while the entire world seems to be pleased with the latest Samsung Galaxy S6 duo, folks at iFixit evidently hate it thanks to a very odd design making repairing a tough task. Samsung Galaxy S6 managed to get an average 4 out of 10 in the repairability score. Which, by the way, is higher than what the edge managed to get so something for the regular S6 to be happy about.