Reports are pouring in about a new device from HTC called HTC Eye also known as HTC Desire Eye. The Eye part is possibly given to the smartphone due to its camera feature. HTC Eye is eager to become the first ever smartphone which will sport two 13-megapixel cameras. Yep, both the primary and the front camera sensors will be equally competent to give out the best selfie phone one can ask for!

While the details are a little obscure about the upcoming HTC phone, initial rumors have detailed some bits about the HTC Eye expected specs. If rumors are to be believed, the selfie phone will be a 5.2-inch Full HD smartphone powered by a Snapdragon 801. Now, as you can see that these specs are quite high-end normally expected from the flagship. HTC has usually kept the Desire lineup pretty much in the mid range. Here are the complete specs shared by @upleaks:

However, it is not the high-end specs that are eye-catching in this Eye, it is the presence of two mega camera sensors in the phone. According to the sources, HTC Eye will sport two 13-megapixel camera. The front camera will sport a dual LED flash just like the primary shooter. The front will also get wide aperture of f 2.0 lens making it a perfect device for selfiegraphy. It rarely happens that we hear about odd things happening with mainstream devices, but perhaps the ongoing selfie craze justifies a little oddness from the manufacturers. 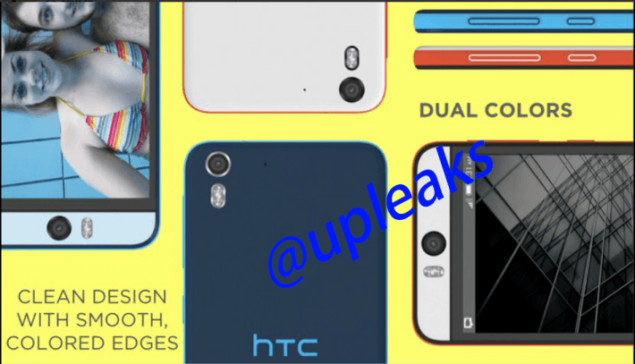 Upleaks has also shared the images of the device which shows quite a simple Desire-sort of look with plastic build. HTC Eye will be offered in two colors and is expected to be launched on October 8 at the HTC Double Exposure event. Does the thought of having two 13-megapixel cameras tingle you a bit? Well, it would certainly make the selfie-lovers happy.