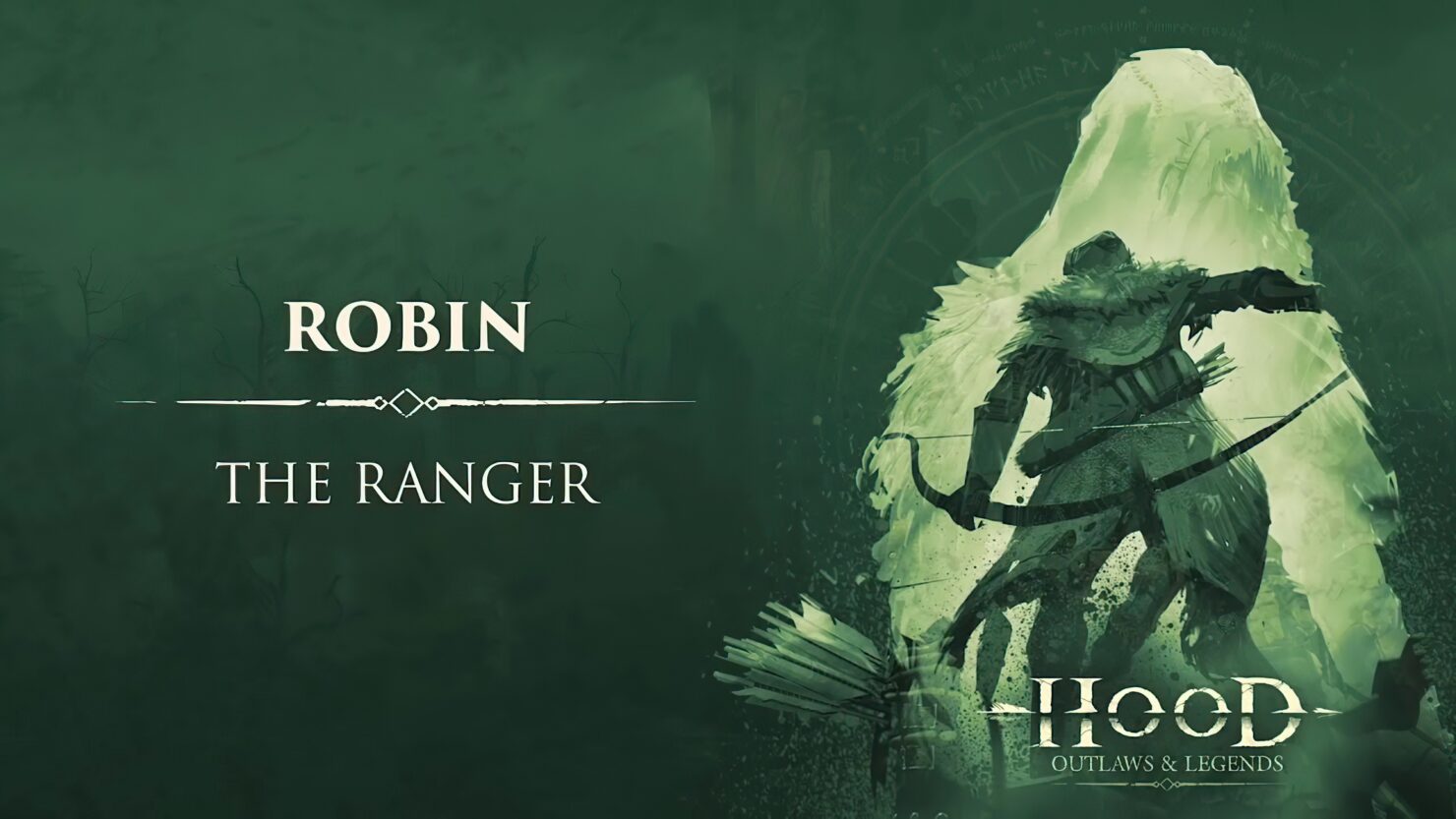 Robin Hood is probably one of the most famous legends to come out of the British Isles. He’s a man with a bow that steals from the rich and gives to the poor. Often this legend has been wholesome and unbloody for the sake of the children, but we all know that bow isn’t exactly non-lethal.

But while you might be ready to jump into the action is the titular daring rogue in Hood: Outlaws and Legends, it can be tricky to learn your place in the team, your position on the map, and your best methods for stealing the chest. This guide will walk you through everything you need to know to be the Ranger, Robin Hood.

Other Hood: Outlaws and Legends guides: Beginner's Tips and Tricks, Marianne the Hunter, John the Brawler, Tooke the Mystic

Pulling On Bowstrings And Heartstrings Alike 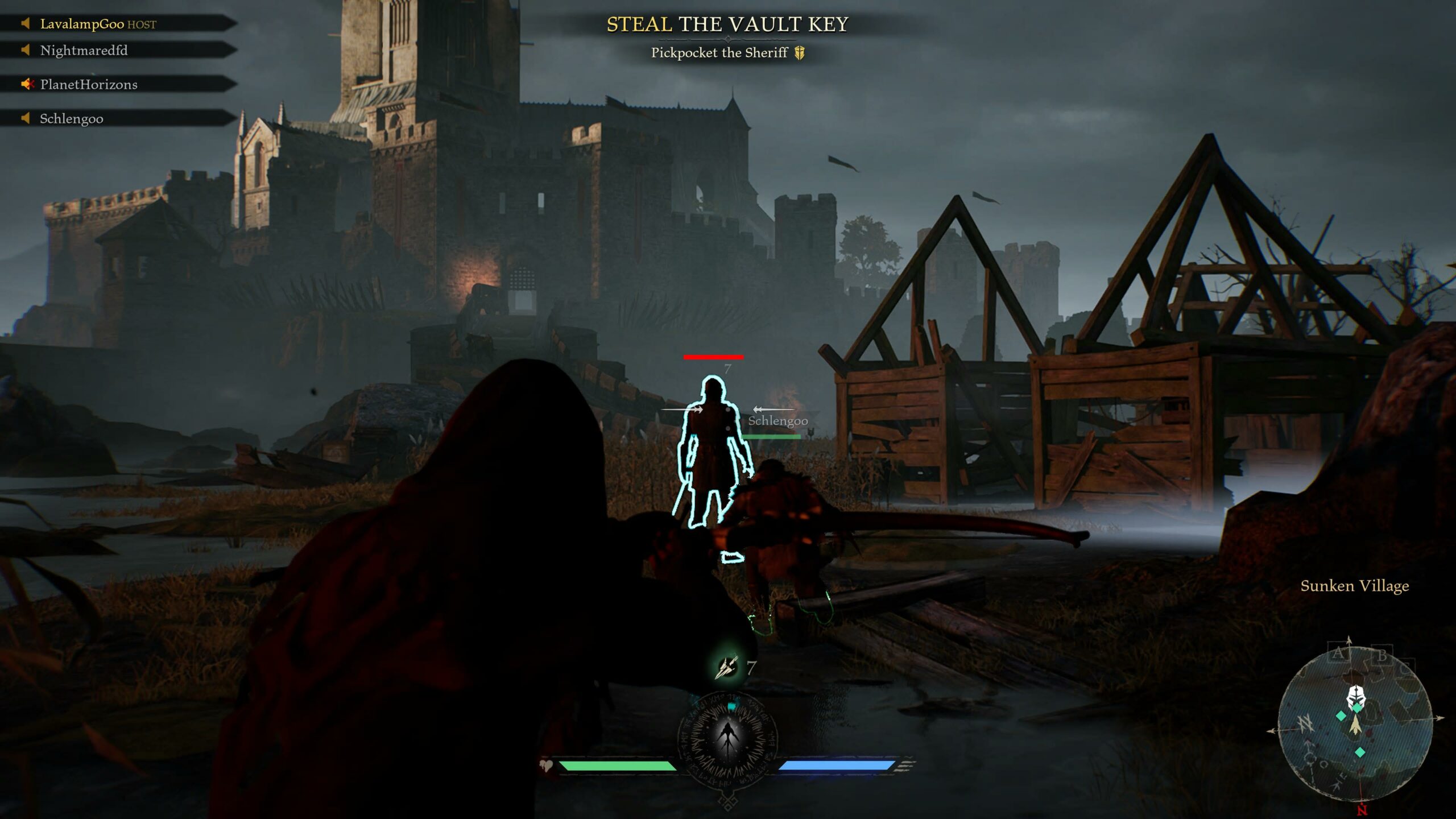 Most games that include bows have some kind of drawback mechanic that increases range and damage the longer you have the arrow notched, and Hood: Outlaws and Legends is no different. But while the other games often have a fairly generous damage curve, Hood is quite the opposite. If your bow is not pulled all the way back, the arrow you fire is quite useless without an ally to support you.

A fully drawn headshot is fatal for players and state guards alike. Anything else that isn’t, even if only slightly. If you’ve hit a guard and they don’t drop, you better hope someone is nearby to finish them off, or the alarm will be immediately raised. Not instantly killing a player might not be as terrible, but it will expose your position and probably have them instantly closing the distance or getting behind cover.

So in the grand scheme of things, it is much more beneficial to have the bow pulled all the way back for each shot (your crosshair will let you know when it’s at maximum). It might take an extra second or so, but the payoff is well worth the time cost. And if you’re not in a safe enough position to pull the bow all the way back, you should think about relocating rather than taking a weaker shot. 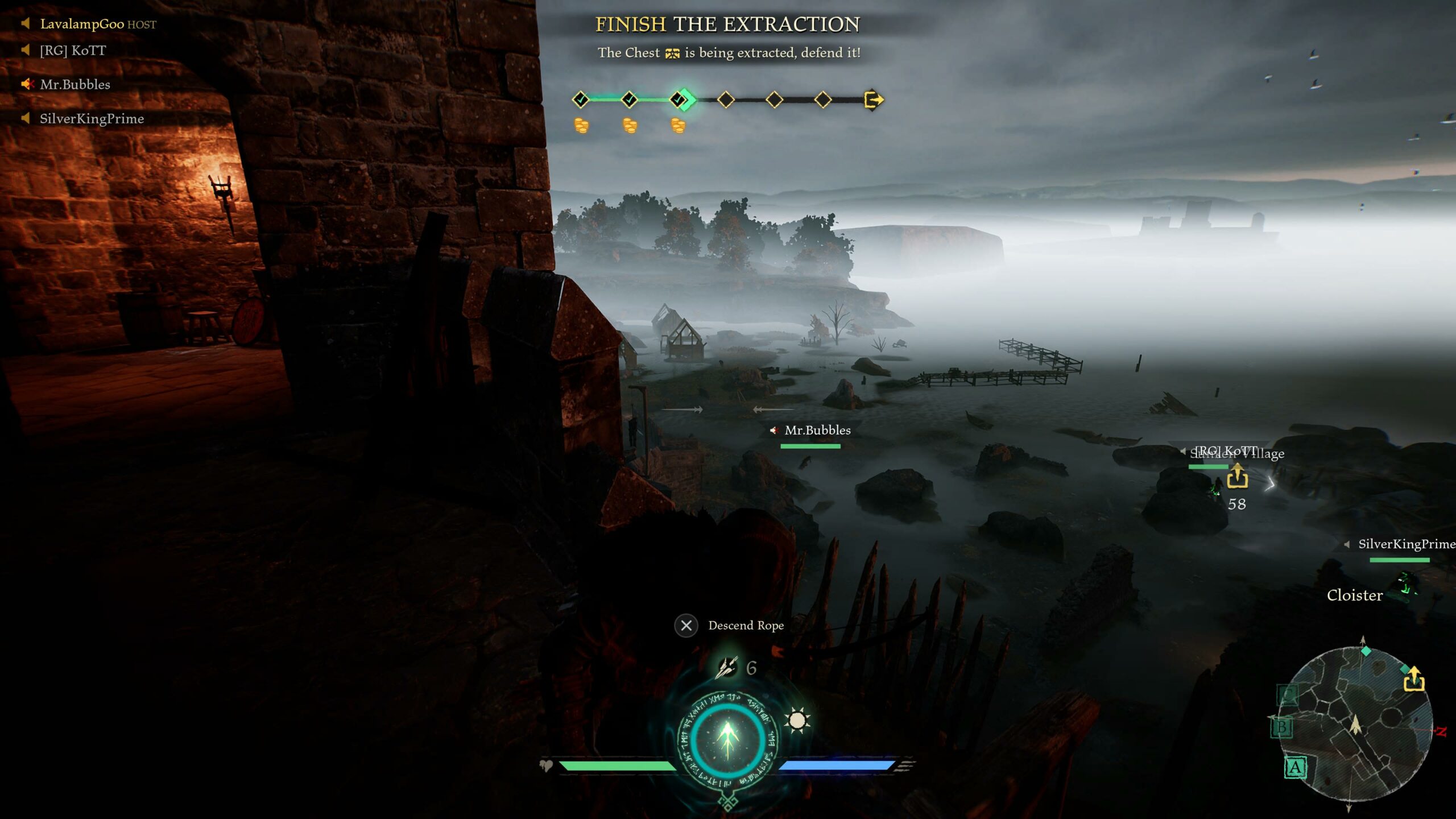 The Ranger in Hood: Outlaws and Legends has the best range of anyone in the game, unsurprisingly. Use this to your advantage whenever possible.

The start of most levels has you infiltrating a towering castle, but the end often has you fleeing back to the lowlands. Rather than joining your team on the floor, look to take up position on the castle walls so you can better survey the ground and exploit your height to take on enemies. When the winch comes into play, look for a position where you away from the action but still have sight of the winch itself, so you can kill any enemies that attempt to seize control.

But you can nearly always find a comfortably high spot before the endgame too. Look for staircases, ropes, ladders, and balconies that give you clearer sightlines over cover and plenty of room between yourself and the opposing team.

Arrow drop is a thing in this game, and as with any other game – and real-life archery assumably – the only way to get a feel for it is through practice which will come naturally as you play Hood more. But having a height advantage also reduces the amount your arrow will drop and can give you a great boost in making difficult longshots.

Discretion Is The Better Part Of Valour 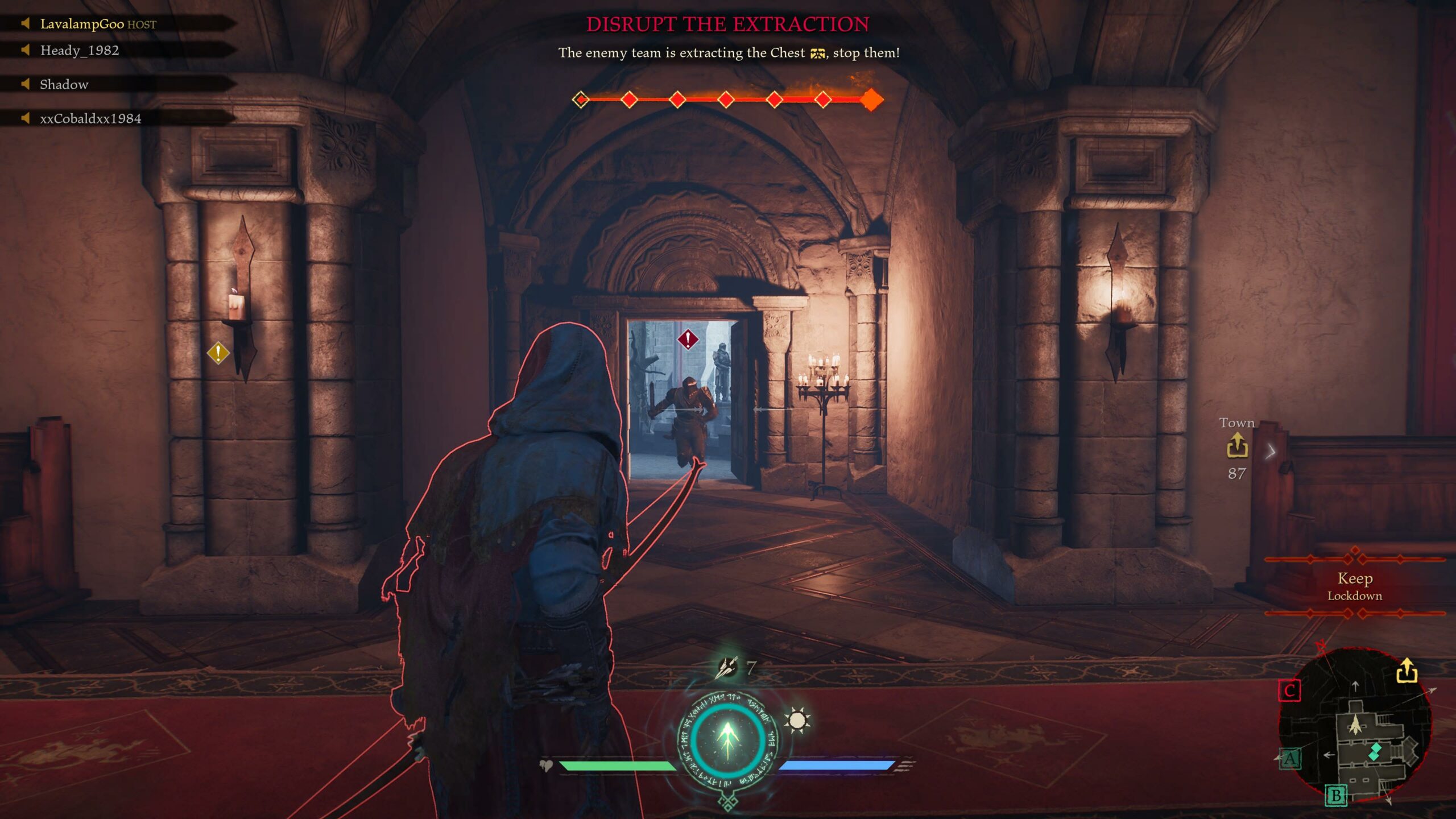 After years of retellings and a bunch of other video games, you might think that Hood can carry a sword and a bow, but he doesn’t. If you want to engage at close range, you’ll be doing so with the butt of your shooty stick, which is not very effective. So for that reason, avoid getting into close-range fights wherever possible.

It can be tempting to run in when the other team is cranking the winch or running off with the chest, but that is what the mystic and brawler are for. You should stay back, out of sight if possible, and work on removing the enemies from a distance.

Sometimes you’ll be forced into a melee confrontation, and it can be quite hard to escape once you get stuck in. If you find yourself trapped in a fight, immediately tell your team you need help and rely on your dodge mechanic to avoid the incoming blows and stay alive. Stamina is brutal in Hood, so it won’t be long before your opponent runs out, although dodging also takes your stamina. If your teammates are close, keep up the dance until they arrive, then try and retreat and use your bow to support them. If it looks like you’re on your own, try and work in a sneaky strike every once in a while but make sure you’re focusing on self-preservation. If nothing else, you are taking up an opponent's time and attention and the rest of your team is hopefully using it to their advantage.

Splitting An Arrow Isn't As Useful As A Multikill 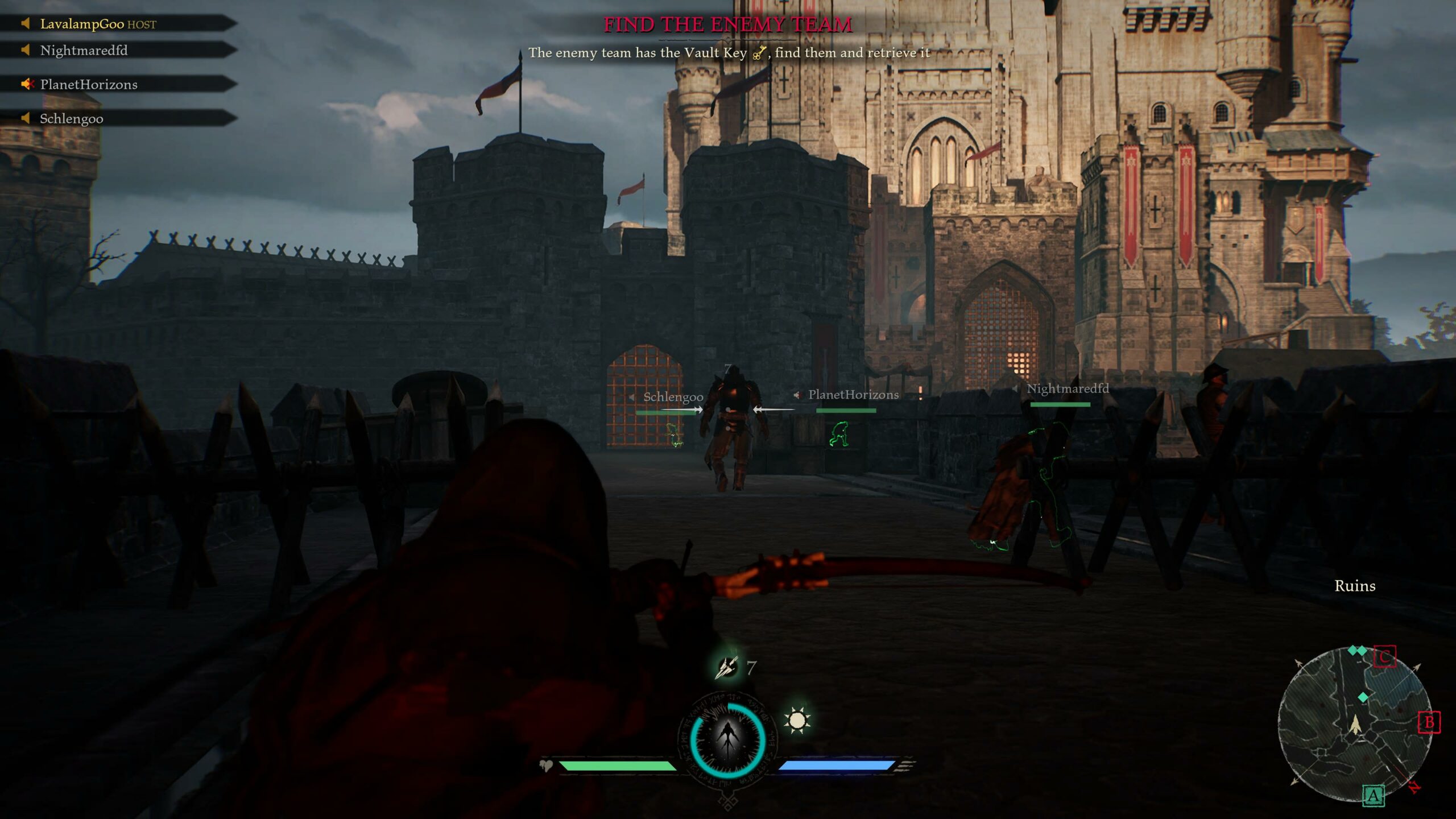 Each character in Hood: Outlaws and Legends have their only unique ultimate. The Ranger’s is one of the slowest to charge but is an incredibly effective explosive arrow. For this reason, save it for dire circumstances or when you know you can use it to its fullest effect.

This ult does enough damage to stagger the sheriff, which can be very useful when getting chased by this Sauron lookalike, but it powerful enough to kill players caught in the fairly wide area of effect and should probably be saved for such a moment.

Look for situations where the enemy team can’t escape or don’t want to retreat, and use it to take out as many as possible then. If a large scrap occurs in a tight space, this can clear out the enemies nice and quick and give your team a chance to get some work done while they’re all dead. Another fantastic opportunity is to use it when the winch is in effect. If the enemy team has two crankers you can dispose of both of them with one arrow. At the very least, you can force them to flee the area for a moment, which can be very effective if the rest of your team are about to attack.

Don’t bother using it on a single enemy or in situations where you’re under attack because it takes a while to get another arrow (you’ll probably get a maximum of three in a standard game), you’ll want to make sure you’ve got the best chance to scoring the hit you need.

Keep an eye on Ammo Stashes 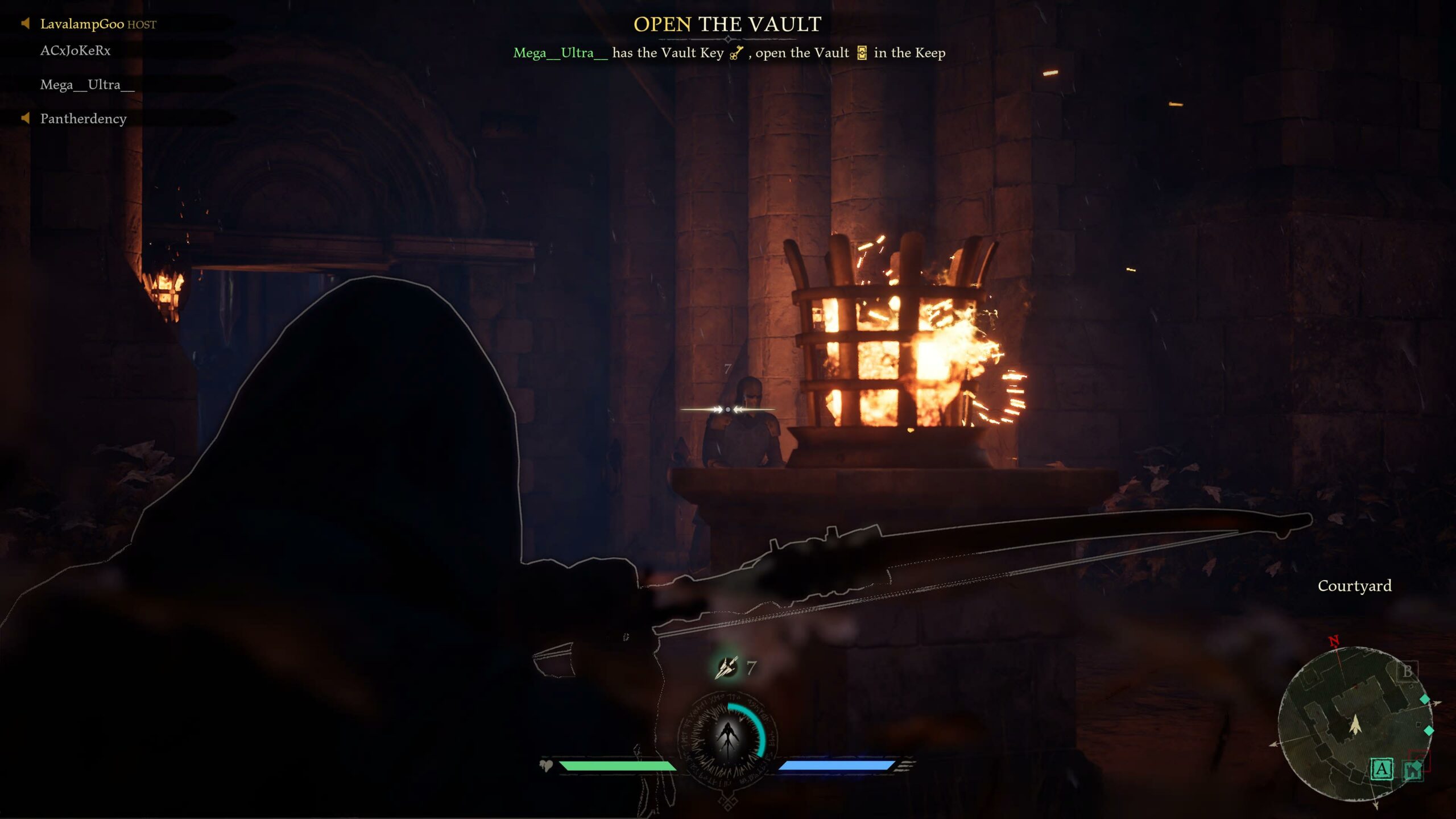 As previously mentioned, the Ranger isn’t much of a fighter and is at his most useful when he’s set up like a sniper overlooking the action. But before you hunker down on the castle walls, take a look around and make sure you know where the nearest ammo stash is.

These are fairly generously dotted around the map, so it shouldn’t be too far from any opportune sniper nests, but it's so worth making sure you know where you can run and refill your quiver before you need it.

It’s a little thing, but your damage support can change the game. Without it, you’ll be left tagging enemies and hoping your team is in a good enough position to fight them off. Wounding some or thinning out their numbers is much more effective, and it's better to spend a minute to learn where the arrows are before you need them, rather than in the middle of the fight.