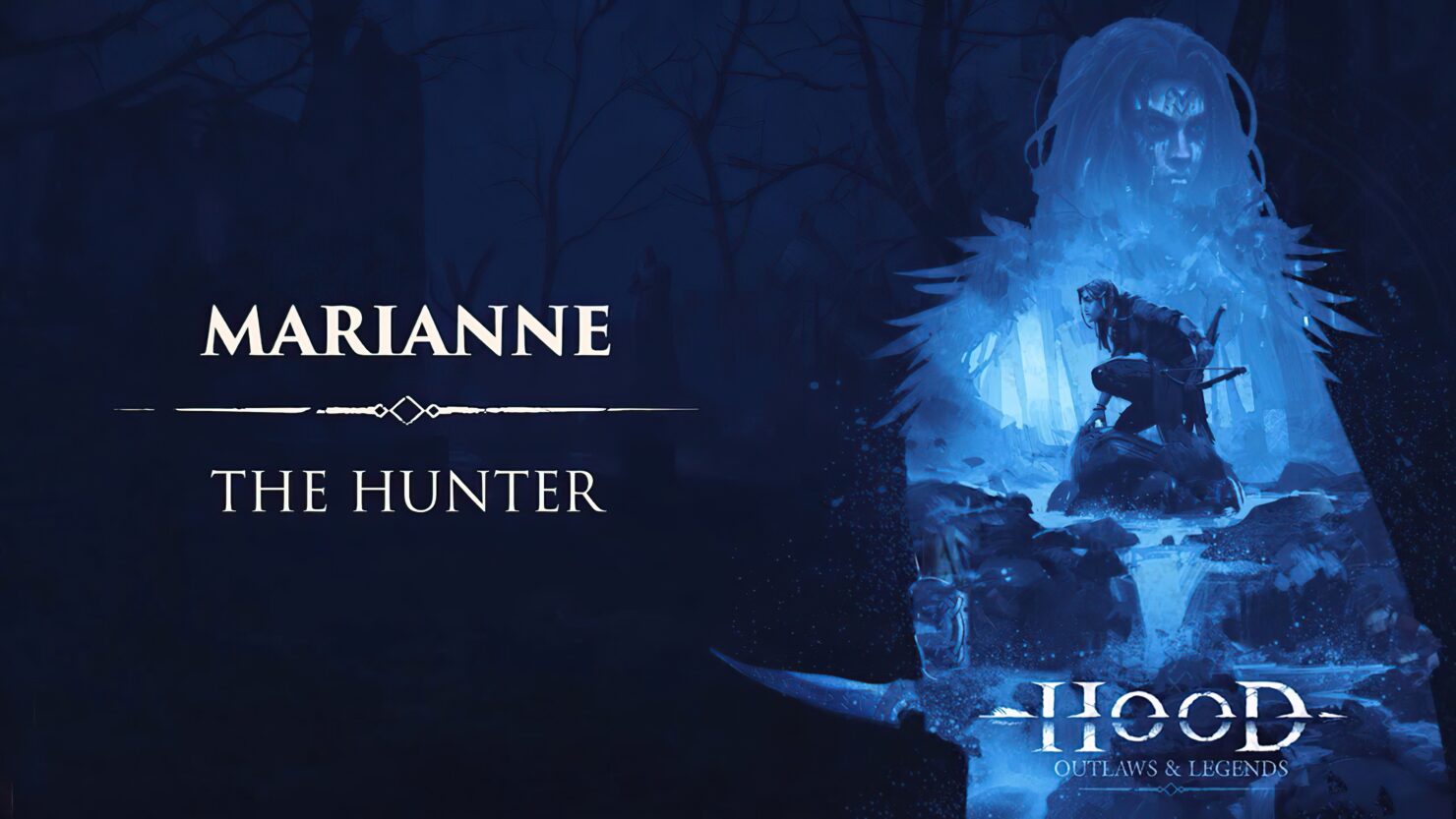 Marianne is the hunter in Sumo Digital's new game Hood: Outlaws and Legends. She is the knife in the dark, the stealth build, and the reason most other players will periodically look over their shoulder. But she is also a tricky character to play in a game that can often descend into a scrum and a sniper tournament.

This guide will explain some of the basic tenants of the Hunter, how to play her, and how to survive the heist.

Other Hood: Outlaws and Legends guides: Beginner's Tips and Tricks, Robin the Ranger, John the Brawler, Tooke the Mystic 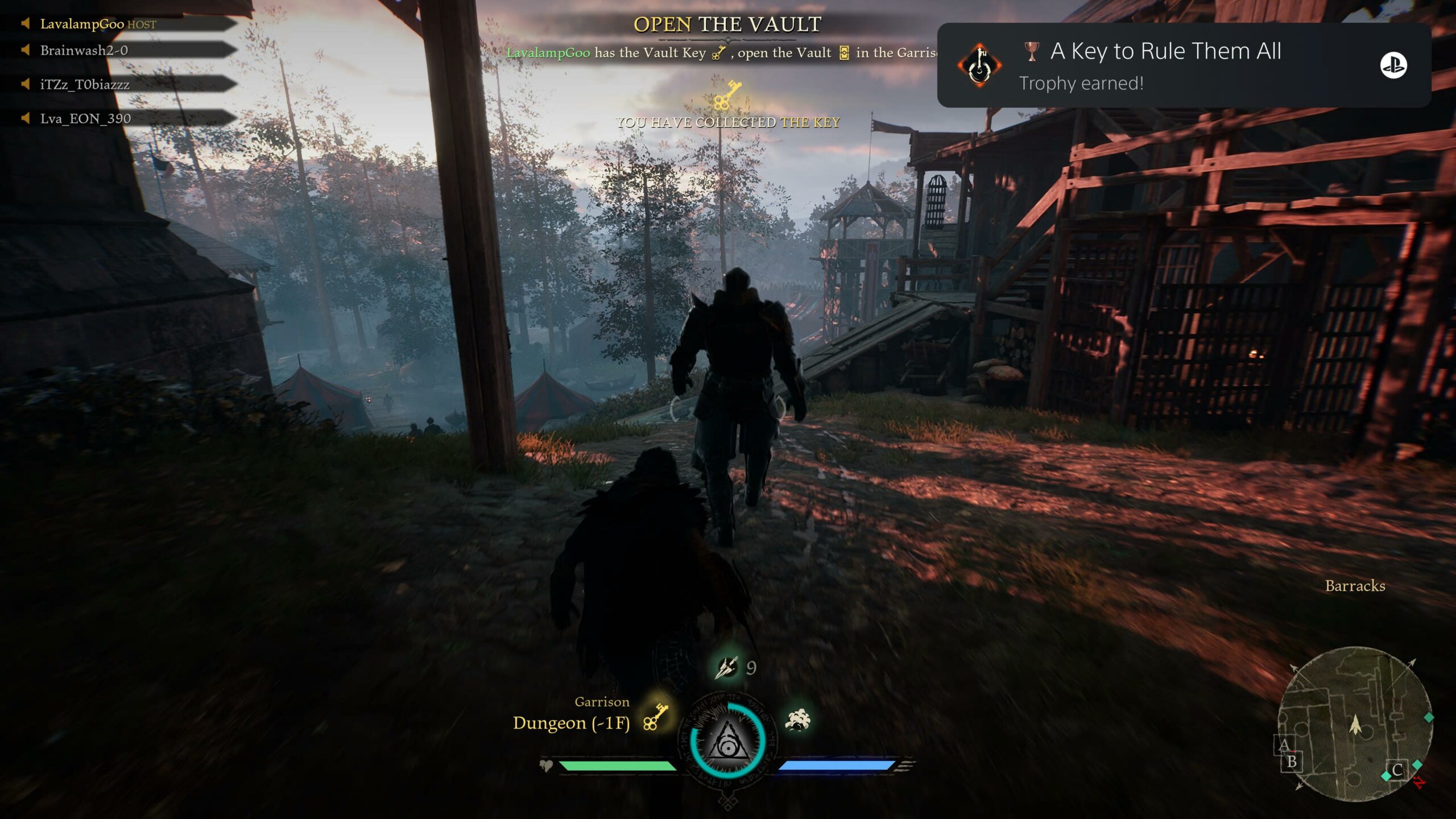 Hood: Outlaws and Legends is a game of three parts, and Marianne’s sneaky skillset is best suited to the first half. She is built to be extremely effective against the State guards and the sheriffs but can struggle to keep up with the large PvP fights that occur towards the latter end of the game. So, exploit the early opportunities of the game as best you can.

Stalk the castles and manors to pinch the key from the Sheriff and find the vault door, remove State Guards from key routes and open new ones, and capture Control Points as much as possible. If you see a low enemy player exploring the terrain, take them out and cut them off from your territory. If you see the whole party, tag them and remain hidden, organizing your team to repel them later. Act diversely and confidently, either leading the team or striking out on your own, as these moments can put everyone else in a better position for what comes next.

When the chest comes into play, you’ll need to learn to adapt to the more powerful pressure of the other team. But that doesn’t mean you’re useless. 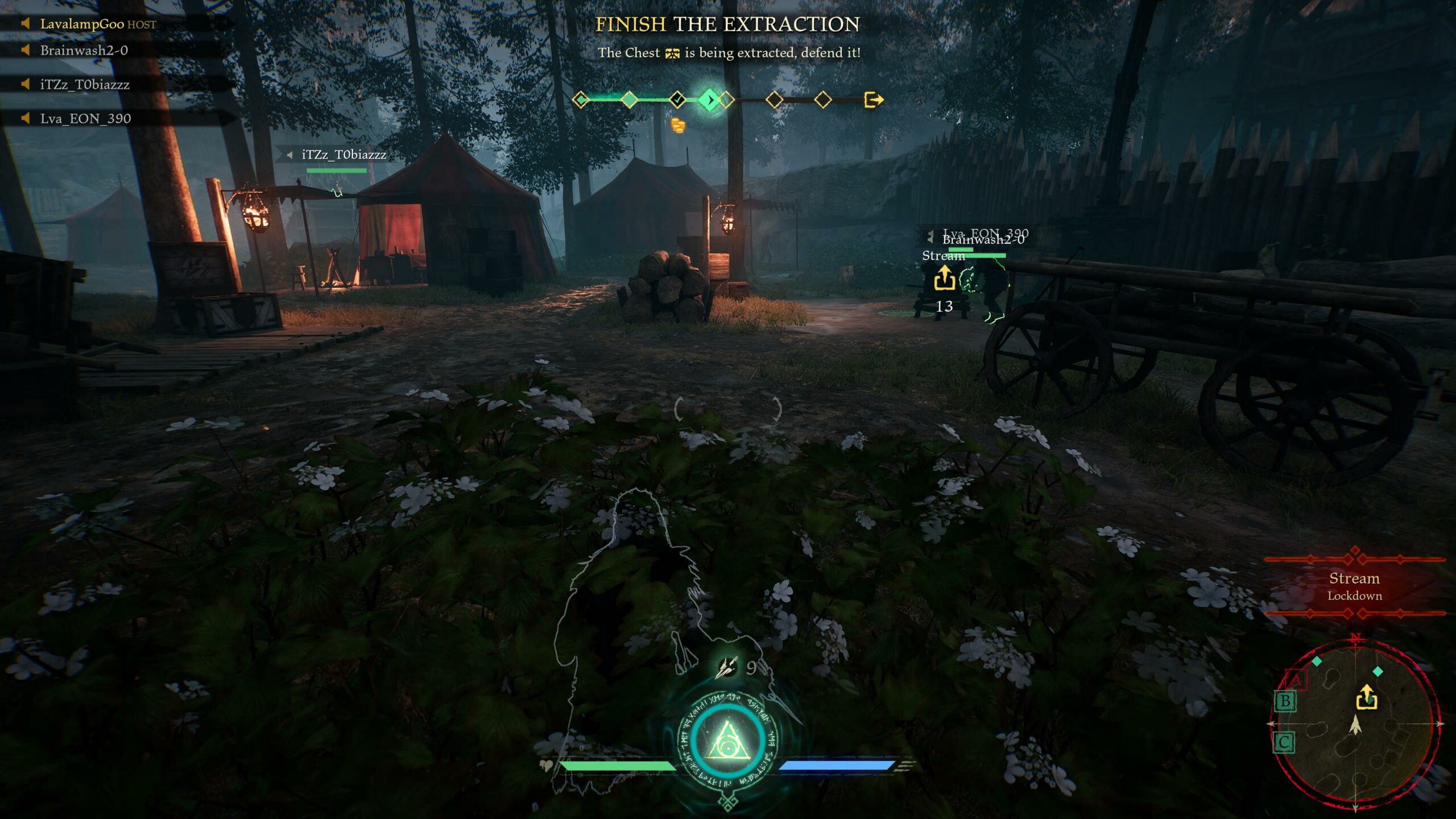 When the other team becomes a more consistent threat, normally around the time the chest is being lugged to an extraction point, you’ll have to swap out your tactics. Like a real hunter, sometimes it's better to let your prey come to you rather than go out hunting them.

Looking for effective hiding spots around key locations on the map. Places where you can spring into the action quickly but are far enough away that the other team won’t accidentally stumble upon you. Most importantly, somewhere where you can see the other team coming. You might be tempted to do this around the objective, like the winch or the chest, but sometimes it's better to set up between the enemy's approach, catching them as they trickle in, before they’ve got their guard up.

Once you’ve comfortable in your ambush location, you’ll have to learn to rush in and rush back out. The Hunter is not a fighter and won’t do well against more than one enemy at a time. Find your mark, take them out as quick as possible, then flee somewhere. Assassinations are great here, letting you quickly remove an unaware player if you can get behind them, but don’t hang around afterward. Your ranged attack can be useful too but don’t rely on it to be fatal every time. Be ready to give up your ambush location, too, if they start trying to counter your assaults.

Even if you aren’t getting kills every often, the fact that you’re out there, sharpening your blade to strike at any moment, will slow the other team down. And if you can team up with a skilled Ranger, this can be the perfect moment for him to strike.

Use All Your Tools to Escape 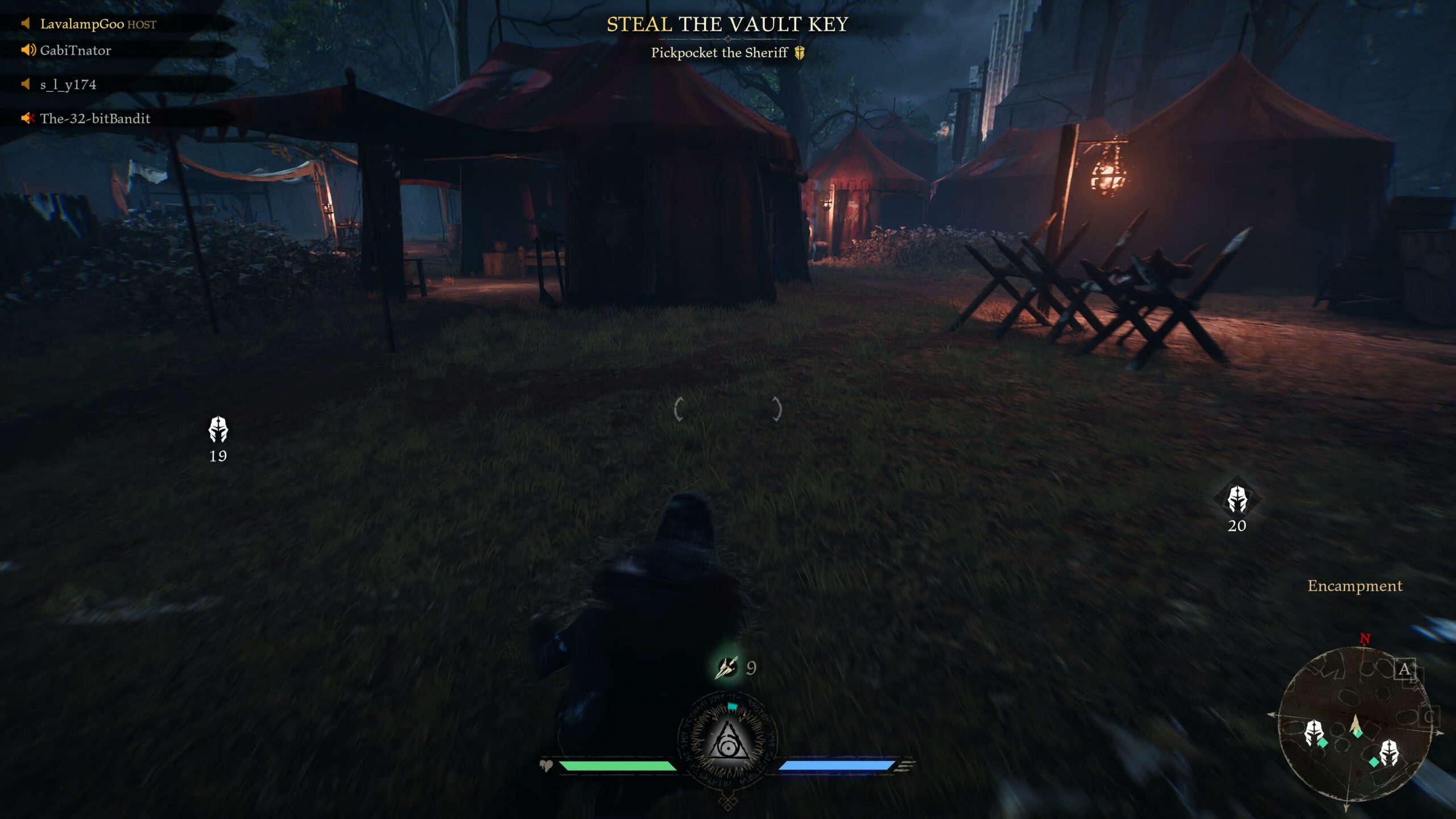 Marianne has a utility belt worth of equipment to escape situations that aren’t in her favor, and you should use them all. Stamina in Hood: Outlaws and Legends is precious and fleeting, so don’t just rely on sprinting and dodging to get out of trouble.

Invisibility can be a fantastic option, but it isn’t that effective for players in close range. Your shadow is still quite visible, so it won’t confuse them much if they’re already looking at you. Try and break the line of sight before triggering your ultimate, and avoid running in a straight line.

Smoke bombs likewise are extremely effective against State Guards (and yes, Marianne shouldn’t be in a melee fight, even with NPCs). These tools will cause any caught in the cloud to stop and cough for a few seconds, giving you an assassinate them or escape. While it isn’t as effective on other players that won’t be stunned, it can be used to effectively break the line of sight and get out of immediate danger.

Your ranged weapon can also be valuable too, even in desperate situations. Charging it can take several seconds and greatly improve the damage, but that is better used when you have more control over the situation. A single headshot will do considerable damage and might take down an already weakened player, but any hit will briefly stagger the opponent. Use this moment to escape if needed, or try and coordinate with teammates to rush in and finish them off. These are especially effective against the Brawler, who doesn’t have any ranged capacity. 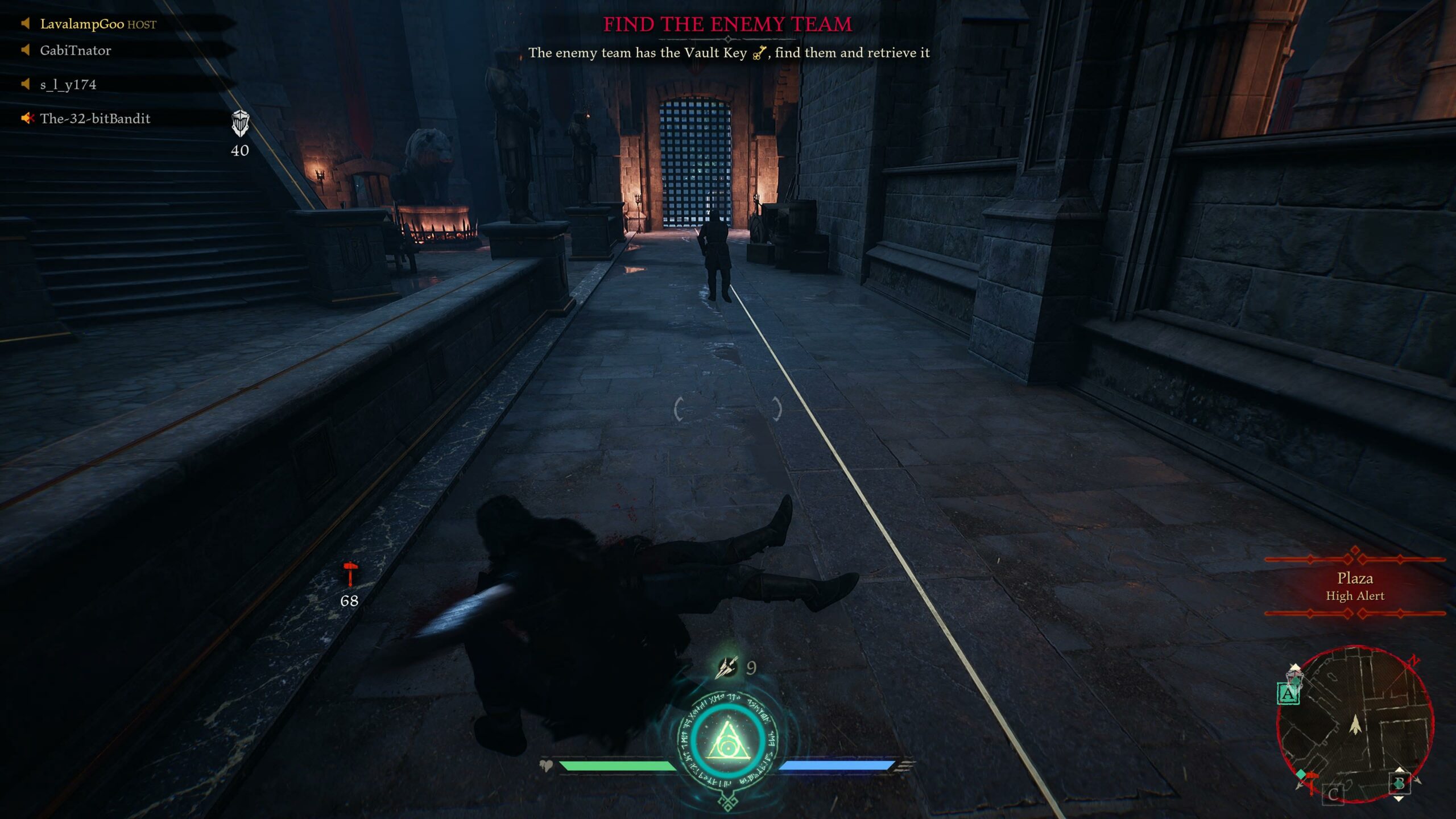 Whether lying in waiting or stalking your prey, it's important to know exactly who you should remove from play, and that really depends on the situation. Remember that you should be more objective focused at the start of the game, but as it carries you can spend more time disrupting and assassinating enemy players.

If possible, try and identify the player on the opposite team causing the most trouble for your own. This can often be a sneaky Hunter, but an equally skilled Ranger or Brawler can effectively shut a team. If you know who your team doesn’t want to see, do your best to make it happen.

Another way of looking at it is to see where your team's weakness lies. If you don’t have a Ranger and the opposing team does, you’ll want to make sure they can’t use that advantage against you, for instance.

But don’t forget about The Mystic. This support class can keep the rest of the team in the fight, so if you get the chance to get the drop on him, it's normally the smartest play available.

Stealth is Harder than it Doesn’t Look 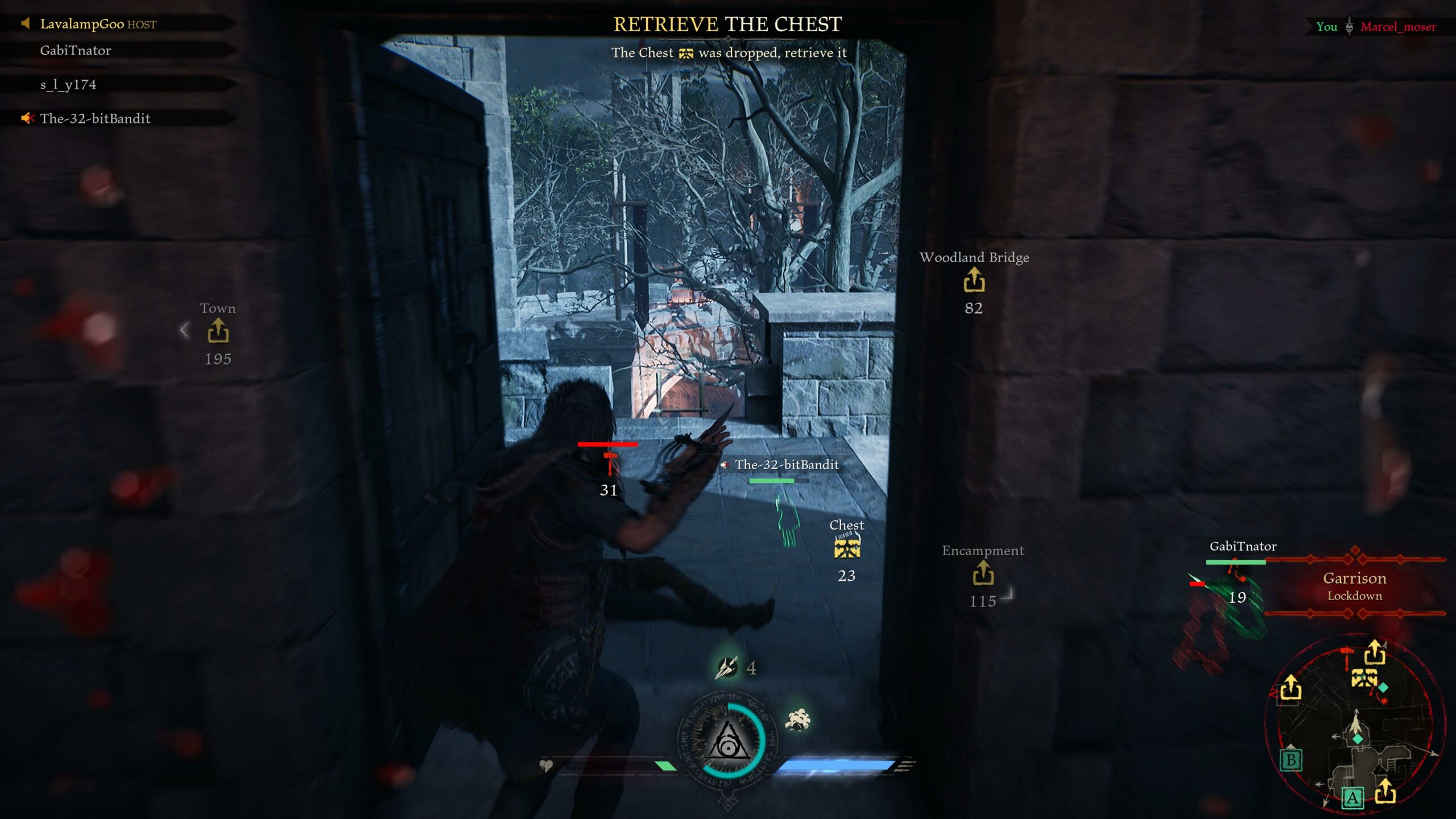 PvP games with stealth can be a difficult balancing act for both the players and the developers who make the rules. Some allow players an extra degree of invisibility when hiding, while others don’t. Hood: Outlaws and Legends fit firmly in the latter. While crouching in the tall grass is enough to fool the State Guards, you will nearly always be seen by the other players, even when standing still. And with no real cover system, you’ll likewise be spotted lurking behind waist-high cover. And as mentioned earlier, Marianne’s invisibility isn’t powerful against other players either.

Stealth then requires you to physically break the line of sight. Hide behind corners or pillars. Anything large enough they can’t immediately see around. Use a height advantage where you can stay out of view, especially if there are easy ways to drop down and more difficult ways for someone to get behind you. Stay still where possible not to draw attention and remember that if one player has seen you, you’ve probably been tagged for the rest.

This is why the Hunter is such a difficult class to play at the end of the game when the other players have a keen understanding of where the objective and the State Guards will most likely have already been removed. Use what you can to avoid detection and get those all-important assassinations before disappearing back into the shadows. Just make sure no one is sneaking up on you while you do so.