The TV shows, films, animations, and storybooks all make Robin Hood’s exploits look easy, but those picking up Hood: Outlaws and Legends might find themselves in a much trickier position when they begin this new PvPvE game by Sumo Digital. Stealing the treasure chest from the sheriff is difficult enough without a band of enemy thieves attempting to do the same.

For those of you sick of getting shot in the head, stabbed in the back, or clubbed from any direction, these tips and tricks will transform you from lowly pickpocket into suave bank robber in no time.

Triggering An Alarm Is Worse Than You Think 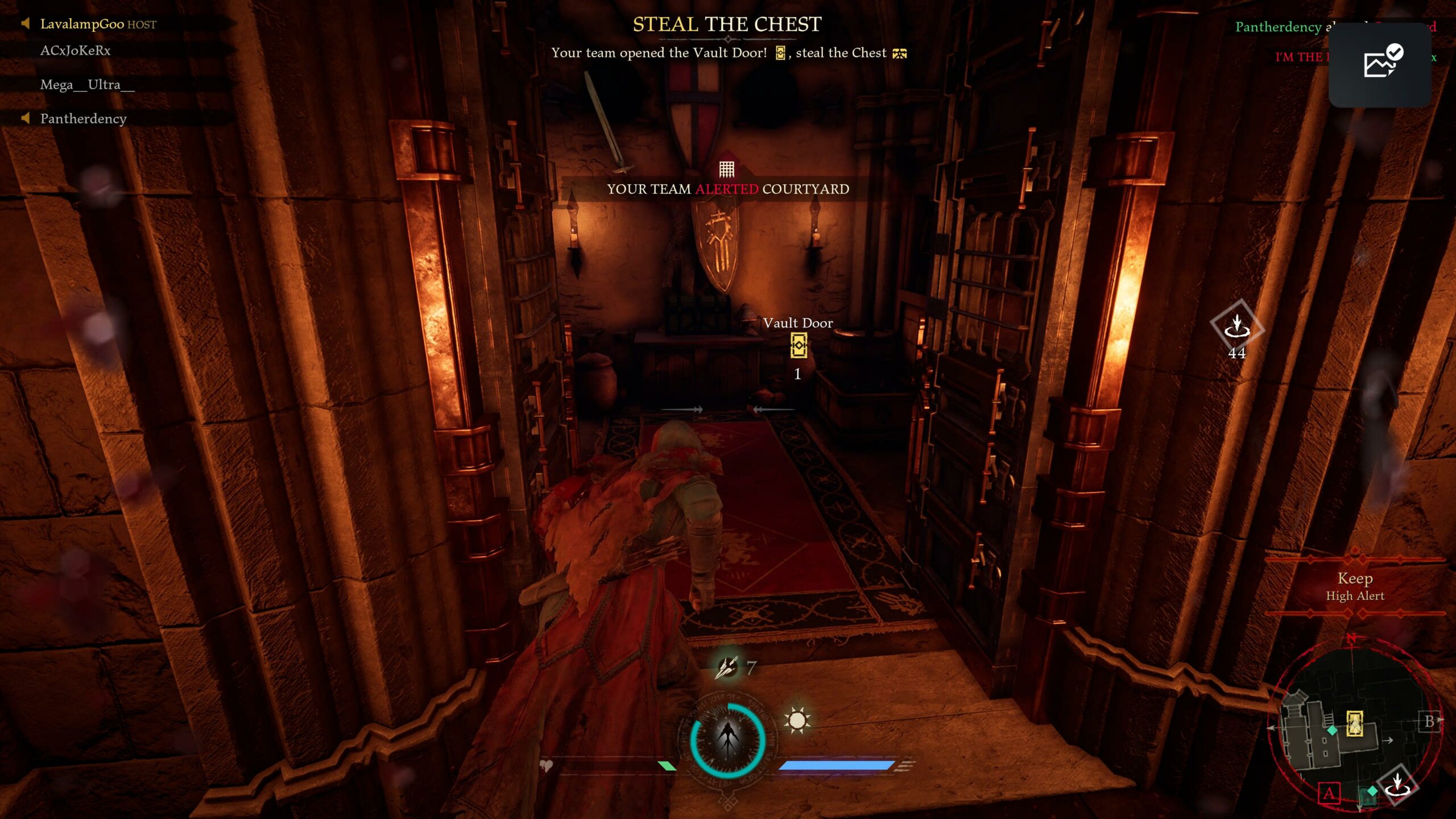 Hood: Outlaws and Legends warns you that triggering an alarm is a bad idea. Not only will it summon state reinforcements to the area, but it will also lock down the doors, making it hard to escape or travel through. But it's even worse than that.

Triggering an alarm will also alert the enemy team to your location, and they are a much bigger threat to your heist than any armor-clad, AI-powered dolts. Some players think the best option is to charge in as fast as possible, ignore any alarms, and hope to find the key, vault door, and chest before the other team has crept from their spawn, but it is much more effective to be slow and steady.

If your team can steal the key without triggering any alarms, the other team will not know where you are unless they have physically tagged you. On that note, make sure you’re tagging enemies when you see them, as it will give your team an immediate sense of where they are on the map, especially if their team is as sneaky as yours. The same is true with the vault door and carrying the chest. The chest is an especially dangerous section since you will be at least one player down as they carry the thing. They will also be more vulnerable to attack, so doing that undetected is worth moving more slowly. You can even use the other team's alerts to see if they are closing in and attempt to hide or ambush them should they get too close.

Using a winch will mark you on the map, but if you’ve played it quietly up until now, you can probably get a good chunk of the segments before the other team can catch up. The rest of your team might even have time to set up an ambush for the first desperate rush in to stop you.

Assassinations Aren’t Just A Tool Of The State 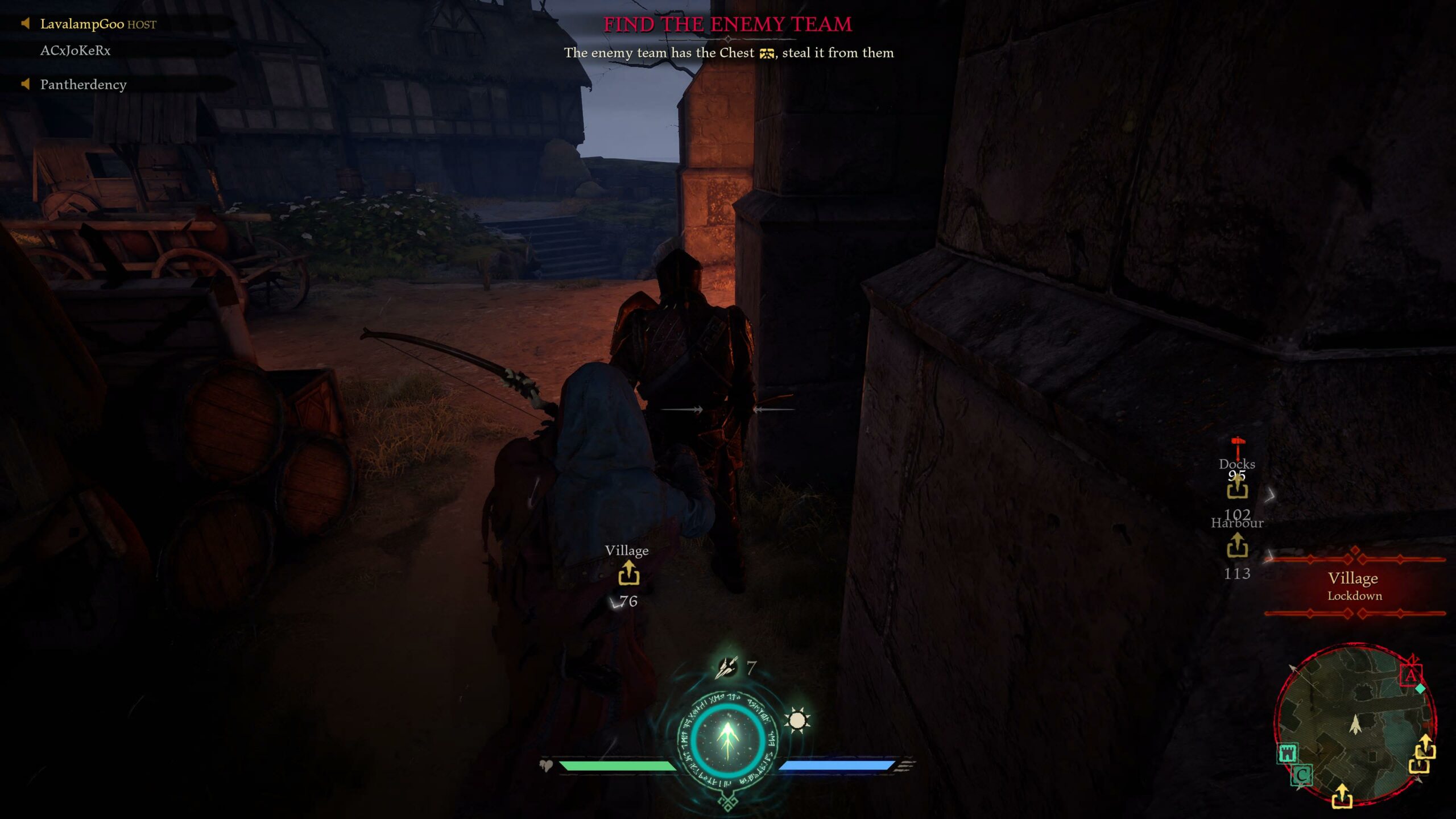 The tutorial for Hood: Outlaws & Legends left a fair amount to be discovered on your own. If you can approach a state guard undetected, you can kill them silently, earning yourself some coin and experience. But what Hood: Outlaws and Legends doesn’t tell you is that it is equally effective against players.

When you see another thief skulking in the tall grass, it can be very tempting to charge at them, disrupt their plans and get into an awkward slapping fight while the state guards wander past. But try and get the drop on them instead. Sneak up from behind and take them out silently. You’ll receive extra experience that way, but more importantly, you’ll remove them from the area without putting everything into lockdown. 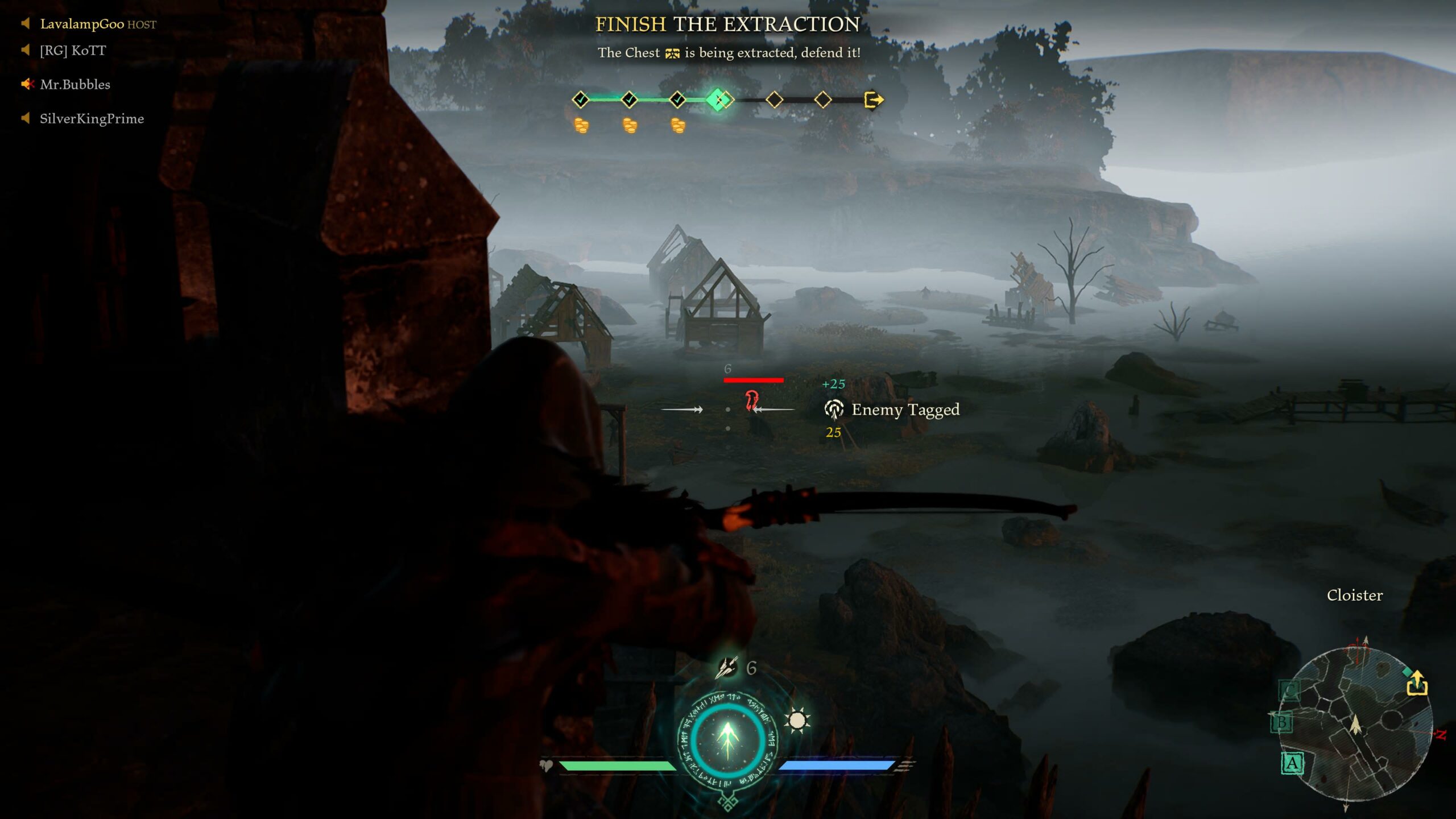 If you wanted to boil down all these tips into their most basic element, Hood: Outlaws and Legends will punish you for rushing in. There is melee combat in the game, but it's awkward and difficult to predict, and it is nearly always better to take your time and plan your approach to the challenge at hand.

When facing off against the other team, don’t do it alone. If you spot them, tag them and give your team time to arrive. Once you’ve all arrived, try and position yourselves for an ambush and engage all at once. Trickling in will get you all killed. If you’re a ranger or have one in your party, make sure they’re taking advantage of the maps vertically and try and have them above the action, raining damage down on everyone below. The Hunter should be in the enemy's blind spot, ready to instantly assassinate any that stray or fall behind from the rest. The Mystics and Brawler should be ready to ambush. Wait around a corner or above the walkway (make sure the fall isn’t deadly, though). When they drop into the action, ensure everyone is ready to go.

If the enemy team is winching the chest, you’ll need to think this way too. The winch takes a while, so it can be worth sacrificing a few segments for a better chance at getting the all-important final tug. Look for different avenues of approach, use the environment and its sightlines to get as close as possible. If you see a brawler working the mechanism, make him the first target dropped since he’s the fastest wincher. More than anything else, communicate with your team however you can and work together, as a unit, rather than rushing in and getting stomped on as individuals.

When God Closes A Portcullis, He Opens A Door 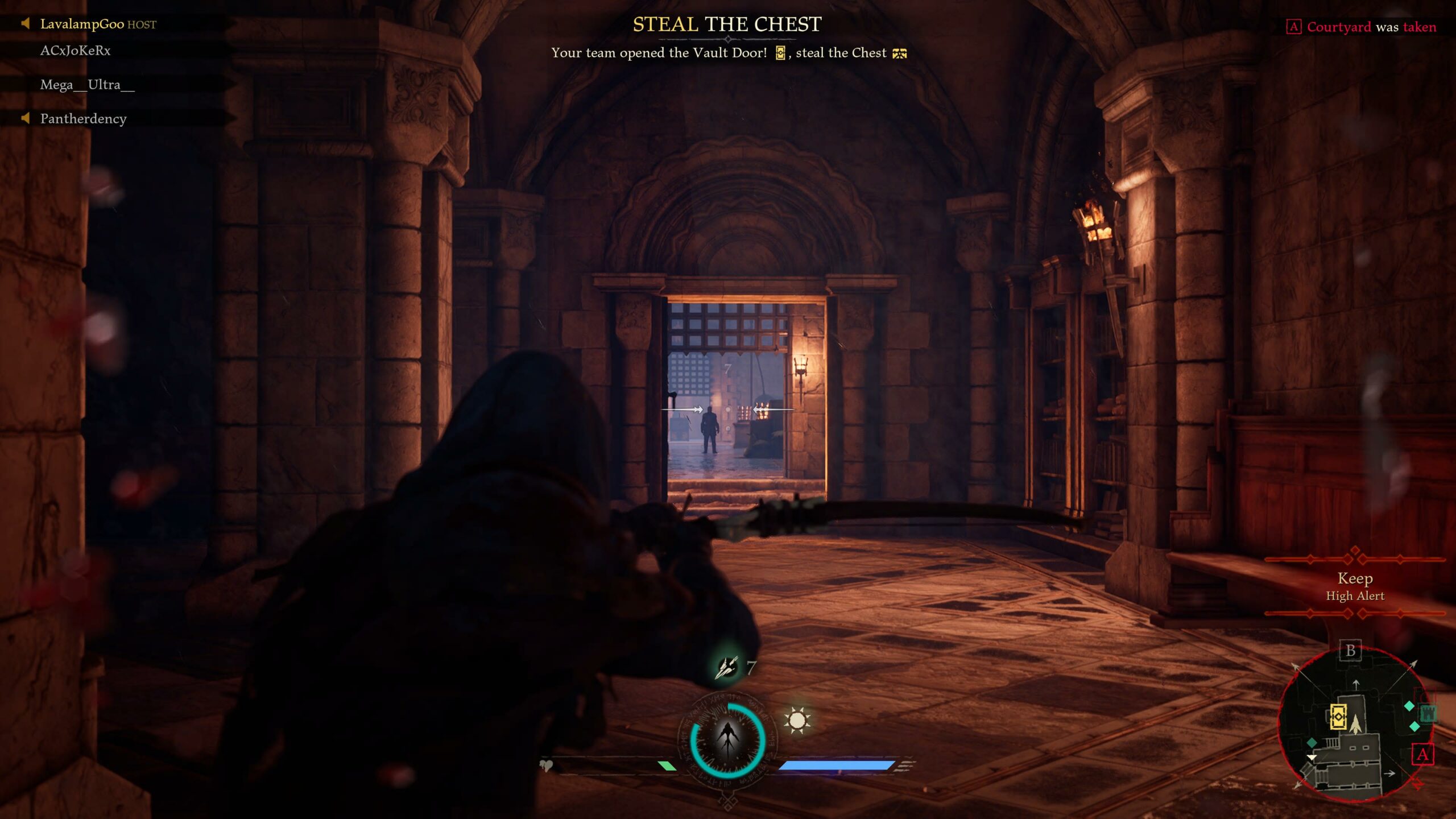 Something that is just entirely omitted in the tutorial is that doors can be opened in Hood: Outlaws and Legends. They can only ever be opened from one side, much like shortcuts in Soulsborne games, and can be quickly effective. When creeping through the castles and towns of the game, take a moment to look for shortcuts and open them if they’ll be helpful.

Be careful though, because the other team can use them to their advantage to, so where possible make sure the shortcut is open between spawn points you control and not allowing the enemies any more access than they already had. The same is true with ropes that you can throw down. Ensure that doing so doesn’t give any smart opponents a chance to get behind you or speed up their next assault.

Shortcuts are most useful during lockdowns after a thief has been spotted. Only one character can open Portcullis’ but everyone can walk through the door if you’ve opened it.

Save The Control Point, Save The World 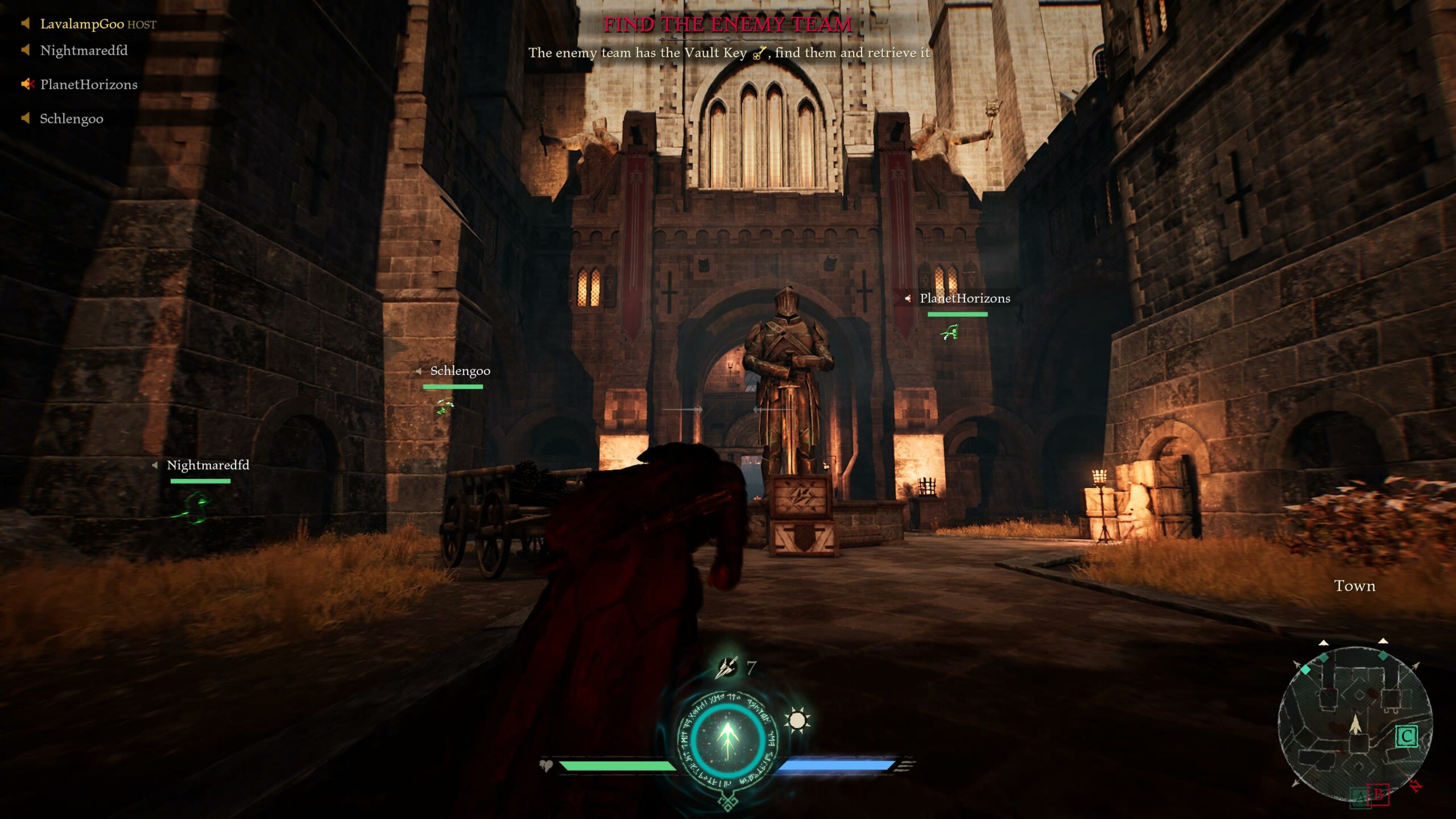 You might think that control points are only really effective at the beginning of the game and not worth the time and effort when you’re into the winching during the endgame. This isn’t true. Control points are incredibly valuable throughout the whole match, and even if they aren’t always helpful for your team, denying your enemies the advantage is just as worth it.

A Control Point allows you to respawn in that area, and there are three on every map. Capturing them at the beginning allows unlucky thieves to rejoin the action much quicker as you hunt for the key and the vault door. Once the chest and the winch are in play, these can be used to shorter the route to the action greatly or flank the opposing team.

Unfortunately, Hood: Outlaws and Legends is quite bad at notifying if a spawn point you control has been taken, so do what you can to keep an eye on the top right corner to see if anything is changing hands or open the map every once a while to check for yourself.

Most teams will try and use the winch nearest their starting spawn, so ensuring you have the closest control gives your team a fighting chance. But if the winch is nearer your end of the map or somewhere in the middle, use the control points to flank an enemy team if you’re on the offensive, and keep them from spawning there if you’re trying to defend the winch. So many players will entirely focus on claiming the winch back that they can’t hold without the nearby Control Point, so make sure you’re keeping it out of enemy hands.