Fragmentation is undoubtedly one of the most significant problems that plague Android as a platform. A majority of Android-powered devices out there are running an older version of the operating system, with no hopes for an upgrade. It is a multifaceted problem caused due to several factors such as complacent OEMs, the sheer number of devices, and Google's unwillingness to impose harsher penalties on OEMs who default on their promises. While initiatives such as Android One, Project Treble, and Project Mainline have helped bridge the gap a little, it'll take a lot more than that for Android to get iOS-like results. Things have been getting marginally better, though. The last time Google released the numbers of Android adaptation, Oreo was on less than 10% of all devices. Google today shared a new stat that highlights Project Treble’s successful impact on Android updates. 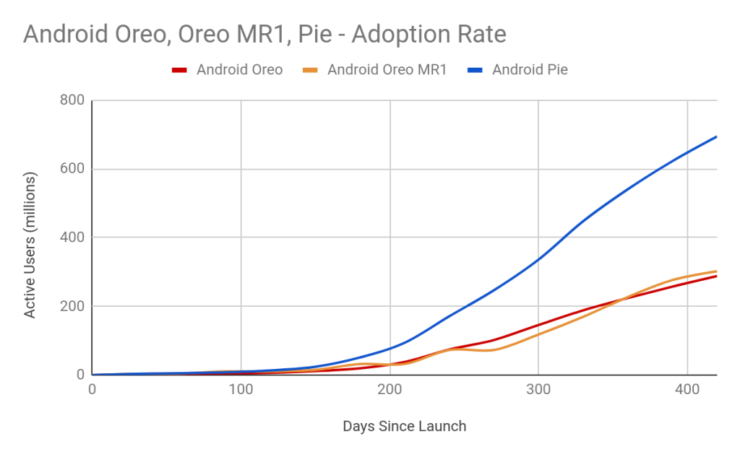 In late August 2019, Android 9 (Pie) accounted for 22.6% of the ecosystem, making it the largest fraction of the ecosystem and shows that Project Treble was a success. That’s more than twice as good as the update rate from Android 7 to 8 was the year before. Project Treble has also cut down the average time to upgrade by more than 3 months. We're yet to hear from Google about the actual number of devices that run Pie compared to Oreo. Google further states that Treble is responsible for upgrades from Android 9 to Android 10 going up.

Google also expects to see faster upgrades thanks to their collaboration with silicon manufacturers such as Qualcomm, MediaTek, and HiSilicon. Furthermore, Project Mainline brings forth the ability for OEMs to push system updates through the Play Store. It will allow OEMs to install Google-signed Generic System Images and boot into them without having to modify the factory ROMs on their devices. It will effectively let users and developers try upcoming software without committing to a full install.

Lastly, companies such as OnePlus have been at the forefront of providing timely software updates for their devices. Even Samsung, a company historically known for its slow rollouts, has started its Android 10 beta last week. Google also says that many manufacturers such as ASUS, LG, Motorola, OPPO, Realme, Sharp, Sony, Transsion, and Vivo have committed to updating some of their devices to Android 10 by the end of the year.