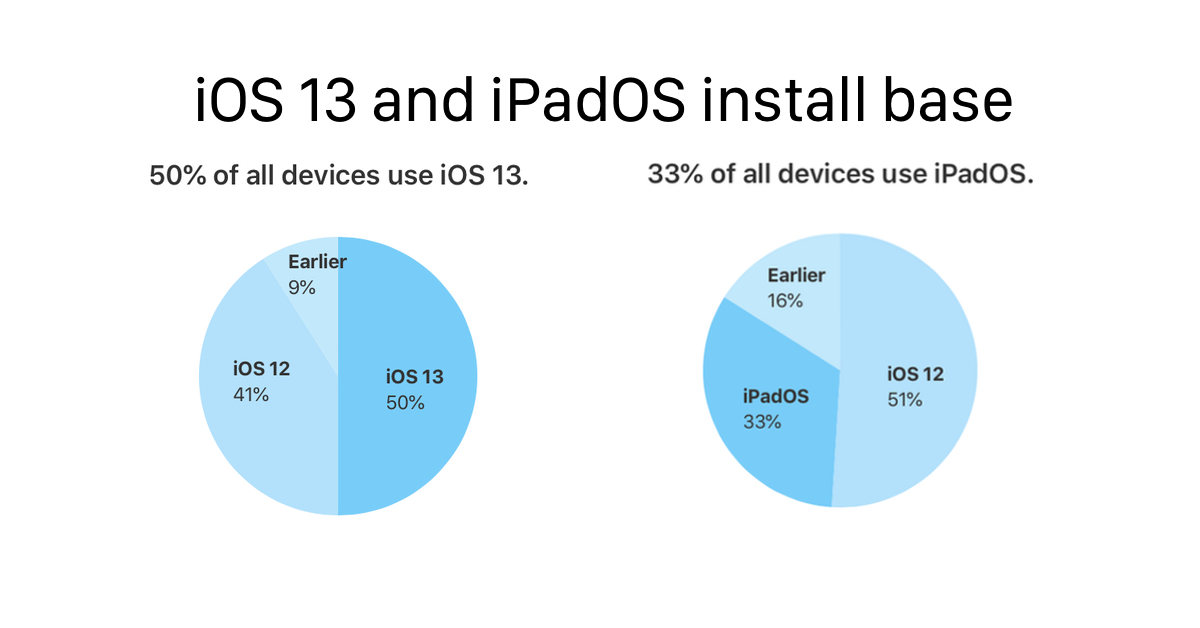 iOS 13 and iPadOS Install Base

Apple released these numbers on their developer website, where they updated the numbers on October 15. These numbers are measured by Apple from the App Store and used to inform developers on the operating systems that they should support with their apps.

Install base for all iPhones:

Install base for all iPads:

Despite the buggy roll-out for iOS 13 and iPadOS, and fewer number of supported devices, this is a great achievement for Apple. iOS 13 reached 50% install base in just 26 days after launch while iPadOS took just 21 days to reach 33% install base. However, when these numbers are put into perspective and devices are filtered to include only those released in the last 4 years, the numbers give an even better outlook.

Since the list of compatible devices reduced with these operating systems, the numbers are not as good when compared to iOS 12's release. Compared to the only competitor that iOS has, these numbers are way better. Android 10 based devices are so rare that Google does not even report the numbers on their website yet. The most popular Android release is still Android 6.0 Marshmallow, with 16.9% distribution. Marshmallow was released back in 2015.

These are the top 3 most popular Android versions as per Google:

This means that developers have to support a large variety of operating system releases and API versions. It is one of the biggest reasons why developers often favor iOS over Android. For users, this means that they do often get the latest features or security fixes.

These high adoption numbers are due to Apple's tight integration between their hardware and software divisions, and the fact that iOS and iPadOS cannot be installed on other devices. Android is available on countless devices, which even include products that do not fall in the smartphone or tablet categories. There are pros and cons to each approach, and often the best one is where users get the most benefits.