Samsung Galaxy S6 and iPhone 6 are two of the leading smartphones topping all the charts of the year. Regardless of how many Android competitors come and leave, Samsung made a strong comeback after sloppy Galaxy S5 sales last year. Digit "6" has been no less lucky for Cupertino tech giant as it introduced larger iPhone 6 Plus and won over the hearts of its loyal fans while managing to convert some Android die-hards too.

With a palpable shift toward better camera and the increasing consumer demands of having DSLR-ish camera modules on their "thinnest" phones, camera has become that one feature which makes or breaks the deal for many smartphone user. While loyal fans would go to their party regardless of performance, security or durability issue, average customer has nothing to do with these wars as they want the best specs that the price could buy. 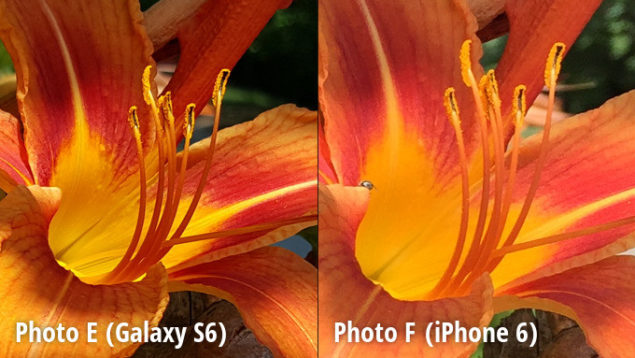 In a recent Galaxy S6 vs iPhone 6 camera face-off, Samsung's S6 came out the shining star and for some good reasons. Folks at Phonearena shared an extensive list of images shot from both the smartphones and asked readers to vote for the best images. As it was a blind test, users had no idea which photos were taken from what smartphone. Otherwise we all know it would have been of no use considering the fans from both the sides who would have invaded with biased votes.

A little surprisingly, Samsung Galaxy S6 managed to get a whopping number of 27,063 votes against iPhone 6's 3,033 votes. That sounds like iPhone 6 stands no chance against Samsung Galaxy S6. iPhone 6 has been getting some raving reviews for its 8-megapixel shooter, however, voters preferred Galaxy S6's sharper photos, especially in low-light conditions.

Well, while we try to handle the shock of that huge a margin, you can see all the Galaxy S6 vs iPhone 6 camera images from both the smartphones at PA and see the differences for yourself.