Last week, an Antutu score for the Samsung Galaxy S10 Plus surfaced from China. The device was powered by Samsung's Exynos 9820, and this score gave us a good first look at what to expect from Samsung's first 7/8nm processor. Now, just as Qualcomm has shed official light on the Snapdragon 855, an Antutu benchmark for the Galaxy S10+ that's powered by this gadgets have also surfaced. Take a look below for the details.

With the Snapdragon 855, Qualcomm has officially entered the 7nm fray, and right now, the company's looking in pretty great shape. Apple, in particular, has stepped up its processor game recently. Despite the fact that it throttles, Cupertino's A11 Bionic ensured that the company's silicon made its mark in the market.

Now it's Qualcomm's turn, and the company is once again focusing on the SoC as a complete package. We've benchmarks for the Samsung Galaxy S10 Plus today, which pit Android's two 7nm and one 8nm processor against each other. In the result, it's the Snapdragon 855 which comes out in the lead. Keep in mind that only the Snapdragon and Exynos power the Galaxy S10+. 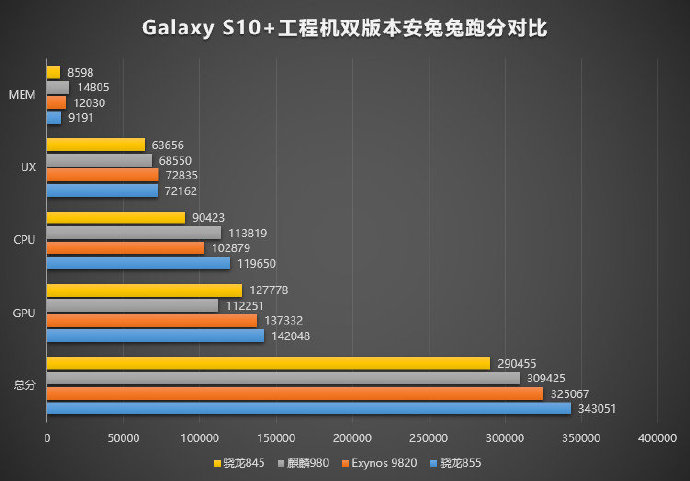 Courtesy of Antutu's official Weibo, the results show an 18,000 point lead for the Snapdragon 855 over the Exynos 9820. More importantly, this lead extends to CPU scores, and surprisingly, the Exynos 9820 is the weakest of the three latest Android processors in computing performance. While we can't reach concrete deductions from this data given that none of the chips is available for concrete testing, it nevertheless continues to paint a worrying picture.

Additionally, Huawei's Kirin 980 fails to impress in these scores, and they also settle Qualcomm's claim of 2x the performance of HiSilicon's chip. While the Snapdragon 855 does outperform every other processor, this isn't near what the company claims. Of course, in marketing speak, companies often restrict parameters to an extent and cherry pick the results for reporting. Now, all we need to do is wait for AI specific tests. Thoughts? Let us know what you think in the comments section below and stay tuned. We'll keep you updated on the latest.