In an interesting turn of reveal-events, Samsung Galaxy Note 4's Exynos 5433 proves to be making its bearer the first 64-bit Android flagship. It is still uncertain why would Samsung not cash on such a high-trend detail in the unveiling of its mass loved phablet, latest source code confirms that the SoC is actually a 64-bit A57/A53. While Exynos 5433 continued with the naming scheme of previous chipsets of the family, it is not a Cortex A15/A7.

Unlike previously assumed, Samsung Galaxy Note 4 features the powerful 5433 taking advantage of the 64-bit architecture. The device comes out of the box with Android 4.4 KitKat, hence there was no need as yet to take advantage of the said architecture. That is the reason why it has neither been advertised nor is it actually using the 64-bit architecture. Samsung Galaxy Note 4 will run on the regular 32-bit mode, however, the capability of Exynos puts the device ahead of other high-end smartphones as it will lead the game once Android L is released. 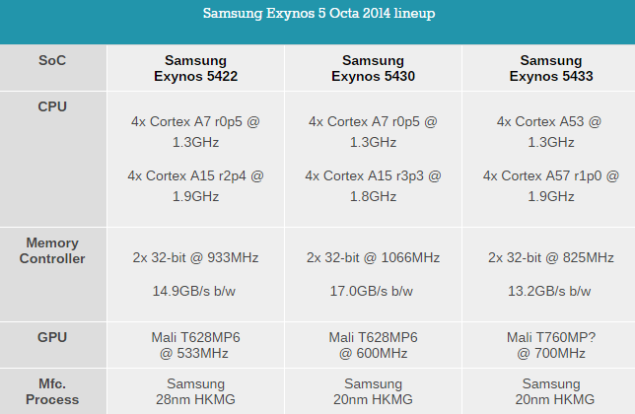 Samsung Galaxy Note 4 sports a 64-bit Exynos 5433 officially described as a 1.9 GHz octa-core processor. GPU is the upgraded Mali T760 clocked at an amazing 700 MHz resulting in some ceiling benchmark numbers. The 64-bit Exynos 5433 source code revelation comes through Anand Tech who have shared the details about the SoC and its current capabilities:

While the Exynos 5433 seems nothing more than a "brain-transplant" in terms of SoC design, the newer Exynos 7 chip is a genuinely new part. Over the last 3 weeks Samsung has been busy submitting patches to the Linux kernel mailing lists adding support for their new SoC lineup. The Exynos 7420 seems to be on track for Samsung's next flagship lineup, this time in full 64-bit AArch64 mode with Android L. The details of the chip are still sparse, but we'll be seeing the same A57/A53 CPU combination together with an Mali T760, powered by an LPDDR4-capable memory controller.

Another probable reason for Sammy to not advertise the Exynos 5433 powered Note 4 as the first 64-bit high-end smartphone could be that the Note 4 will be shipped with Snapdragon 805 in various regions. An architectural difference and future prospects could affect the user base of the regions where 805 is going to be sold.