It's no secret that one thing people have loved doing with their Radeon cards over the years has been to flash the vBIOS of a lower-tier card with a higher tiered model to great success. We've covered over the past years the way to fully unlock the RX 460, how a Vega 56 could get a serious bolster by flashing to the Vega 64 vBIOS, and most famously the RX 480 and it's magical ability to unlock an additional 4GB of VRAM! Recent reviews that have gone out for the Radeon RX 5700XT and the notice that many of them had to flash their vBIOS reminded me that I haven't given a go at the RX 5700 since I first got it.  So I went and checked, and there it was, TechPowerUp had sure enough listed their new ATIFlash utility and it is now supporting Navi based Radeon RX 5700 Series GPUs.  So I downloaded it and gave it a go.

One of the biggest hindrances on the Radeon RX 5700's potential was the artificial limit that AMD put on it to limit the clock speeds and this was what I was mostly hoping to get around as it's what made the Vega 56 so much more potent with the Vega 64 vBIOS.  Before we go any further I'm not condoning or telling anyone they should do this, if you decide to do this it'll be completely on you if you mess anything up as these types of things do carry a risk  To do this simple flash you'll want to download the ATIFlash Utility from TechPowerUp along with the proper vBIOS from a Radeon RX 5700XT.  I simply used GPU-z to make a copy of my Radeon RX 5700XT's vBIOS to use for the flash. 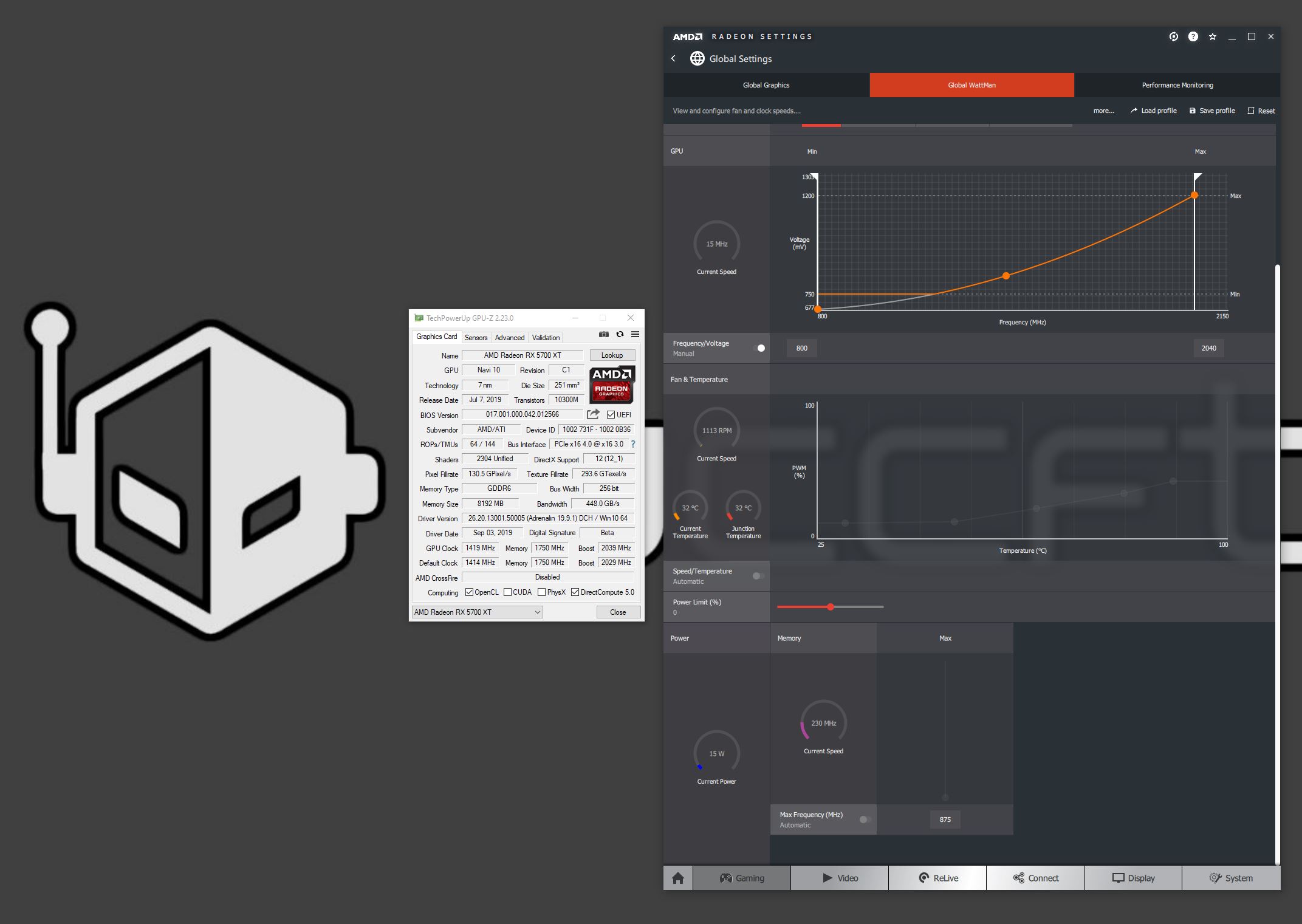 Once I flashed the new RX 5700XT vBIOS onto my reference RX 5700 it was time to check Wattman to see if I was still limited, and to my pleasure, the limits were gone! I still only had the 2304 Stream Processors as before so just like with the Vega 56 they're hardware limited and not able to be fully unlocked.  Another note is that there are no issues with the driver loading from altering the vBIOS  But, now the card is operating at the stock clocks of the full-fat Radeon RX 5700XT and that resulted in the clock speeds settling around 1850MHz under load while gaming and pushing the Power Limit to +20% I saw the bar move on up to 1950+MHz and all the while being fully stable.  I was unable to reach this level of performance using the Soft Power Play Table mods on the RX 5700 back when I first got it and find this to be a much easier and more preferred way of doing this.  I've added in some performance, thermal, and power figures below for those curious how it stacked up in various situations compared to the stock RX 5700 and the RX 5700XT.  In the graphs below the RX 5700 OC is running with the slider for the clock speed set to 1850MHz and the Power Limit to +20, both as far as they are allowed to go but the memory is a pig on this one and isn't stable with any overclock.