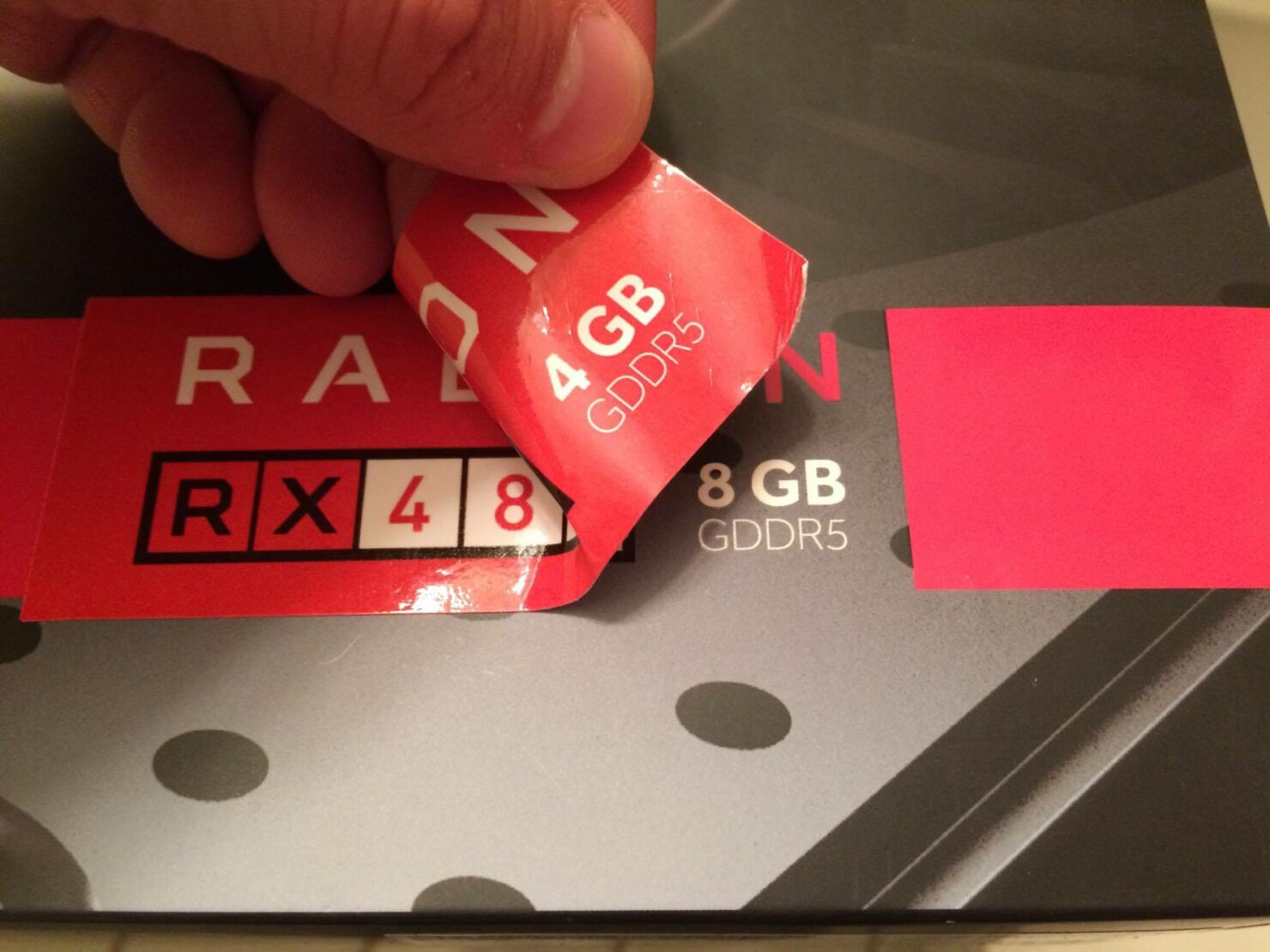 All early retail RX 480 4GB cards are actually rebadged RX 480 8GB models with a 4GB sticker slapped on the box. We were able to confirm this on our very own retail XFX RX 480 4GB card that we bought from newegg. Following our discovery a couple of days ago of 8GB Samsung GDDR5 memory chips on the PCB of our card we decided to look more into it. As it turns out our RX 480 4GB card wasn't only an 8GB card but the actual box said 8GB on it. All be it with an RX 480 4GB badge plastered on.

Yesterday we were to flash our RX 480 4GB sample to unlock all 8 gigabytes of GDDR5 memory on the card. Not only that, but as an added bonus the BIOS effectively flashed our RX 480 4GB card to XFX's RX 480 8GB Black Edition so the clock speed got a boost as well. We fired up a few games to test the card after the BIOS flash and confirmed that indeed all 8GB of memory was unlocked and usable in-game.

Retail AMD RX 480 4GB Cards Have 8GB Of Memory, Can Easily Be Flashed Back To 8GB

A couple of days ago we heard that AMD RX 480 4GB retail units actually have 8GB and it's unlockable via a BIOS update. Something that we've been able to confirm on our own RX 480 4GB card. We published a review of the 4GB RX 480 which showed some surprising results. We will follow up with more benchmarks now that we have successfully flashed it to unlock all eight gigabytes of memory on the board.

Our particular XFX RX 480 4GB sample can still be found on newegg but there's no guarantee that you will get an 8GB card if you order now. However if you have already bought an RX 480 4GB model there's a very good chance it's actually an 8GB card that was sold as a 4GB unit. By rebadging 8GB RX 480 cards and selling them as 4GB units AMD is effectively paying $30 out of pocket for each one sold.

However, the theory goes that AMD wanted to make sure that the RX 480 was available at launch for the advertised MSRP of $199. All the while supply of the lower density memory chips for the 4GB variant were still ramping. Instead of forcing potential buyers to wait, AMD is essentially selling RX 480 8GB cards at a cut price to stay true to its word. While this is good news for consumers it means that AMD is effectively taking a $30 loss on each of these units. And it will continue until actual 4GB RX 480 cards begin to ship.

Our XFX RX 480 4GB Is Now A Factory Overclocked 8GB Card, Here's How You Can Do It Too

After taking our RX 480 apart to look at what type of memory chips it had a few days ago we know that there was 8 gigabyte of memory on the board. So it was merely a question of waiting until the 8GB BIOS makes it to the web so we can attempt to flash our card. The BIOS file did make its way to the web yesterday and our attempt was a resounding success.

Reference RX 480 cards do not come with a BIOS switch. So please exercise a healthy level of caution when attempting this. As a failed BIOS flash can effectively render the card completely non-functional. Although to help you along on your journey to a free upgrade to 8GB our own US Editor Keith May has published a how-to guide that I would highly recommend that you follow.

One final tip courtesy of our own Keith May if you attempt to do this on your own. When flashing your RX 480 DO NOT use GPU-Z to back-up the BIOS file. If you do so it will result in a corrupt 128kb file and not the full 512kb BIOS file that you're looking for. So instead make sure to use TPU's ATIwinFLASH utility to properly backup your BIOS.

Please remember, if your card doesn't have 8GB of memory to begin with there won't be any memory to unlock. So before attempting any of this please make sure to inspect your card and confirm that it actually has 8GB of memory. Otherwise you may risk damaging your card by flashing it with an incompatible BIOS.