It's confirmed, folks. Google has just sent out the invites for its event where it will release Android 6.0 Marshmallow, and of course, the new Nexus devices and the 2nd Gen Chromecast.

Join us for some tasty new treats and much s'more 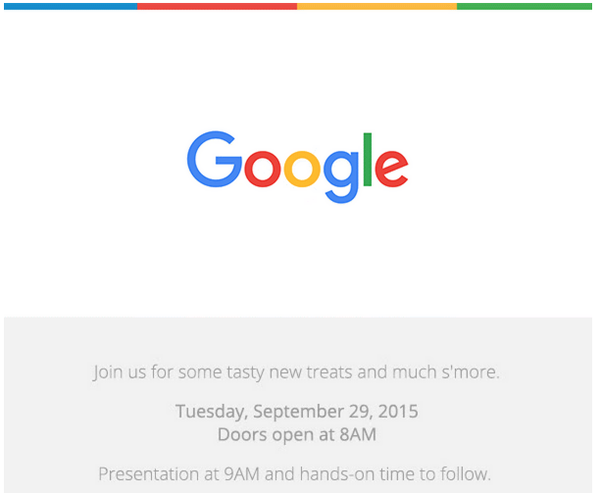 The event will be held in San Franciso on September 29, starting at 9 am. Expect to see two new Nexus smartphones, which have seen several new leaks in the past two weeks. The two new Nexus flagships are reportedly being made by LG and Huawei. LG is calling its device the Nexus 5X, according to the leaks, while the Huawei model will be called the Nexus 6P.

Coming to Android 6.0 Marshmallow, the upcoming operating system will be an incremental update focusing largely on bug fixing, battery optimization and other feature enhancements. Some of the expected features include app permissions, mobile payments, standardized support for fingerprint sensors tied to Android Pay mobile payment system, new battery features like the Doze mode which promises twice the normal battery life, and much more.

Additionally, Google will also reveal a second generation of its Chromecast device which plugs directly into your TV and lets you stream content from services like Netflix. The new Chromecast will be unveiled alongside a Chromecast audio device. The 2nd Gen Chromecast will introduce new features, including feeds for device's main screen, "Fast Play", and improved WiFi, according to 9to5Google. Chromecast will launch in at least 10 countries at first and is expected to be priced similar to the first generation model.