AMD will be announcing their next-generation Ryzen Threadripper 3000 series processors this week on 7th November, reports Videocardz. The report also includes all of the embargo dates which were set by AMD for their upcoming 3rd Gen Threadripper lineup.

Once again, Intel tried to offer their best but couldn't keep up with the core count that AMD managed to deliver. Intel only managed to offer a 28 core and 56 thread chip known as the W-3175X. But once again, AMD won not only the core count war but the pricing war too since their 32 core chip was priced $1000 less compared to Intel's flagship part. 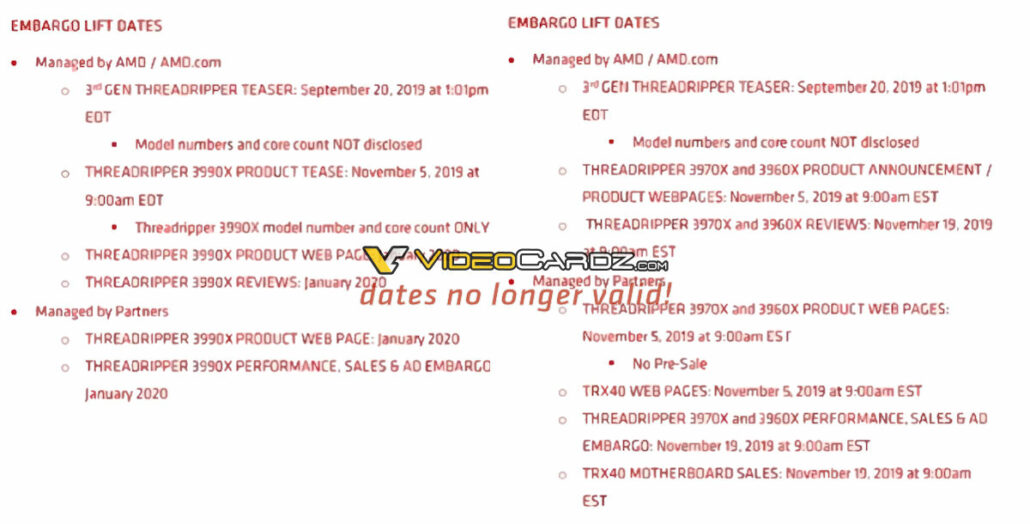 Now, AMD will be releasing their 3rd installment of the Ryzen Threadripper family. One which will offer stunning core counts of up to 64 cores and 128 threads along with 256 MB of cache and 128 PCIe Gen 4.0 lanes. But for those waiting for these high-end desktop processors, there's a little delay which I am sure most of you can manage since you have already waited a year since the last release.

According to Videocardz, the 3rd Gen AMD Ryzen Threadripper processors were originally planned to be announced today but that has changed. The latest announcement plans are now scheduled for the 7th of November which is this Thursday. The actual sales embargo is planned to lift at least two weeks later between 19th-25th November. This is around the same time Intel would also intro and launch their 10th Gen X-series processors which are aiming to deliver competitive pricing this time against AMD's lineup.