AMD’s next generation “Arctic Islands” family of Radeon 400 series is one that many gamers have been eagerly awaiting for so long, as it represents the first major generational leap in performance and efficiency since the introduction of the HD 7000 series in January of 2012. This is because it's the very first generation of Radeon graphics chips to feature next generation FinFETs, rather than the aging 28nm process that spans everything from the 300 series, Fury series and Nvidia's 900 series .

The Arctic Islands family of GPUs has been subject to numerous leaks in the past, unfortunately none of which had any information about when they were actually going to be released. There hasn't been any reliable information about Arctic Islands' release timeframe, that is until today. We have confirmed that the company is planning to introduce its next generation 14nm / 16nm family of graphics cards throughout the summer of 2016 and into the back to school season. The launch is still too far out to make out any specific details and we have yet to confirm what the new series will actually be called, so we're going to use "400 series" as placeholder until then.

This goes hand-in-hand with what he had exclusively reported last month about AMD successfully completing the design of several “Arctic Islands” R 400 series GPUs which have been taped out and are on track to begin mass production.  TSMC's 16FF+ process is already in volume production at mature yields, with additional capacity and mass production expected by next year as both Nvidia and AMD ramp-up their next generation 16nm products. All in all the company expects to triple its 16nm capacity by the end of next year.

AMD's President and CEO Lisa Su confirmed this past October the company's plans to update the entire graphics line-up over “the coming quarters” with a new set of products that have “2X the performance per watt” of the current Radeon R9 Fury and 300 series of graphics cards. And as mentioned earlier we've managed to confirm exactly when AMD is planning to launch its new family of GPUs, beyond Lisa Su's broad statement at last quarter's earnings teleconference, and it'll be in the summer of next year.

We are also focused on delivering our next-generation GPUs in 2016 designed to improve performance per watt by 2X compared to our current offerings, based on design architectural enhancements, as well as advanced FinFET process technology. 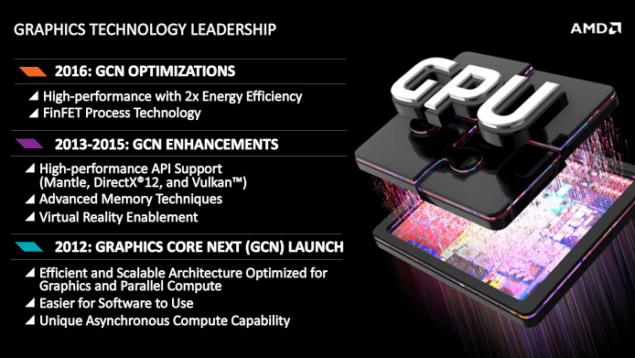 Despite the existence of three+ different iterations of GCN, namely GCN 1.0 ( HD 7000 series ) , GCN 1.1 ( R9 290 series) , GCN 1.2 ( R9 285 and 380) and Fiji ( R9 Fury X, R9 Fury and R9 Nano) which is based on an updated GCN 1.2 design; according to AMD’s Chief Technology Officer Mark Papermaster AMD only recognizes having introduced two main generations of GCN so far. With the next major iteration to come out next year in the form of the “Arctic Islands” family of graphics chips.

Arctic Islands will feature three major improvements over AMD’s current current R 300 series and Fury series line-up. These include second generation HBM, next generation "Arctic Islands" GCN architecture as well as a more advanced 14/16nm FinFET manufacturing process. The three of which mean that for the first time since 2012 we're going to get a truly next generation family of GPUs, with performance and power efficiency levels that vastly exceed what we see today from the 28nm 300 series and Fury series.

At 1 Terabyte/s of memory bandwidth HBM 2.0 offers double the bandwidth of HBM 1.0 found in the R9 Fury X which features a 4096bit memory interface, 4GB of VRAM and a total of 512GB/s of bandwidth. The flagship GPU in the Arctic Islands family has been numerously purported as “Greenland“. Which is set to be AMD’s most powerful and most advanced graphics chip to date. Greenland is rumored to feature up to 18 billion transistors and 32GB of second generation HBM with 1TB/s of memory bandwidth. Making it the largest ever graphics engine conceived by the company, at approximately twice the transistor count of AMD’s current flagship code named “Fiji” powering the Fury series of Radeon graphics cards.

AMD’s chief technology officer, Mark Papermaster, announced last month that AMD will in fact be leveraging Globalfoundries' 14LPP process for CPU, APU and GPU products. Which was a very interesting development to say the least as It was confirmed back in August that AMD is also in fact one of TSMC’s clients for the 16nm node. The very same process that Nvidia had officially confirmed earlier in the year that it will be using for its next generation Pascal GPUs in 2016.

FinFET technology is expected to play a critical foundational role across multiple AMD product lines, starting in 2016, GLOBALFOUNDRIES has worked tirelessly to reach this key milestone on its 14LPP process. We look forward to GLOBALFOUNDRIES’ continued progress towards full production readiness and expect to leverage the advanced 14LPP  process technology across a broad set of our CPU, APU, and GPU products. - Press Release

From a historical point view, every one of AMD's graphics product launches on a next generation manufacturing process in the current and past two decades was delivered on a TSMC process node. Now that we have official confirmation that AMD will be building FinFET GPUs at both TSMC and Globalfoundries next year it’s going to be a fascinating spectacle to see which GPUs would debut on which process and why AMD decided to go against its tradition and partner with both foundries for its next generation Arctic Islands GPUs.

14LPE is the early access “low power” version of the common Samsung/Globalfoudnries 14nm FinFET process, while 14LPP is the second generation, high performance variant that is set to succeed 14LPE. Despite its name, 14LPP should deliver better performance as well as lower power consumption, the only caveat being its later availability.

14nm FinFET will offer GPU design engineers nearly double transistors to play with in the same area as the current 28nm process. 14nm FinFET also has significantly faster switching speeds, which will translate to significantly higher clock speeds compared to current 28nm based GPUs. This is all in addition to the drastic power savings enabled by the smaller feature sizes and the move from planar to FinFET gates.

It will be interesting to see how things play out next year with Nvidia’s Pascal GPUs which will also be produced on TSMC’s 16nm FinFET process and feature second generation High Bandwidth Memory.  How much exactly  Pascal and Arctic Islands GPUs are going to cost will depend almost entirely on the production yields and volumes of the leading edge FinFET node next year. But so far this is shaping up to be one of the biggest performance and power efficiency boosts we’re going to see from a new generation of graphics cards in a long while.