Globalfoundries confirmed today that they have successfully qualified the 14LPP process and delivered working 14nm product samples to AMD. Both companies confirmed via a release issued to the press today that AMD will be introducing CPU, APU and GPU products next year based on Globalfoundries' "most advanced 14nm FinFET process technology" dubbed 14LPP.

Santa Clara, Calif., November 5, 2015 -- GLOBALFOUNDRIES today announced it has demonstrated silicon success on the first AMD (NASDAQ:AMD) products using GLOBALFOUNDRIES’ most advanced 14nm FinFET process technology. As a result of this milestone, GLOBALFOUNDRIES’ silicon-proven technology is planned to be integrated into multiple AMD products that address the growing need for high-performance, power-efficient compute and graphics technologies across a broad set of applications, from personal computers to data centers to immersive computing devices.

We exclusively reported two weeks ago that AMD had successfully completed the design of several "Arctic Islands" R 400 series GPUs which have been taped out and will enter mass production next year. AMD had also officially confirmed that it will be updating its entire graphics line-up with next generation graphics products based on advanced FinFET process technology in the coming quarters.

On the CPU side we've managed to confirm that both of AMD's next generation high performance x86 and ARM64bit CPU cores, code named "Zen" and "K12" have also successfully completed the design phase and reached tape out and are on track for availability next year and in 2017 respectively. Only five days ago we have also heard a whisper about AMD's hotly anticipated Zen CPU core meeting "all expectation" in testing with no "significant bottlenecks" being found.

Globalfoundries' and AMD's joint announcement today affirms all what we've been hearing over the past several weeks and months. The announcement also goes hand in hand with what I had said in my op-ed back in September about Globalfoundries' 14LPP process being on time for AMD's next generation Zen based products.

GLOBALFOUNDRIES’ 14LPP FinFET is ramping with production-ready yields and excellent model-to-hardware correlation at its Fab 8 facility in New York. In January, the early-access version of the technology (14LPE) was successfully qualified for volume production, while achieving yield targets on lead customer products. The performance-enhanced version of the technology (14LPP) was qualified in the third quarter of 2015, with the early ramp occurring in the fourth quarter of 2015 and full-scale production set for 2016.

According to the joint announcement today, 14LPP is in excellent shape. With yields already hitting "production-ready" thresholds. Meaning that the only thing left for 14LPP to enter volume production is for total capacity to meet demand. Which should occur sometime in 2016 as the process continues its ramp-up, which has been kicked off in Q4 of this year.

14LPE is the early access “low power” version of the common Samsung/Globalfoudnries 14nm FinFET process. While 14LPP is the second generation, high performance variant that is set to succeed 14LPE. Despite its name, 14LPP should deliver better performance as well as lower power consumption, the only caveat being its later availability. 14nm FinFET will offer engineers nearly double transistors to play with in the same area as the current 28nm process. 14nm FinFET also has significantly faster switching speeds, which will translate to significantly higher clock speeds compared to current 28nm based GPUs. This is all in addition to the drastic power savings enabled by the smaller feature sizes and the move from planar to FinFET gates.

Today’s announcement represents another significant milestone towards reaching full production readiness of GLOBALFOUNDRIES’ 14LPP process technology, which will reach high-volume production in 2016. The 14LPP platform taps the benefits of three-dimensional, fully-depleted FinFET transistors to enable customers like AMD to deliver more processing power in a smaller footprint for applications that demand the ultimate in performance.

FinFET technology is expected to play a critical foundational role across multiple AMD product lines, starting in 2016, GLOBALFOUNDRIES has worked tirelessly to reach this key milestone on its 14LPP process. We look forward to GLOBALFOUNDRIES' continued progress towards full production readiness and expect to leverage the advanced 14LPP  process technology across a broad set of our CPU, APU, and GPU products.

AMD's chief technology officer, Mark Papermaster, confirmed that AMD will in fact be leveraging the 14LPP process for CPU, APU and GPU products. This official confirmation is a very interesting development as AMD is also a confirmed partner of TSMC's for its 16FF process. The very same process that Nvidia had officially confirmed earlier in the year that it will be using for its next generation Pascal GPUs in 2016.

From a historical point view, every single AMD graphics product debut on a next generation manufacturing process was delivered on a TSMC process node. With official confirmations of AMD building FinFET GPUs at both TSMC and Globalfoundries next year it's going to be a fascinating spectacle to see which GPUs would debut on which process and why AMD decided to go against its tradition and partner with both foundries for its next generation Arctic Islands GPUs.

Our 14nm FinFET technology is among the most advanced in the industry, offering an ideal solution for demanding high-volume, high-performance, and power-efficient designs with the best die size. Through our close design-technology partnership with AMD, we can help them deliver products with a performance boost over 28nm technology, while maintaining a superior power footprint and providing a true cost advantage due to significant area scaling.

What We Know So Far About AMD’s Zen Microarchitecture

We first broke the news about AMD’s next generation high performance core back in September of last year. At which point AMD’s then CEO Rory Read revealed the code name for the company’s upcoming high performance x86 CPU microarchitecture. Prior to that revelation we only had knowledge of Zen’s sister ARMv8 core code named K12.

As of late AMD has been slightly more generous in providing detail about its brand new inception. Back in May AMD announced that it was preparing an entirely new line-up of FX CPUs and a brand new platform ‘AM4″. We learned that the new family of FX processors code named “Summit Ridge” would feature an entirely new socket and an updated feature set including DDR4 memory support. And more importantly we learned that the new platform would feature mainstream CPUs with “high core counts” – rumored to be up to eight cores – and “SMT” support.

Two months later we learned that AMD was also working on a monstrous High Performance Computing APU with 16 Zen cores and a huge integrated GPU in addition to stacked High Bandwidth Memory. We also learned that AMD is planning to introduce high performance server CPUs with up to 32 Zen CPU cores. Hearing about all of those different SKUs is jolly exciting but it was also quite frustrating as we had no idea what to expect from Zen. That is until AMD revealed a whopper at its Financial Analyst Day earlier this year, which is that Zen will have a 40% instruction per clock improvement over its predecessor “Excavator”.

In addition to SMT, Zen also features a new high-bandwidth low latency cache system. A vital improvement over the previous generation of cores. Since subpar cache performance was one of the primary pitfalls of AMD’s Bulldozer CPU microarchitecture. The new CPU core is designed for and will be manufactured on an advanced FinFET process. Which would allow the CPU core to scale from low power mobile applications to high performance desktop and enterprise markets.

Zen To Feature A 40% Instructions Per Clock Improvement Over Excavator

Mark Papermaster, AMD’s Chief Technology Officer revealed that the company plans to introduce a huge IPC improvement with Zen over AMD’s latest generation “Excavator” x86 core. A 40% increase in IPC would represent the largest jump in IPC ever for the company, an improvement which Mark Papermaster claimed he had not seen “anywhere in the industry”.

Zen will be featured in AMD’s enthusiast CPU product line in 2016. Lisa Su confirmed that the new CPU architecture will be arriving to desktop FX CPUs first and to servers second. Succeeding Zen will be Zen+ cores. Which will feature evolutionary improvement over Zen. The company will introduce a new socket in 2016 dubbed AM4 that will house products spanning from high performance CPUs to mainstream APUs based on Zen and next generation FinFET GCN based GPUs.

The new family of high performance FX CPUs which appeared in previous leaks as “Summit Ridge” will feature SMT CPUs with high core counts and DDR4 memory support. The platform will be based on the new AM4 socket and a new yet undisclosed chipset. Unconfirmed leaks indicate that Summit Ridge will feature CPUs with up to 8 Zen cores and 12MB of L2 and L3 cache, but that is yet to be confirmed.

We had previously detailed AMD’s plans to update the entire graphics line-up over “the coming quarters” with a new set of products that have “2X the performance per watt” of AMD’s current GPUs.

Lisa Su – Advanced Micro Devices, Inc. – President, CEO – Q3 2015 Earnings Teleconference
I think it’s also fair to say that the graphics portfolio is quite broad, and so you will see us updating the entire portfolio over the coming quarters,

Lisa Su – Advanced Micro Devices, Inc. – President, CEO – Q3 2015 Earnings Teleconference
We are also focused on delivering our next-generation GPUs in 2016 designed to improve performance per watt by 2X compared to our current offerings, based on design architectural enhancements, as well as advanced FinFET process technology.

Despite the existence of three+ different iterations of GCN namely GCN 1.0 ( HD 7000 series ) , GCN 1.1 ( R9 290 series) , GCN 1.2 ( R9 285 and 380) and Fiji ( R9 Fury X, R9 Fury and R9 Nano) which is based on an updated GCN 1.2 design; according to AMD’s Chief Technology Officer Mark Papermaster there have only been two generations of GCN so far. With the next major iteration – 3rd generation – coming next year in the form of the “Arctic Islands” family of graphics chips.

Arctic Islands will feature three major improvements over AMD’s current current R 300 series and Fury series line-up. These include second generation HBM, next generation GCN architecture as well as a more advanced 14/16nm FinFET manufacturing process. The three of which will define the performance and power efficiency characteristics of the Arctic Islands family.

This graphics architecture will power everything from next generation mobile and desktop GPUs to APUs and semi-custom chips. There’s also strong evidence to suggest that Nindendo’s next generation gaming device “Nintendo NX” – which is coming next year – will be powered by an AMD semi-custom SOC. Making it a very likely candidate to feature AMD’s 3rd generation “Arctic Islands” GCN architecture. 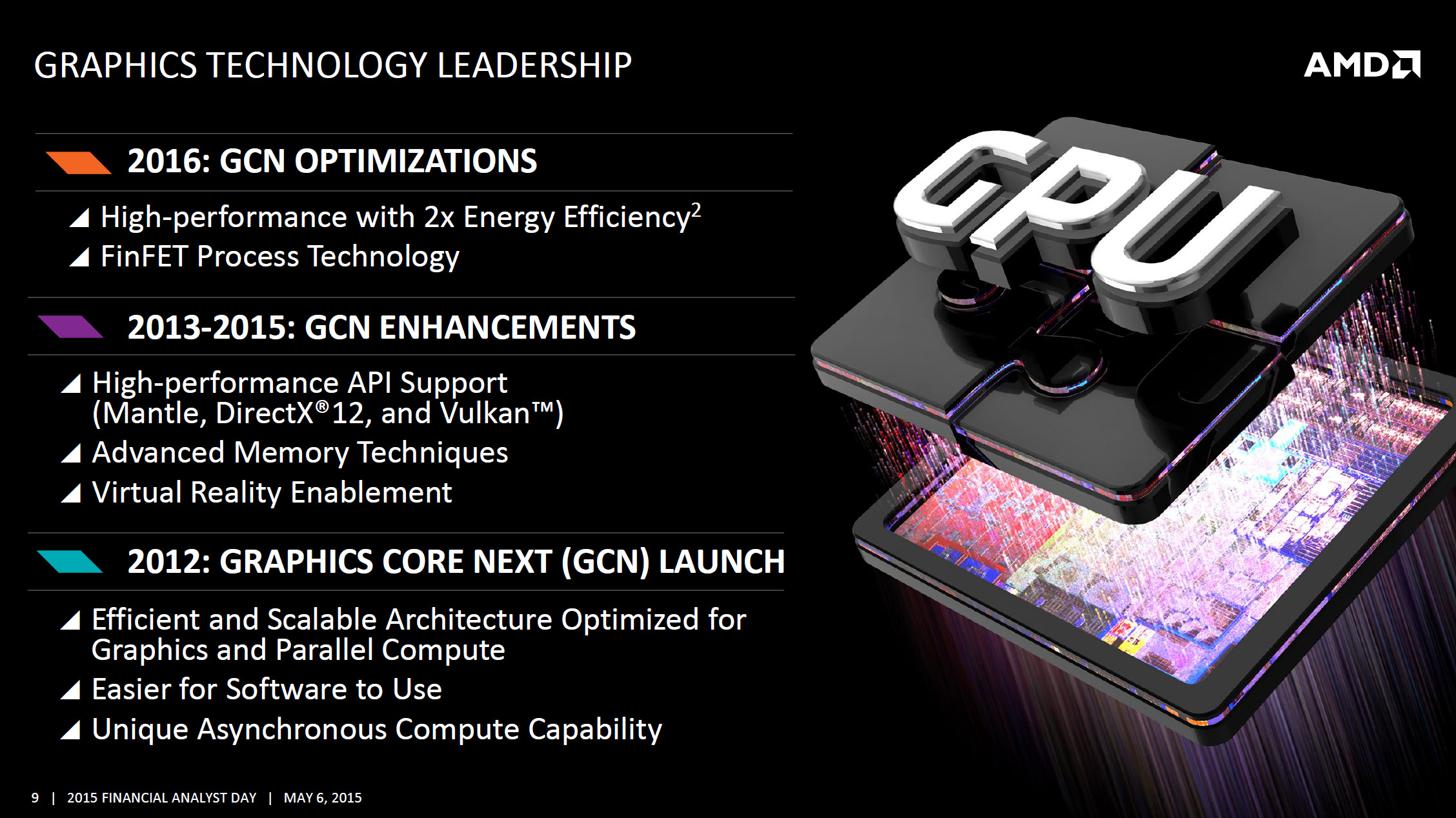 The flagship GPU in the family has been numerously purported as “Greenland“. Which is set to be AMD’s most powerful and most advanced graphics chip to date. Greenland is rumored to feature up to 18 billion transistors and 32GB of second generation HBM with 1TB/s of memory bandwidth. Making it the largest ever graphics engine conceived by the company, at approximately twice the transistor count of AMD’s current flagship code named “Fiji” powering the Fury series of Radeon graphics cards.

The graphics market is going to be a fascinating one next year with the introduction of truly next generation GPUs from both AMD and Nvidia. Along with the Arctic Islands from AMD,  Nvidia’s Pascal is also set to debut next year. Nvidia confirmed that Pascal will be produce on TSMC’s 16nm FinFET process and will also feature second generation High Bandwidth Memory like AMD's Arctic Islands.  When exactly we can see Pascal and Arctic Islands GPUs in the market and how much they’re going to cost will be almost entirely up to production yields and volumes of FinFET process technology next year. But so far this is shaping up to be one of the biggest performance and power efficiency boosts we’re going to see from a new generation of graphics cards in a very long while.