In mid-February, NVIDIA described the Ethereum hash rate limiter as "a secure handshake between the driver, the RTX 3060 silicon, and the BIOS". That simply isn't the case as there have been many instances of Ethereum mining on the RTX 3060 whether it be the accidental 470.05 driver, dummy HDMIs, or BIOS mods.

The latest instance of cryptocurrency miners cracking the Ethereum hash rate limiter is a miner who posted his rig on QuasarZone running 7 NVIDIA GeForce RTX 3060s. Since the accidental driver only allowed for mining on a single 3060, the miner was able to do bypass the hash rate limiter with dummy HDMI plugs and a PCIe riser. The dummy HDMI plug functions by tricking the driver into sending a display signal to the monitor which did not exist. There was one more issue the miner had to overcome before being able to mine on the RTX 3060. 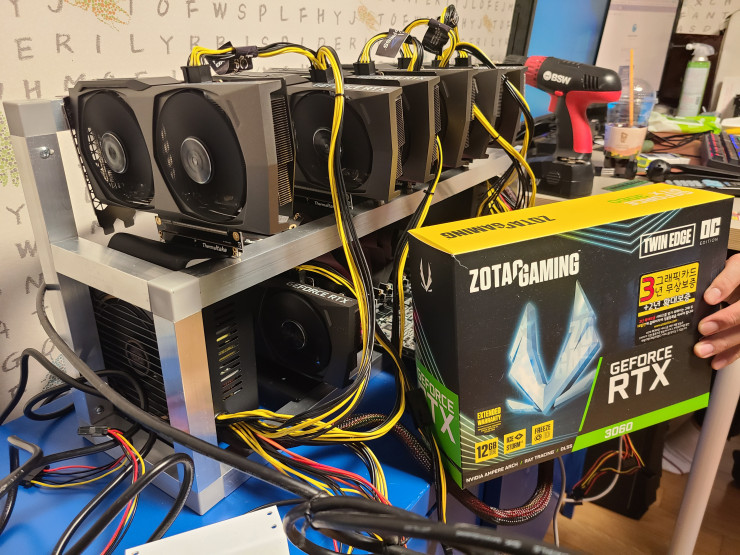 Even with the dummy HDMI plugs, the hash rate limiter would still work if the card was directly plugged into the PCIe slot. The solution was to use PCIe risers to solve the issue. Using the PCIe risers and dummy HDMI plugs, the user is able to mine on multiple RTX 3060s. The miner did not go into much detail about how he managed to enable PCIe riser support but did mention that it only works for a single motherboard.

The entire rig is fully functional with all 7 RTX 3060s mining at full capacity which uses about 1020W of power. The 50 MH/s allows the miner to generate $32 a day with power costs included and will recoup his investment in approximately 105 days assuming that he paid the MSRP for the Zotac Gaming GeForce RTX 3060 Twin Edge OC 12GB which is $479.99. It is unlikely that all of the cards were purchased at the MSRP price, but anything is possible since miners have been able to get their hands on cards before the launch.