According to the news outlet, no driver or BIOS modifications are required to bypass the hash rate limit and the process is actually very simple. The news outlet hasn't provided more information on this but we believe that they have avoided doing so for good reason. But knowing the tech industry and how fast things circulate here, the whole procedure would end up on various crypto forums & blogs in the coming days.

As a confirmation, the news outlet has posted a picture of the NVIDIA GeForce RTX 3060 mining Ethereum cryptocurrency using the Daggerhashimoto algorithm (T-REX) and delivering a total of around 50 MH/s. A single GPU was used which had an average power consumption of 110 Watt with fans set to 70% and the temperatures averaging around 33C (Degrees). The ETH Cryptomining algorithm was left running for 8 minutes which confirms that the limit has indeed been bypassed as earlier rumors only had the GPU running for less than 5 minutes which isn't enough time for the hash rate limiter to kick in.

Other users are also posting their own NVIDIA GeForce RTX 3060 Ethereum mining results which have been kept on running for hours.

RTX 3060 is not hashrate restricted on ETHASH with developer driver 470.05.

In my rig right now driver version 470.05 does very well in a "game" called T-REX (Crypto coin mining client) bypassing the lock on RTX 3060 and achieving 46 MH/s on ETHASH.

I will monitor to see if this hodls... 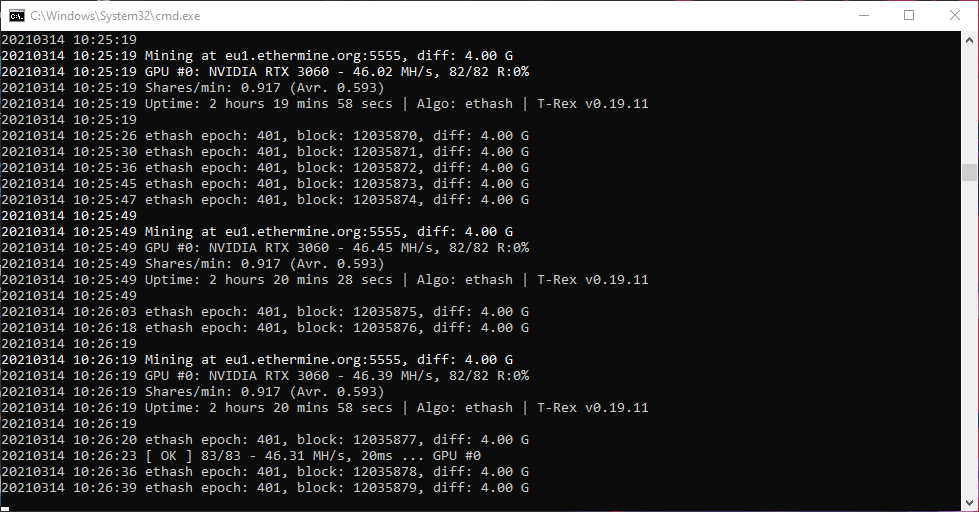 UPDATE: Still at 46 MH/s after 6 hours.
UPDATE: Screenshot added below. I can tune the card to get around 50 MH/s. (Power 127W, Core +50, Memory +1500)
EDIT: For clarity: Mining ETH crypto coin. Added GPU-Z Validation with BIOS and Driver details. Uploaded BIOS to TechPowerUp and added download link.

The NVIDIA GeForce RTX 3060 launched last month and while it was available in slightly better quantities than the rest of the RTX 30 series lineup, this news won't be good for a long-standing supply of the graphics card. Once again, this will result in an imminent shortage of the only mainstream GeForce RTX 30 series gaming graphics card in the market and several people are reporting that they are expecting a large hike in prices given the demand for the RTX 3060 graphics card after this mod rolls out in public.

Graphics cards such as the unreleased NVIDIA GeForce RTX 3080 Ti are also expected to feature the hash rate limit but if modders can bypass the RTX 3060, it's sad to say that the limit will also be bypass on the RTX 3080 Ti too.