Microsoft released Windows 10 PC Preview build 11102 last night, bringing in a new feature for Microsoft Edge and a bunch of known issues. Some of the testers were annoyed by the fact they received more new bugs than the new features and took over to Twitter to complain to Gabe Aul. Gabe has shared that a surprising number of 1200 changes have been made between the new build and the build 11099 of the last week. 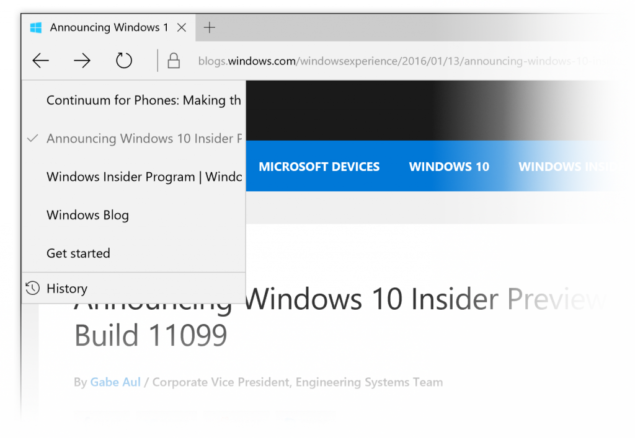 The increment between Insider Preview build 11099 and 11102 seems pretty small but it has managed to bring in 1200 changes in the operating system. The new build brought in only one new "visible" feature, the ability to right-click on the back and forward buttons in the Edge browser. While this feature has been present in other browsers for several years, the feature was one of the top requested for Microsoft's Edge.

Looking at this one visible feature and a ton of known issues, some of the testers felt a little cheated. However, Microsoft had promised to accelerate the number of preview builds starting from January this year at the cost of more bugs getting undetected by the internal team. Gabe Aul had also clearly mentioned that the increased frequency of builds means more bugs and fewer new features. He had further advised Insider program members to switch to the Slow ring to avoid tackling with more bugs than the features.

Microsoft has been reported to currently focusing on improving the underlying structure of the OS before moving forward to any UX changes. Gabe had promised that Insiders will start seeing visible changes in the "next few builds."

@socialwill Most of that work is complete at this point. Still mostly working on platform changes, so expect little new UX in new few builds

Gabe Aul is himself only four versions ahead of the latest Insider build, meaning the gap between the testers on the Fast ring and Microsoft's internal development team is quite close. While there may be nothing new with the new Windows 10 PC Preview build 11102, 1200 sounds like a lot of changes for an incremental build. But as Gabe tweeted, "this is OS development."

- Microsoft outlines how to easily port iOS apps to Windows 10