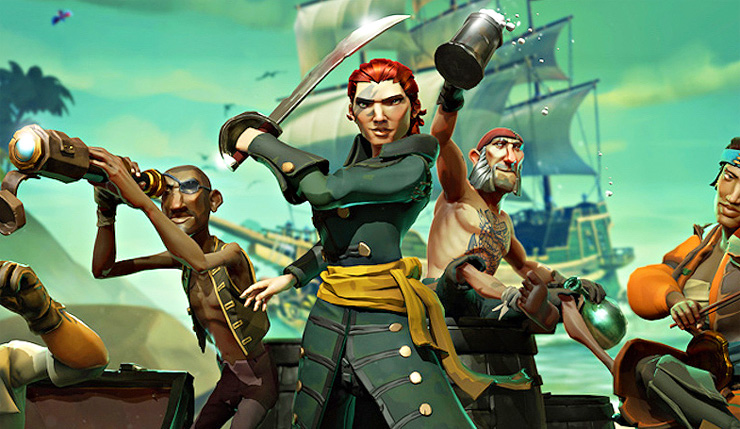 As reported earlier today, Sea of Thieves finally got a release date during The Game Awards 2017. Wannabe pirates will be able to start sailing the virtual Seven Seas on March 20th, 2018.

That said, Rare, knowing that so many fans are still wondering exactly what they'll be doing in Sea of Thieves, decided to drop a metric ton of information on the official website over several separate pages. We've compiled everything for easier reading below; while some information was already known, there's plenty of new tidbits and as a whole, it paints a much clearer picture than we've ever had before.

Just brace for what will be a lengthy read.

A WORLD OF TEAMWORK

Co-operation is your watchword in Sea of Thieves. The events you experience and the memories you make become the stuff of legend with friends in tow. Bring a ready-made crew or discover new partners in plunder, bonding under the Pirates' Code. Prefer to sail solo as you earn your sea legs? You can do that too!

Every ship that comes coasting over the horizon in Sea of Thieves, large or small, is crewed by real players on their own voyages, so it's up to you how you interact and what kind of crew you choose to be. Create allies or enemies, be benefactors or betrayers, exchange banter or broadsides – you make the call! Of course, what you can't know in advance is how other ships' crews might have reacted upon seeing you...

Chatting and calling out bearings and tactics is the most efficient way to coordinate with crewmates. But if that's not for you, Sea of Thieves' non-verbal communication system has you covered with a spread of easily accessible phrases and gestures. Your opinions count in other ways too: when voting on which voyage to undertake next, and when deciding whether or not to punish troublemakers with a stint in the brig.

Being a pirate means you're bound to butt heads with a few rival crews, whether it's over treasure theft or any of the other whims of a seafaring scoundrel. But in the forgiving spirit of Sea of Thieves, try setting aside arguments over a grog or six when you meet again at the tavern. Being sick on your former foes can certainly break the ice. Or just bust out the concertinas and hurdy-gurdies to come together in hearty shanty harmony!

Appropriately for an outing with an emphasis on playing together (supporting both cross play and Xbox Play Anywhere), Sea of Thieves is created in lockstep with the community. Channels have sprung up to help find the perfect crew while feature feedback floods in from the Insider Programme and beyond, so if there's something you're desperate to see or do on the Sea of Thieves, it may well be on the way! Launch day is just the beginning...

A WORLD OF LEGENDS

Forge your own identity and set out to rack up renown

You'll begin your journey across the Sea of Thieves as a ragtag wanderer ready to complete voyages, form bonds with other pirates and amass your very own hoard. Whether you prefer to sail solo or as part of an adventure-hungry crew, you'll soon find yourself on the way to becoming a stone cold pirate legend.

Before you dive headlong into Sea of Thieves' world, you can pick from a near-limitless supply of possible pirates, ensuring that whatever your preference may be, there's a way to define yourself in-game. The finer details – hairstyles and hooks, accessories and armaments – will fall into place as you play, with everything from the clothes you wear to the weapons you wield helping to express your personality and style.

There's no talking your way to infamy in Sea of Thieves! The only way to build a reputation with the region's Trading Companies is to successfully complete the voyages they offer at outposts. Getting the job done will net you an immediate reward, and the more voyages you vanquish the more you'll rise up through the Company's ranks, taking on trickier tasks, gaining their trust and earning yourself prestigious titles and unique items.

Every Trading Company is unique, as are the opportunities they offer. On one voyage you may be asked to acquire merchant cargo and safeguard it through perilous waters, while another will see you intent on hunting hostiles to claim a bounty. As their names become famed and their status ever more celebrated, well-practised pirates tend to set their sights on an even greater goal: tracking down the fabled Athena's Fortune!

Beyond what's on offer at outposts, the true joy of the pirate life is being able to live it as you see fit. Whether the world comes to know you as a mysterious vigilante, a shipwreck scavenger, a vengeful lone wolf or the life and soul of any tavern, the road to notoriety is yours to travel however you please. Pirates with the most memorable tales may even find their deeds immortalised somewhere out beyond the horizon…

A WORLD OF ENCOUNTERS

The setting of Sea of Thieves is an untamed pirate frontier

Fit to burst with far-flung destinations, inspiring vistas and stirring sunsets, this world is portrayed in a distinctive painterly art style that brings out the best in its roguish residents and most deplorable denizens – not to mention some seriously #GreatWater befitting all kinds of epic high seas adventures.

Fragments of the past

The Sea of Thieves' vast expanse is steeped in myth and legend, filled with curious ruins and outlandish encounters spoken of wherever crews meet to swap their stories. Whether you find yourself witnessing mouldering wrecks in the world's wildest regions or plundering painted shrines beneath sun-dappled jungles, there's a rich history here waiting to be awakened – and within that history, riches waiting to be taken!

As you set out to carve a legacy you're sure to stumble across signs of those who came before you, but be warned: not all of Sea of Thieves' legends are content to linger in the past. Pirates who set sail in search of these deeper, darker secrets may find themselves forced into facing savage Skeleton Captains, the truth behind rumors of gargantuan sea beasts and myriad other dangers lurking beneath the surface of the world…

Not everyone you'll encounter makes their living as a pirate. Alongside the shopkeepers and shipwrights who ply their trades at outposts, you'll find representatives of various Companies ranging from legitimate businesses to secret societies. These Companies have their own reasons for braving the Sea of Thieves and will be only too happy to reward crews willing to undertake dangerous work on their behalf.

Ferry of the Damned

Whether you've taken a close-up look at a shark's insides or toppled off a cliff after one grog too many, you'll find yourself awakening aboard this spectral ship. If the prospect of spending eternity with the recently deceased seems galling, don't worry – the ship's captain may look unsympathetic, but he'll soon return you to the land of the living. Why not pass the time by commiserating with your ghostly fellow passengers? 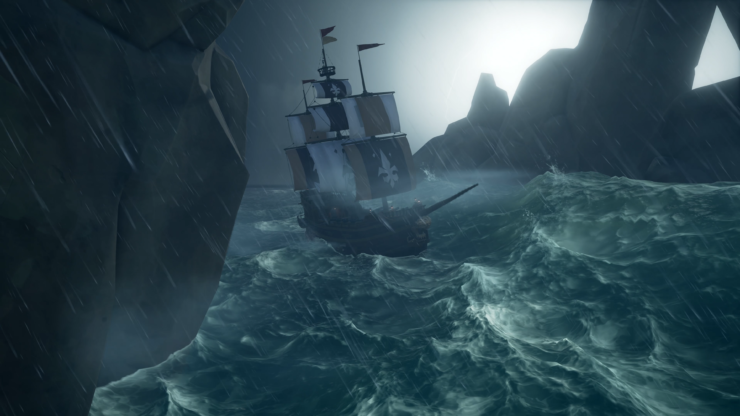 A WORLD OF ACTION

A practical pirate's life is not without its share of dangers.

The sun-drenched shores that dot the horizon may seem tranquil and inviting, but it's never wise to let your guard down for long. Whether or not you choose to seek out confrontation during your adventures, an understanding of what awaits you can mean the difference between treasure and tragedy…

Combat on the waves

When you're fighting over treasure, looking to settle a score or just itching to make a name for yourself, your ship's cannons are a great way to put your rivals in their place – namely, the bottom of the sea. If your own ship's taking a battering from enemy fire, you'll need to decide how best to divide your time and your crew between evasion, repairs and fighting back – not to mention repelling possible boarders!

Weapons at the ready

Learning to handle a cannon is just one way of proving you're a force to be reckoned with. When you're ashore you'll come to rely on a broader arsenal, from the old faithful cutlass to the high-impact blunderbuss, each weapon bringing its own unique quirks and traits to be mastered. Choosing the right weapon for the right situation (and not running out of ammo) will be key to both survival and success on your travels.

Even an experienced pirate thinks twice before sailing into a storm, and with good reason. Not only is visibility reduced, affecting your ability to steer clear of obstacles and hostile ships, but the swelling waves can easily carry you off course. Still, a confident crew can attempt to outpace rivals or evade pursuit by harnessing the elements – although nothing can grant you immunity to the business end of a lightning bolt!

Keep your guard up

Rival crews aren't the only foes you'll encounter on the Sea of Thieves. Many other threats can and will make themselves known on your journey, often when you least expect it. Should you find yourself nose-to-nose with a starving shark, fending off the skeletal mob that's overrun a tumbledown fort or facing down some other unforeseen menace, you'll need to make full use of your wits, weapons and environment to survive. 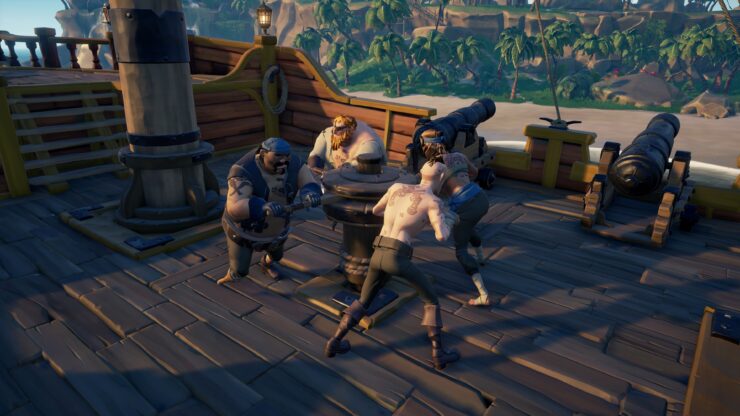 A WORLD OF EXPLORATION

Whatever destiny a traveler on the Sea of Thieves chooses to follow, it begins with exploration. This ever-changing ocean realm is rich in islands, each curled protectively around its secrets, and outposts where hauls are cashed and tankards bashed with friends and strangers alike.

Before leaving the island where your legend begins, you and your crew will need to learn the art of sailing – or at least get confident enough to make each journey a pleasure rather than an undignified series of near-collisions. Crews need to cover steering, navigating, setting the sails and maintaining battle readiness, along with repairing and bailing if things don't go to plan. Successful pirates tend to pick up the basics very quickly...

Treasure isn't often found out in the open (unless dropped by fleeing rivals). Pinpointing hidden loot requires a map, a compass, good instincts and a generous disregard for danger. You can, of course, roam free with no fixed goals, but if you're tracking treasure by map then your search becomes a fully-fledged voyage, sweeping you through different locations and terrain types as you seek lost landmarks and tease out the truth from riddle clues.

Supplies on the side

As you'd expect from a world that attracts fortune-seekers in such numbers, the Sea of Thieves sings with secrets and covert stashes. Shove through the undergrowth to find places off the beaten path or stay alert for seagulls flocking over sunken wrecks and you could reap the rewards: precious resources to top up your food and ammo rations, or beautiful, barnacled hoards of gold that went down with their luckless owners.

When wanderlust can set in at any time, it's good to have options. With a communicative four-person crew, the full-size pirate ship will get you where you need to go with the best balance of offense and defense. But running solo or itching for adventure while your crewmates are preoccupied shouldn't hold you back from exploring coves, caves, foliage and forts when a smaller ship is also at hand, streamlined for just one or two sailors.