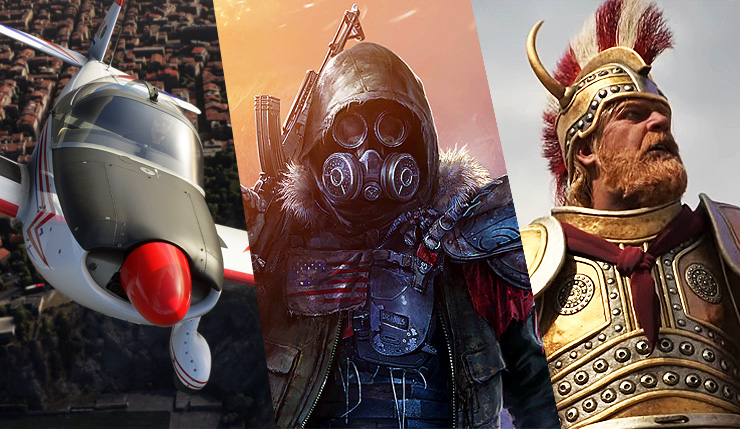 While August lacks any truly huge AAA games, it’s perhaps the busiest month of the year thus far, offering a wide selection of mid-size titles and indies for all tastes. The month’s headliners include Microsoft Flight Simulator, A Total War Saga: Troy, and Wasteland 3, as well as the first of 2020’s big sports games, such as EA Sports UFC 4 and Madden NFL 21. Meanwhile, on the indie front, players will be able to tackle the trippy rhythm extravaganza No Straight Roads, chill island exploration adventure Windbound, and more!

That said, here are the games you should be looking out for in August…

[A Total War Saga: Troy] battles are engaging and smooth, as Total War should be. […] This is a game that interests me more and more, every time I look at it. It does help that this is the first game I've actually played since building my new rig, letting me get the most out of it, giving me a great experience of the new, stylised, visuals and having it run immaculately at the same time.

You can pre-order A Total War Saga: Troy here. The game will be free-to-play for its first day of launch.

It’s been a couple years since players have been able to step into the Octagon, but the leg kicks and arm bars return this month in EA Sports UFC 4. A lot of updates are promised for this year, including a much-expanded career mode with more diverging paths and reworked fight mechanics featuring updated takedowns and greater striking variation. The game’s full roster has yet to be revealed, but expect all the latest stars, as well as some select big names from the world of boxing. Pre-order the game here.

Microsoft Flight Simulator is one of the most technologically ambitious games of the year. The game uses Bing Maps data to create gorgeous ultra-detailed maps of essentially the entire world. If you can point to place on the map, you can fly a plane over it. The game will also feature real-world weather patterns and flight traffic for an extra layer of realism. Microsoft is offering 20 to 30 aircraft and 30 to 30 to 40 “handcrafted” airports at launch, depending on what version of the game you buy, and there will also be a built-in mod marketplace, so expect tons of content to come. Pre-order the game here.

Battletoads is back! Rare’s ultra-difficult brawler franchise has been missing in action for over 25 years, but you can’t keep a good alien toad down. The new Battletoads is being made by relatively unknown developer Dlala Studios under supervision from Rare, and features a more over-the-top cartoony style that past entries in the series. Of course, it’s the gameplay that matters, and Battletoads provides the 3-player co-op brawling you’d expect. Oh, and yes, there are Turbo Tunnel levels. My palms are already sweating in anticipation. Pre-order Battletoads here. The game will also be available through Xbox Game Pass.

Project Cars 3 brings gearheads more super-detailed racing sim action later this month. Developer Slightly Mad Studios is promising a new Career mode featuring over 120 events, revamped controls that will feel better for those playing on traditional controllers, and more. Of course, at its core Project Cars 3 is still all about the cars themselves, with the game offering over 200 rides that can be customized to your heart’s content. Gentlemen, start your engines. Pre-order the game here.

Looking for a game to beat the August heat with? Wasteland 3, which takes the RPG franchise to the frosty mountains of Colorado, may be just the ticket. Once again, here’s Wccftech’s Chris Wray from this hands on Wasteland 3 preview…

Wasteland 3 is quirky, fun and if the writing is good throughout, it will more than likely get you emotionally invested too. […] If there's one thing my time with Wasteland 3 has taught me so far, it's that InXile has pushed forward in branching the game out and that Microsoft has helped to boost the development of the game through their support of InXile.

Pre-order Wasteland 3 here. The game will also be available through Xbox Game Pass.

Fall Guys: Ultimate Knockout could very well end up being the under-the-radar multiplayer hit of the year. Seemingly inspired by shows like Wipeout or The Floor is Lava, Fall Guys gleefully unleashes mayhem by throwing 60 online players into a variety of wacky obstacle courses. The insanity continues until only one player stands tall (good luck with that!) Here’s the Steam page for Fall Guys: Ultimate Knockout.

One of the most interesting-looking games of 2020, No Straight Roads is a unique mashup of action-adventure and rhythm game. Players control Mayday and Luke, who are looking to bring rock back to Vinyl City, which is currently dominated by the EDM Empire. No Straight Roads is bright, vibrant, and its gameplay looks wildly varied, although in all cases, listening and reacting to the game’s kickass soundtrack will be key to your success. This is exactly the kind of upbeat adventure we need here in 2020. Here’s the Epic Games Store page for No Straight Roads.

Windbound is the latest game to try to recapture the sense of adventure and freedom of The Legend of Zelda: The Wind Waker. Windbound casts players as Kara, who find herself lost in the mysterious Forbidden Island. Sail unfriendly seas, hunt, survive, explore, and eventually discover the Forbidden Islands’ secrets. Island getaways are out for most people this year, but this might be the next best thing. Here’s the Steam page for Windbound.

And those are the games you should be keeping an eye on this coming month. What games are you planning to pick up in August? Did I miss anything you’re looking forward to?