An updated Metroid Prime Trilogy Nintendo Switch listing suggests that Nintendo is gearing up to release the trilogy as early as next month.

Back in December of 2018, we reported on a listing for Retro Studios’ trilogy from Swedish retailer Inet, which hinted at an official announcement during the 2018 edition of The Game Awards. Other retailers, including Best Buy also briefly listed it before removing it from its internal systems.

Unfortunately, that announcement never came. Recent rumors suggest that, while it hasn’t been officially announced, Nintendo has long finished porting the trilogy to the Switch but is waiting for the right time to announce it.

Interestingly enough, the above-mentioned Swedish retailer has now updated the trilogy’s listing with a rather unexpected release date. According to the retailer, Metroid Prime Trilogy for the Switch might be releasing on June 19th , which means that Nintendo could be planning a release in less than a month from now. 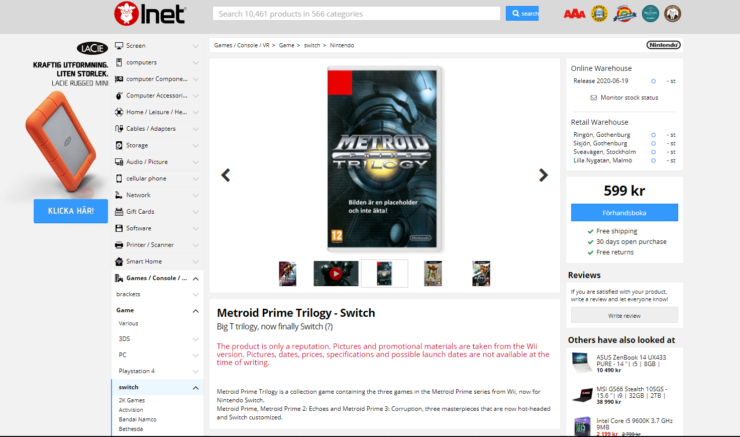 A release for such a high-profile Nintendo title seems unlikely, even more so considering that The Last of Us Part II is releasing on the same day. Then again, Nintendo announced a new Paper Mario for the Switch out of nowhere earlier this month as well, which also seemingly included a Metroid tease at the end of the trailer.

If correct, this would put Metroid Prime Trilogy between this week’s Xenoblade Chronicles Definitive Edition and Paper Mario: The Origami King.

New 2D Metroid and Paper Mario Arriving on Switch This Year, Leakers Claim; To Be Announced During Rumored Upcoming Direct

As with a retailer listings, however, take the information above with a fair grain of salt for now.

Experience all three epic Metroid Prime adventures in one game!

In this compilation that bundles all three landmark Metroid Prime games, experience the danger and high-intense action of facing space alone as you play skilled bounty hunter, Samus Aran.

In Metroid Prime, explore the world of Tallon IV and witness the deadly experiments performed by the remaining Space Pirates. In Metroid Prime 2, investigate the hostile activities between twin planets Aether and Dark Aether, and learn of their shared energy source that is vital to their survival. In Metroid Prime 3, discover the dangers of a sentient virus that has almost obliterated the Galactic Federation's network, and face the darkness within...