Tribes of Midgard Season 2: Serpent Saga Out Now on All Platforms 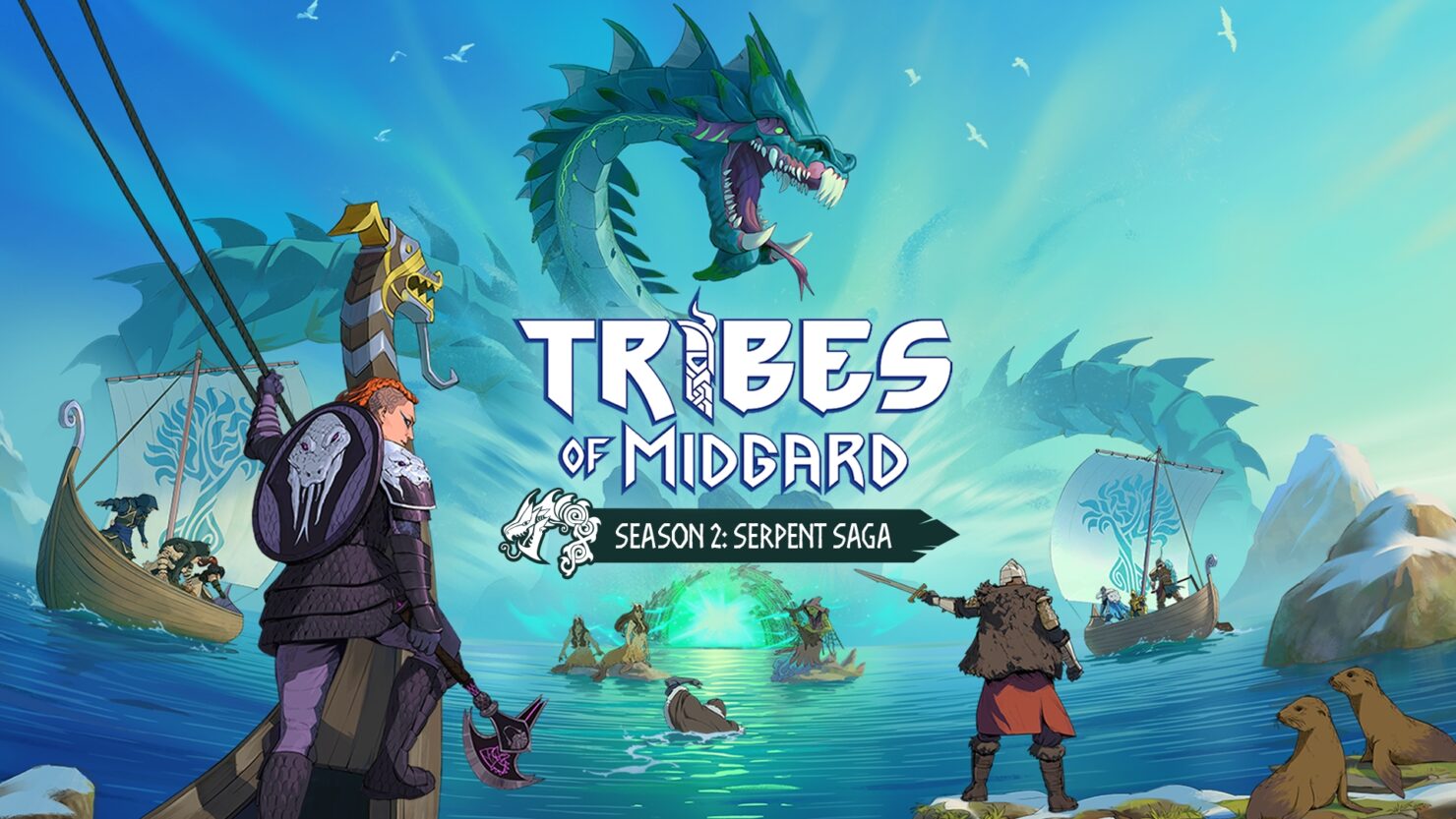 ● A New Saga Boss - Players now have another mythical beast to tackle before Fimbulwinter - Jörmungandr. The notorious World Serpent resides in his Lair at the heart of the ocean, and is notorious for his deadly poison, enormous size, and mastery of the seas. Take to the Open Seas to find all three Beacons to unlock Jörmungandr’s Lair, defeat the beast, and stop Ragnarök.
● Shipyard - Your Shipyard, located right outside your village on an Ash Beach biome, will need to be rebuilt to craft Boat kits and take to the seas! Smaller boats are flimsier, but are more nimble and require less materials. Leveling up your Shipyard unlocks larger boats that can hold more players, travel faster, and have more HP, but cost more resources. With different tiers of boats, players can choose the right boat for their playstyle.
● Boats - Vikings can now sail the seven seas by building and constructing Boats crafted in the Shipyard. Boats can be placed and built through your Construction Inventory, but only in the Open Seas off a coastline, shore or cliff - not in rivers or ponds. Grab your Tribe and sail the Open Seas to reach islands, or for a faster commute across Midgard.
● Swimming - For shorter trips, or on the off chance your ship takes a turn for the worse, Vikings can now swim in any body of water! While a quick lap or trip back to an accessible shoreline or Boat ladder is fine, swimming is limited by your Viking’s Stamina gauge - so make sure you’re back on your boat or dry land when that bar hits zero, or you’ll start taking damage until the water claims you.
● New Enemies - The islands of Midgard are home to a variety of new friends and foes that are like nothing your Tribe has ever experienced:
○ The sneaky Selkie disguises itself as a Seal and can use their mythical abilities to slow your attack speed and boost their own.
○ Enigmatic Fossegrim travel in groups and use their lyres to play magical songs that boost their nearby allies’ armor, attack and speed stats, or even revive them when they die. An exceptionally agitated Fossegrim can even play a song that siphons Viking’s Souls, so stay alert!

● New Runes, Armor Perks & Starter Kits - With new enemies and encroaching threats all around you, you’ll need some new tools to take them down!
○ Five new Runes bolster your options and provide new strategies. From the powerful unarmed combat boosts given by Nothing to Wield, to the explosive harvesting benefits from Harvest Boom, these new Runes give players even more options for customizing their Vikings.
○ Additionally, Saga 2 debuts the Armor Perks system. Every piece of Armor in Tribes of Midgard now contains an additional passive bonus. Each Perk is assigned to a particular Armor Set, so if you want to maximize a certain effect, you can equip multiple pieces from the same Armor Set to stack the bonus. You can also mix and match Armor Perks for custom builds and skills!
○ Six new Starter Kits to shake-up that early-game routine! Unlock these as you play through Saga 2 and find new ways to get an early jump on the Jötnar.
● Exploration - Explore the Open Seas and access uncharted islands off the shores of Midgard to find Merchants and new Beacon Camps filled with turrets and brand new enemies! The expanded map allows you to discover new lands full of resources, enemies, and loot. However, there is also a greater challenge, as you will have to traverse this expanded world to unlock and defeat the Saga Boss before Fimbulwinter.
● New Saga Quest - A new Saga Quest line will guide you on your journey to defeat Jörmungandr or Fenrir. To keep track of all the Quests available between both Saga Bosses, we’ve added a ‘Saga Quest’ section to the Village Quest Board.
● Timed Seasonal Events - Additionally, Norsfell revealed the upcoming three-week Yulidays event, where players can unlock cosmetics, a pet, and other festive goodies as a part of three limited-time Festive Challenges. Make sure to log in every week to unlock all the Yuliday drops - it’s the gift that keeps on giving!