Video games and Vikings go together like a battle axe and an unprotected skull. From God of War to The Banner Saga, to Assassin’s Creed Valhalla, the gaming realm has been overrun with Vikings in recent years, and now Tribes of Midgard from new Canadian developer Norsfell Games has come ashore with intentions of carving out its own kingdom.

Tribes of Midgard does things a lot of other Viking games do – survival, crafting, hack ‘n’ slash combat, big bad bosses – but does it manage to combine these familiar elements into something unique? The game has already managed to amass an impressive hoard of players (over 250,000 so far), but will its name be sung in Viking longhouses for years to come? Time to see if this one’s worthy of Valhalla…

As often happens in Viking games, Ragnarok is approaching and it falls upon you and your battle-hungry pals to push back the hellish monsters that seek to destroy the world. If you’re hoping for much story beyond that, well, you’re in for a disappointment. The world is ending and only you and your sword can stop it – simple and bleak, just the way Nordic folk like it.

You start Tribes of Midgard naked (save a loincloth, thankfully) in the middle of a procedurally generated map. From there, you need to get to work collecting crafting items and Souls, which act as a sort of universal currency in the game. You’ll have to move fast, because the game has a day-night cycle, and once night arrives hoards of shadowy Helthings will attack the Yggdrasil Seed, which sits at the center of a nearby village. Defending the seed is critical, as its destruction is the only way to lose the game (you simply respawn without your Souls and crafting materials when you die, and the latter can even be retrieved Dark Souls style).

And so, a cycle quickly sets in. Explore during the day, use crafting items to upgrade your character’s gear, the village’s defenses and merchants, and worksites that produce more refined resources, then defend the Seed by night. Eventually, you’ll unlock portals and building supplies like ramps and bridges that will let you delve ever deeper into the wilderness. Ah, but the game also throws you a few curveballs. Various time-sensitive events will occur and every few days a Jötnar (an elemental giant) will appear on the map and begin stomping its way toward your village. Let it reach the Yggdrasil Seed and you’re doomed. Your ultimate goal is to find the lair of the Saga Boss – during Season 1 it’s a giant wolf named Fenrir – and defeat them before the steady waves of Helthings and Jötnar overtake you.

Tribes of Midgard feels good to play, with responsive controls and combat that’s easy to pick up, yet satisfying. Hold down the attack button to hack and slash, and bust out the occasional dodge roll or special attack/spell and you’ll get through just fine. Combat is more Diablo than Platinum Games, but that isn’t necessarily a bad thing. The game’s visuals aren’t exactly breathtaking, but they’re colorful, easily readable, and get the job done.

Tribes of Midgar provides a very simple tutorial that will get you up to speed on controls, crafting, and defending the Yggdrasil Seed, but beyond that, the game can feel rather overwhelming at first. There’s definitely a right way and a wrong way to do things in this game, and it doesn’t really give you any hint as to what your strategy should be. Should you focus on collecting materials to start? Exploring? Upgrading your town? Doing quests? Preparing for the Jötnar? The game shrugs and lets you find your own way. Tribes of Midgar can be particularly intimidating if you’re playing alone, which I don’t recommend at all. I’m sure I’ll be proven wrong, but the game feels almost impossible solo. In my experience, you’re going to want a party of at least four, with somebody who knows what they’re doing who can act as the leader, but the more the merrier (you can have up to 10 players per game). Oh, and heaven help you if you try to hook up with randos via matchmaking – I suggest finding a group via the Tribes of Midgard Discord.

If you can find that right group, there can be a real sense of camaraderie while playing Tribes of Midgard. Coordination is key to success and all upgrade projects can be shared, so there’s a real feeling you’re in this together. For a game about axe-swinging Vikings, Tribes of Midgard can feel unexpectedly… friendly. The game also ratchets up the intensity nicely. Early days are relatively laid back, but nights get longer and more challenging as you continue until you plunge into eternal darkness around day 15. My successful runs through the game got downright frantic toward the finish line, with my party splitting their resources between fighting Fenrir, battling back Jötnar, and defending the village. I made it right up to the boss and failed more than a couple of times, which was a hard pill to swallow, but my eventual successes were all the sweeter.

That said, I wonder how many people will actually have that satisfying experience. I had the good luck of finding a group with people who knew what they were doing, but if I hadn’t, I’d probably still be struggling with the game today. Perhaps that will become less of a problem as guides and general player knowledge improves, but by the same token, there has to be a lot of clueless newbies flooding the servers too. An expanded tutorial or a matchmaking system that pairs experienced players with rookies (without a visit to the Discord required) would be appreciated.

There are also a number of other little issues that bring down the overall experience. New classes are unlocked by completing achievement-like challenges, some of which are simply too difficult. The game is still somewhat glitchy and cheesy deaths when exploring are fairly common, particularly since water instantly kills your Viking (a bit odd for a seafaring people). Also, this is a personal preference, but I’m not a fan of the game’s battle-pass-style progression system, behind which certain weapons and gear are locked. You can’t drop real money to progress the battle pass (although you can pay for optional cosmetics), but I’d rather just earn gear in the game through regular play without the grind.

That brings us to the general question of content – Tribes of Midgard launches with only the single boss, which you can reach and beat in about two to three hours. Most will take longer than that, and the battle pass and a Survival mode stretch the current content further, but the fact remains, there’s not all that much to this game at the moment. Norsfell Games are promising free seasonal updates that will add new bosses, gear, and places and events to tackle, but for now, this Viking saga feels a bit short of legendary.

This review was based on a PlayStation 5 copy of Tribes of Midgard provided by Gearbox Publishing. You can grab the game at a small discount here. 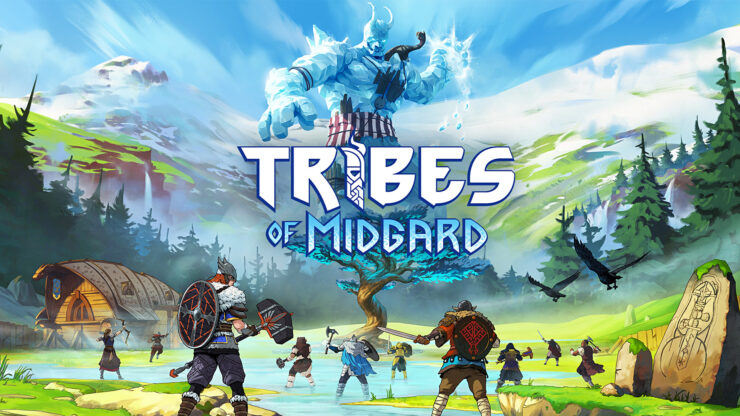 Tribes of Midgard can be a fun, satisfying, and surprisingly friendly action-survival experience, but without the right guide and crew, you might find yourself lost at sea. Dedicated Vikings may find treasure here, but for some, Tribes of Midgard will wear thin quickly – just another trinket for your pile of shame.