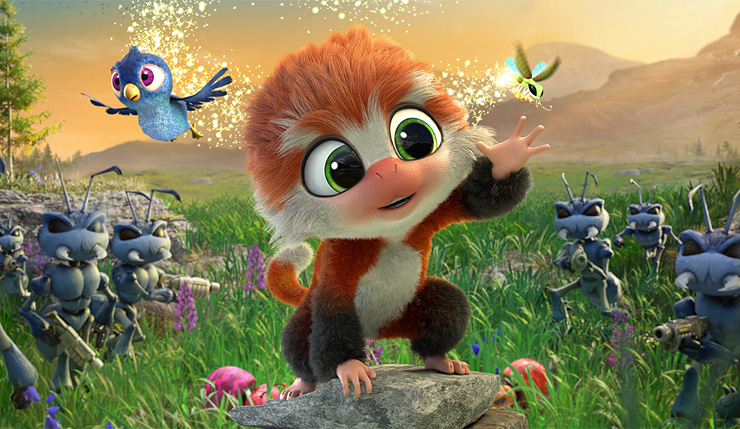 Hey, are you still holding out hope for a follow up to Rare’s Jet Force Gemini? If you answered “yes,” you’re on a short list, as JFG wasn’t one of Rare’s more successful games, but, believe it or not, it seems a successor is in the works! Developer Chameleon Games has just announced Tamarin, a third-person action-platformer in which you splatter armies of evil ants. So yeah, it’s totally Jet Force Gemini, except you play as an ultra-cute monkey instead of awkward-looking humans and their frightening dog. Sounds like an upgrade, if you ask me!

A variety of ex-Rare developers who have worked on games like Banjo-Kazooie, Battletoads, Diddy Kong Racing, GoldenEye 007, and Donkey Kong 64 will be handling character design and other pre-production duties on Tamarin, and the music will be done by the legendary Donkey Kong Country composer David Wise. You can catch a first glimpse of Tamarin in action, below.

Save Your Family From The Insect Invasion!

Explore an incredible interconnected 3D world, brimming with primate platforming and bug-splattering shooter action. Leap with the agility of a tamarin as you journey into the Northern wilderness on scenic routes through forests, fjords and mountains. Along the way you will chase mysterious electrical fireflies, discover a secret underground world of dancing ants, rescue innocent birds, and restore the tamarins’ once idyllic natural habitat.

We’ve seen various attempts to recapture the old Rare magic over the years, and most of them, like Yooka-Laylee, have been kind of disappointing. But hey, as a diehard N64 fan, I’m pretty much always going to give anything by ex-Rare devs a chance. I’ve also always had a soft spot for Jet Force Gemini -- as long as we don’t have to collect any goddamn Tribals this time around.

Tamarin scampers onto PC and PS4 sometime this summer.