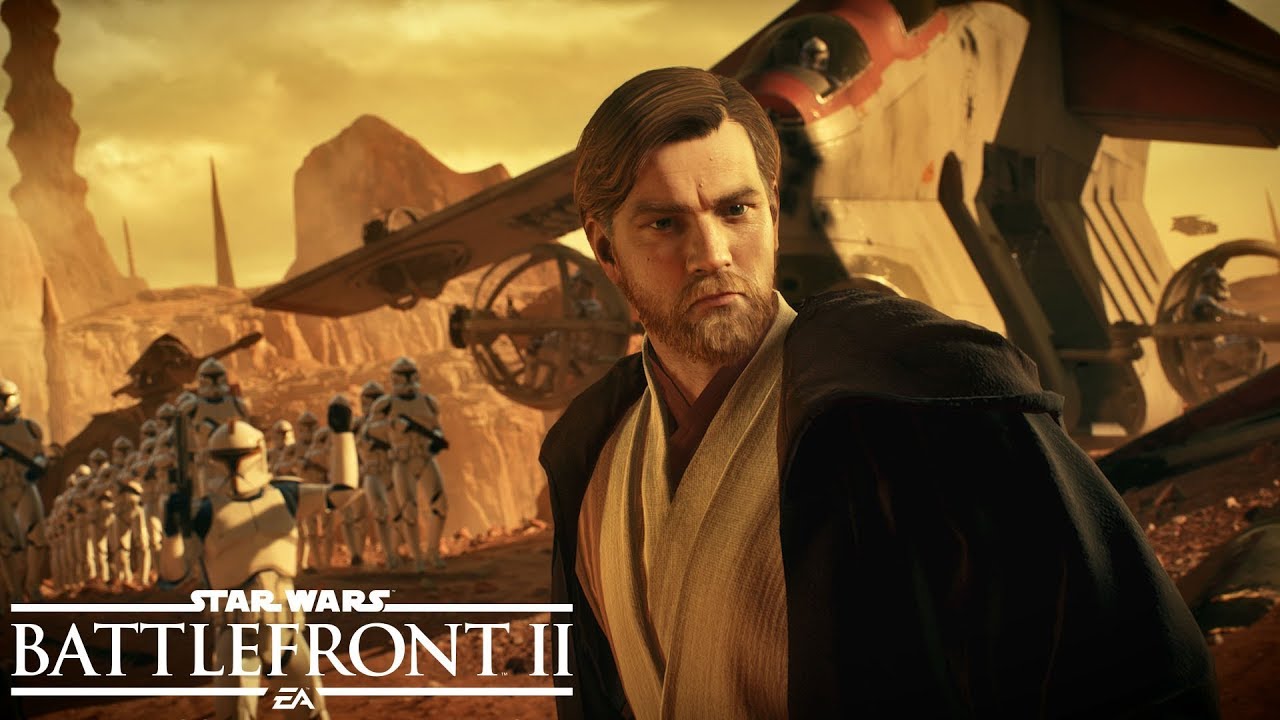 It's certainly the perfect time to try STAR WARS Battlefront II if you haven't already. The developers have now released the Battle of Geonosis update, which adds to the game fan-favorite Jedi Master Obi-Wan Kenobi and more content. As a reminder, EA Access costs $4.99/month or $29.99/year.

With General Grievous arriving last month, it’s only fitting that the Jedi with whom he regularly clashed joins the battlefront. Say “Hello there” as Jedi Master Obi-Wan Kenobi joins the roster of heroes in Star Wars™ Battlefront II, ready to face off against General Grievous and others.

We’re incredibly excited to be bringing one of the most requested characters to date into Star Wars Battlefront II and we can’t wait to see him in action.

Obi-Wan Kenobi will cost 35,000 credits (and will not be available via crystals). He will also come with an additional appearance, “Robed”, which will be classified as Epic and cost 40,000 credits or 1,000 Crystals.

The 212th Attack Battalion will be priced at 20,000 credits or 500 Crystals each, and available for Assault, Heavy and Specialist classes for the Galactic Republic. If you’re looking to pick up all three appearances, you’ll be able to take advantage of a bundle that costs 40,000 credits. This special bundle will be available from within the crate menu.
You can read more about Obi-Wan Kenobi, including his abilities, emotes, victory poses, voice lines and the 212th Attack Battalion by heading to this dedicated Community Transmission.

Galactic Assault gets a new battlefront in the form of the planet Geonosis.

Step onto one of the largest planets we’ve created for Star Wars Battlefront II and become part of the history of one of the Clone Wars most iconic and important locations.

At the heart of the Geonosis experience is the AT-TE. This six-legged armored walker is fully controllable and plays a vital role on the battlefront. Clone Troopers will want to protect their AT-TE’s at all costs, while the Droids will need to do everything they can to stop their advance.

We went into detail on Geonosis in its own Community Transmission, which you will find here.

Alongside the AT-TE, two other vehicles will be arriving on Geonosis. Both the BARC and STAP speeders are fast and agile, allowing for accelerated movement around the battlefront. What they lack in durability they make up for in speed; the perfect set of vehicles for traversing the Geonosis landscape as quick as possible.

Want to know more about the new vehicles coming as part of the Battle for Geonosis update? We’ve got you covered.

Not to be outshined by Obi-Wan Kenobi, General Grievous will also be receiving a brand-new appearance in this update.
Enduring punishment unimaginable to any organic being, General Grievous pursued the obliteration his enemies whatever the cost. Frequently broken beyond repair, Grievous's cybernetics were easily replaced but his conquests would stand the test of time.

This is a brand-new look for General Grievous, never before seen in Star Wars and we’re incredibly excited to seeing it in action on the battlefront.

The Shattered Armor Appearance for General Grievous will be classified as Legendary and cost 80,000 credits or 2,000 crystals.