There's nothing quite like some Pie to liven up your holidays. Galaxy S9 and S9 Plus owners will be pleased to know that Samsung is beginning to roll out a stable Android Pie build to both devices. The update comes about a week earlier than Samsung's promised milestone of January 2019. We're not complaining, though. It isn't surprising in the slightest, considering that both devices received the fourth iteration of the beta version only a few days ago. This time around, it isn't just the beta testers getting a slice of the pie. Users on a stable Oreo release have reportedly begun to get the update as well.

The update is available only in Germany 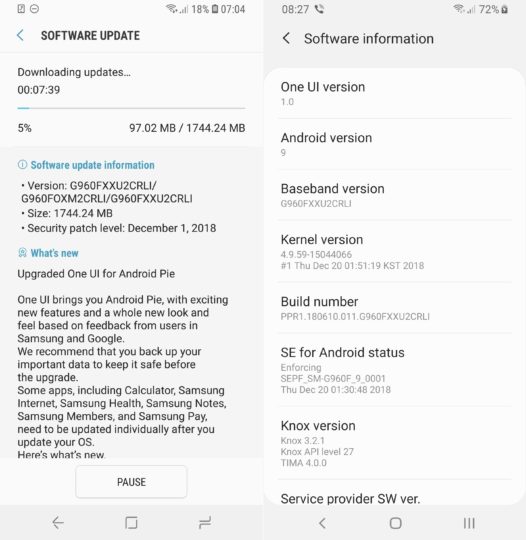 Sammobile first spotted the build in their forums, where several members had downloaded it OTA. Like most of Samsung's releases, the update is rolling out in the German market. It is only a matter of time before international variants receive it. Depending on where you live, it may take up to a week for unlocked versions. Carrier-locked versions are at the mercy of their carriers, though. The software is also available on Samsung's servers, but sideloading isn't an option just yet.

You can attempt to manually trigger the update from the Settings » Software update menu by tapping the Download updates manually option. The software version for the final update is G960FXXU2CRLI and G965FXXU2CRLI for the Galaxy S9 and Galaxy S9+ respectively, and it weighs in at about 1.7GB. It has all the standard Android Pie features such as App Actions, Slices and Navigation Gestures along with a completely redesigned UI based on the company's new OneUI design scheme.

Although I welcome an early update as much as anyone else, I sincerely hope that the build is free from some of the bugs that plagued the open beta. But, it isn't like Samsung to rush an update for the sake of it, so I'm optimistic. Watch this space for a post on how it looks/feels once I download the update on my personal Galaxy S9+.