Update: Contrary to Jason Schreier's comments, Insomniac's next game will be a Spidey game, but it isn't Spider-Man 2. Get the lowdown on Marvel's Spider-Man: Miles Morales, which is coming to PS5 this year.

Original Story: What is the next game coming from the super-talented folks at Insomniac Games? After Insomniac was acquired by Sony in 2019, rumors began to swirl that a sequel to Marvel’s Spider-Man was in the works, which I’m certain is happening! That said, according to reliable insider Jason Schreier, a new Spidey game is not the next thing coming from Insomniac. Schreier seemingly revealed this in a Twitter reply, which he promptly deleted, but, as always, the Internet never forgets… 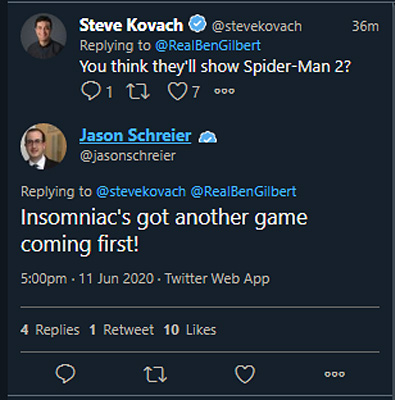 So, if Spider-Man 2 isn’t the next thing from Insomniac, what is? A new Ratchet & Clank game would certainly make sense, as Sony usually likes to launch their systems at least one major family-friendly title. That said, Insomniac also recently seemed to tease something related to their long-neglected Resistance franchise. Of course, there’s always the possibility the studio is working on something totally new!

We probably won’t have to wait long to find out what Insomniac’s next thing is – expect it to show up at today’s PlayStation 5 reveal event, which kicks off at 1pm PT. Here’s a bit more detail about the event:

We will soon give you a first look at the games you’ll be playing after PlayStation 5 launches this holiday. The games coming to PS5 represent the best in the industry from innovative studios that span the globe. Studios, both larger and smaller, those newer and those more established, all have been hard at work developing games that will showcase the potential of the hardware.

This digital showcase will run for a bit more than an hour and, for the first time, we will all be together virtually experiencing the excitement together. […] This pre-taped program will be broadcast at 1080p and 30 frames per second. This eased the show’s production process during a time when many of our team and developers are working from home.

So, what do you think? What’s coming next from Insomniac Games? What do you wish they were making?