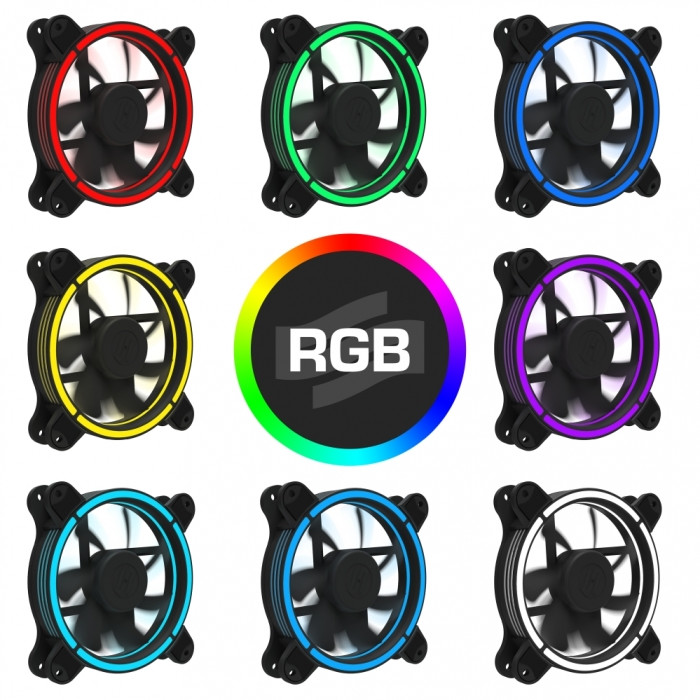 SilentiumPC has announced its new Sigma Pro Corona RGB 120 Kit, like all other recent fans that have been released in the past year or so has fans that will show off the RGB revolution that has enslaved us all. The kit includes three 120 mm Sigma Pro Corona RGB fans and a tiny yet powerful Nano RGB controller. Built-in inside the ring-shaped casing there are 18 bright RGB LEDs that enable the user to choose from any color to create stunning lighting effects. Three methods of controlling these effects are available.

First, manually, using the included Nano RGB controller which has several pre-defined modes, from constant lightning, through slow, gradual color change and breathing to aggressive strobe. Additional button speeds or slows down each of the effects and can also turn the illumination off completely. Next option is using the Aurora Sync controller available in SilentiumPC Armis TG RGB cases.

Despite still being heavily focused on aesthetics, the airflow characteristics are not compromised says SilentiumPC. It will have a fixed speed of 1,500 RPM is carefully set for optimal noise rating, offering steady airflow of 33.3 CMF of air pressure at 12.9 dBA. The Hydraulic bearing ensures smoothness and reliability. The rotors are easily removed for cleaning and maintenance allowing simple maintenance for the end user. Rubber grommets in the corners of the fan-frame offer optimum absorption of vibrations.

The new SilentiumPC Sigma Pro Corona RGB 120 Kit for a pack of three fans will be available in the middle of July at 25,90€ including VAT in Europe. And the United States Price should be under $40