Samsung is one of those companies that are somewhat notorious for delaying the software updates to their devices for one reason or the other. However, looking at the past trends that the company has been following, it is safe to say that things are looking better.

We first started noticing a change when the company pushed the Android 10 update for some of the older devices. Samsung then started pushing out updates for the Galaxy S20 series that addressed the camera autofocusing issues, as well.

The latest news talks about how the One UI 2.1 might be making its way to the Galaxy S10 and Note 10 series of devices. We already knew that Samsung will be releasing this update on the older devices, as well. However, previously, there was no timeline as to when the updates will be making their way.

One UI 2.1 Will Bring Features Such as Quick Share, Accompanied by Some Other Minor Changes

The One UI 2.1 is primarily made for faster refresh rate displays and it is available on the Galaxy S20 series as well as the Galaxy Z Flip. In terms of features, it does not bring a lot to the table. However, you do get Quick Share, a feature that is much similar to Apple's AirDrop and lets users share the files faster if they are on the same Wi-Fi network.

The information comes from a forum moderator who has stated in a reply that they are currently working on the three versions of the Galaxy S10 as well as the 5G variant, and they are currently trying to release the update in three weeks. The text is translated, that is why it might seem a little off. Below is a screenshot that you can check. 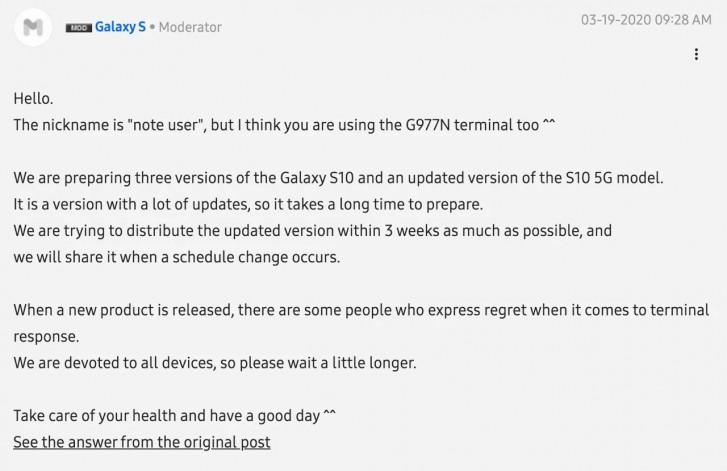