Google has been trying to push its partners to be more proactive in sending Android security updates to their consumers. Since the discovery of a major security threat, Stagefright which put over a billion of Android users at risk, there has been a lot of uproar from the users as well. As Apple leads the game when it comes to sending timely and consistent security updates and Microsoft, with its nascent Windows 10 Mobile, intends to take charge of OS updates, all the eyes are then pinned at Android and how it moves forward to offer more mobile security and privacy to the users. 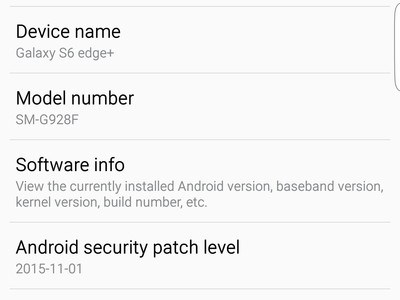 Google's OEM and carrier partners committed to send monthly security patches to their users, released by Google. Among these, Samsung also promised to keep its "high-end" devices up-to-date with security updates. However, it wasn't until now that you could actually see Samsung being more proactive about it. After the Stagefright-episode, Google introduced a security feature in Android 6.0 Marshmallow that showed the date the device last received a security update, in order to put more pressure on its partners giving them public visibility. As reported,

This security update date would let the users know when their devices last received the security update, promised by many manufacturers. While it is not an aggressive measure from Google to push mandatory monthly updates, the tactic will help put some light on those who are lagging behind in sending out these updates.

Latest Lollipop update rolled out to Samsung devices has now updated the About Phone section of the Settings menu which shows exactly the same Marshmallow feature - the date of last security patch delivered to a device. Folks at Android Central report that Samsung Galaxy S6 Edge+ builds (G928FXXS2AOK9) in Europe and Galaxy Note 5 (N920CXXU2AOK6) users in the Middle East have confirmed this new security addition.

Similar to Android 6.0 Marshmallow, the new Lollipop firmware on Samsung devices shows a field "Android security patch level," showing a date when the phone last received a security update from Samsung. To confirm if you too have received this latest feature, go to Settings, and scroll down to About Phone. Don't forget to let us know which Samsung device you own, if you too have received this update.