It's that time of the month again when Google releases its monthly security patch for Android. This month is what every patch is meant to be, a garden variety software patch that fixes. It also brings forth some Android 10-specific changes for Pixels. There are eight issues resolved in the October security patch. Vulnerabilities range from Moderate to Critical, with the most severe relating to the media framework and a remote attacker possibly executing arbitrary code through a crafted file.

Google notes that “no critical security vulnerabilities affecting the Android platform were publicly disclosed without a security update or mitigation available for Android devices.”There was also an 84% jump in security patches during Q4 2018 compared to last year. This build also addresses an issue on the original Pixel and Pixel 2 discovered by Google’s Project Zero team that could give attackers full device control if a malicious app is installed. Here are some of the aforementioned Pixel-specific changes. 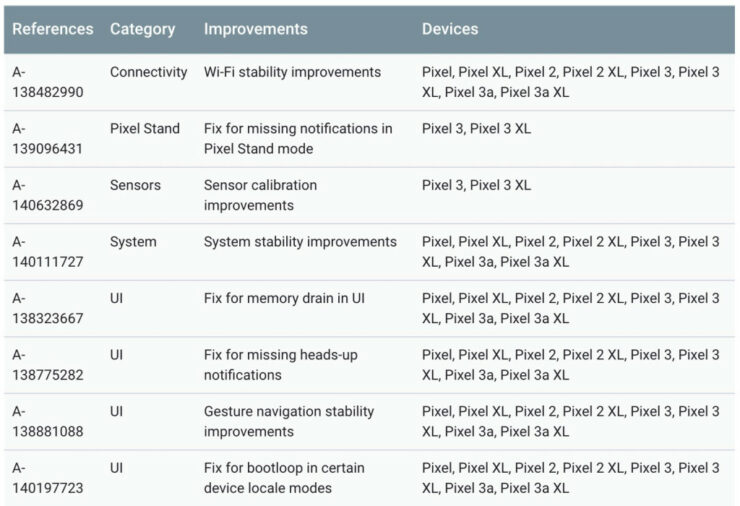 Most of them appear to be minor QoL changes that aim to mitigate the performance hit resulting from Android 10. Some of the more pressing issues include “memory drain in UI,” “boot loop in certain device locale modes,” and “missing heads-up notifications.” General “System stability improvements” are also touted in this Android 10 Pixel patch, along with “Wi-Fi stability improvements” for all eight phones. The patch should be making its way to all eligible devices in the coming days. If you can't wait, here are the download links for OTA/factory images.

Even the Essential Phone is at the receiving end of the same patch and it should be available for all users soon.