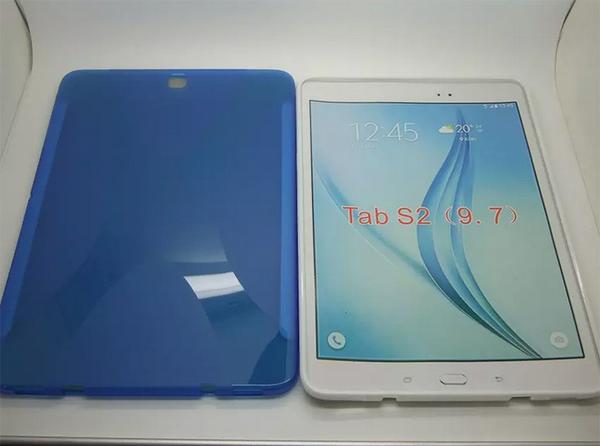 Courtesy of Onleaks, we've managed to get our hands on some case pictures of the Samsung Galaxy Tab S2. The three images belong to the 9.7 inch variant of the device and if they're authentic, then Samsung's tablet is going to be quite thin indeed. The notorious leaker hailing from France has already posted a render of the Galaxy Tab S2, and after today we can compare both of these together to get a better idea about Samsung's upcoming offering.

The Galaxy Tab S2 is expected to come with a premium metal body and an all new design. Several ports for the device are visible on the case images leaked as well. These show what appears to be a USB port, a headphone jack and allocations for the volume buttons, as can be seen above. Case leaks do end up up providing us with several key details and are quite common in the smartphone/tablet world. Manufacturers often start manufacturing cases for unreleased devices which inevitably find their way into the hands of a couple of sources. So take a look at the Galaxy Tab S2's case images and let us know what you think in the comments section.