Samsung might have reduced its dependency on Qualcomm by choosing to use its own homegrown Exynos 7420 in the Galaxy S6 duo, but the latest leak surrounding the company’s upcoming product states that the company might be eyeing Intel’s mobile chipsets in favor of Qualcomm’s. Featuring the codename CHOPIN-LTE, a device of unknown purpose (smartphone or tablet) has been spotted in Geekbench today.

So far, there is yet to be a single mobile device bearing the South Korean smartphone giant’s logo that has been incorporated with 4 GB of RAM, so in the near future, you guys might bear witness to something along the lines. The one particular detail from the Geekbench report that left us scratching our heads was the fact that the mystery product is running Intel’s Atom SoC. More specifically, the chipset was listed as Atom x5 Z8500, which has been manufactured under the 14 nm Cherry Trail process.

According to the report, the ‘system on a chip’ is running four processing cores, with each core running at a frequency of 2.24 GHz, and is going to be supplemented by an 8th generation Intel graphics chip. Given below are the scores that were obtained from the test: 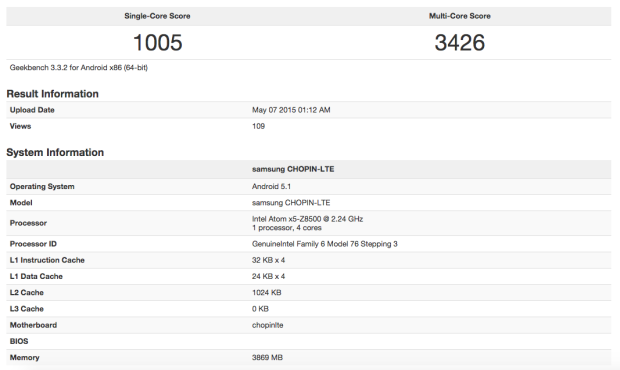 According to the scores, the product delivers performance equivalent to Galaxy Note 4. In other words, what that means is that the product featuring the codename CHOPIN-LTE just might be Samsung Galaxy Tab S2. Unfortunately, confirmation of these details can only be given when Samsung showers it in the spotlight and makes the official announcement.

Imagine a Samsung tablet running an Intel Atom SoC. If the leak turns out to be true, then Qualcomm must be absolutely livid.