Samsung's quite eager to feature in the news over the past couple of days it seems. After the Korean manufacturer launched its Galaxy S6 Duo earlier this year, word related to its tablet launches for this year has started to surface at an increasing pace. We should be expecting four more devices from the Korean manufacturer this year, in the form of two variants of the Galaxy Note 5 and two variants of the Galaxy Tab S2. Today's second leak is related to the Galaxy Tab S2, after we saw the Galaxy Note 5 Edge appear at html5test site earlier. 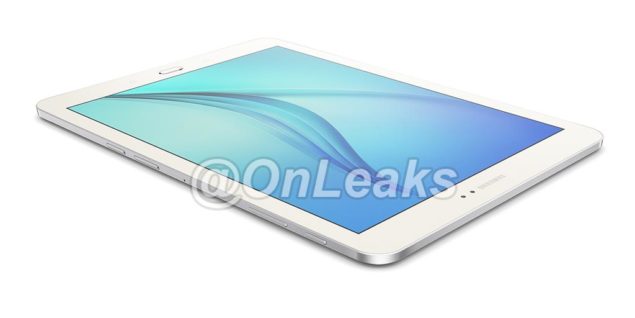 Samsung's Galaxy Tab S2 is expected to be launched in two variants, in a manner similar to its predecessor. They will be of screen sizes 8 and 9.7 inches respectively, and today we get to take a first look at what Samsung's 9.7 inch slate can be expected to look like. Posted by avid leaker Onleaks, the Galaxy Tab S2's render above appears to confirm what we've been hearing about the device so far. The effects of a premium metal finishing on the device is evident as the device looks to have a sleek metal design. The ambient light sensor and the front camera also have changed positions and now appear on the right of the earpiece.

We also see the volume rocker present on Samsung's slate and looks like the Galaxy Tab S2 coupled with a power/reset button at the right. There appear to be several changes from the Galaxy Tab S' design as this time we don't get to see a USB connector dock at the right of Samsung's tablet. There are what appear to be a SIM card slot and a Micro SD slot on the tablet's right. The home button also seems to have switched places on the Tab S2 this time around, and looks like the default orientation for Samsung's device will be portrait this time around. No buttons appear to be present on the top of Samsung's device either so we'd be expecting the USB power slot and other features on the bottom and the left side of the device. And while Onleaks is well known for his leaks, we'd still wait for more features to surface before we know for sure what Samsung's upcoming tablet has to offer. The home button changing positions is a drastic change from the last Galaxy Tab S and we're wondering at how many other changes Samsung would have under the works. Stay tuned and let us know what you think in the comments section.