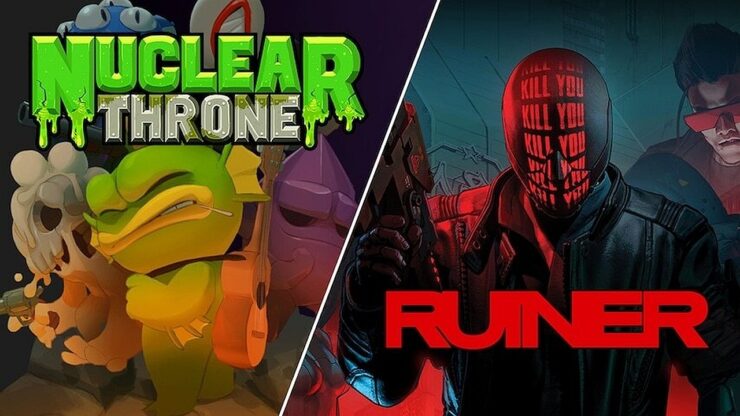 RUINER and Nuclear Throne are the latest free games available via the Epic Games Store. You'll be able to permanently add them to your library until November 14th, when the next free game (The Messenger by Sabotage Studios) will take over the promotion.

RUINER, normally priced $19.99, is a top-down brutal 'action shooter' released by Reikon Games about two years ago. We rated the game eight out of ten at the time, with the following summary:

For only £15/$20, you really are getting your money’s worth with RUINER. I finished my first playthrough of the game in just over four hours. It’s important to remember half of this playthrough was on Easy (meaning I rarely died) and I didn’t attempt any of the side quests. My second playthrough on Normal was much slower and I’d argue it was better thanks to the New Game Plus aspect. Even if you don’t go back to the game after finishing it once, there’s plenty in that four-hour experience for you to enjoy. RUINER is a no brainer if you are interested in fast-paced action games that require real skill to truly perfect.

Nuclear Throne (normally priced $9.99) is a bit older since it released in 2015. It is also a top-down shooter, though of a very different kind compared to RUINER. Here's how the developers at Vlambeer summarized the game:

Can you reach the Nuclear Throne?

Nuclear Throne is a post-apocalyptic roguelike-like top-down shooter. Not 'the final hope of humanity' post-apocalyptic, but 'humanity is extinct and mutants and monsters now roam the world' post-apocalyptic. Fight your way through the wastelands with powerful weaponry, collecting radiation to mutate some new limbs and abilities. All these things and more you could do if only you were good at this game. Can you reach the Nuclear Throne?